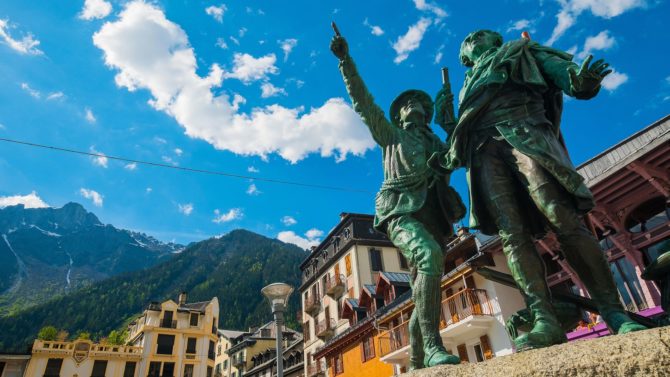 Until the summer of 1786, human footsteps had yet to taint the snow on Mont Blanc’s summit. So far, France’s fearsome White Lady had met any foolhardy explorers who dared to conquer her with disdain – that is, until two Savoyards strode into the history books. In doing so, Jacques Balmat and Michel Paccard became the forefathers of alpinism – a discipline that would take France’s sporting achievements to new heights.

The first ascent of Mont Blanc

A crystal collector and chamois hunter may not be the occupations you might expect of a pioneering adventurer, but for 26-year-old Balmat, this work had been perfect preparation for the mountains. When the Genevan geologist Horace Bénédict de Saussure offered a prize for the first person to successfully summit Mont Blanc, Balmat’s appetite for the challenge was stoked. De Saussure had tried and failed in his own attempts to scale the mountain, and the winner would have to accompany him on a future climb.

Armed with none of the fancy gear of today’s climbers, but some brandy and some bread for sustenance, Balmat first embarked on the trial of a lifetime in July 1786. Unfortunately, the Alps’ inclement weather would put a stop to his hike, but he was undeterred. The following month – buoyed by yet more brandy – he persuaded a fellow walker, Paccard to accompany him in his pursuit of the summit.

While Balmat hailed from a peasant family, Paccard was a doctor with a keen interest in science. The pair had already made several unsuccessful tries at summiting Mont Blanc several years earlier, but perhaps the thought of a prize was the boost they both needed. This time, Balmat came equipped with a long wooden pole that would help tackle the lethal icy crevasses that littered the slopes.

Whether it was the new equipment or better weather conditions, Balmat and Paccard’s next attempt would finally be fruitful. They left Chamonix on 7 August, 1786, and reached the top the next day. “I had reached the goal where no one had as yet been – not even the eagle nor the chamois,” Balmat later remarked.

Alpinism is an intrinsic part of French heritage; so much so, it was added to Unesco’s Intangible Cultural Heritage list in 2019 (shared with Italy and Switzerland). From the forested slopes of the Massif Central and the Vosges, to the peace of the Cévennes and the drama of the Pyrenees, the country’s vast range of peaks tempt climbers from the world over to tackle them. Although the discipline flourished in the 19th century – the term first appeared in 1877 – the first big steps were made by the likes of Balmat and Paccard towards the end of the 18th century.

Alpinism’s south-west cousin, Pyreneism, is a proud sport in its own right; clubs and museums dedicated to the two can be found across France’s mountainous heartlands. While both disciplines may have once been a male-dominated pursuit, both men and women are welcomed at the clubs alpins. French women are some of the climbing world’s biggest names. One of the most noteworthy members of the Club Alpin Français is Catherine Destivelle, who found her feet learning to boulder in Fontainebleau forest. In 1992, she became the first woman to conquer the Eiger’s north face, a fearsome climb.

Back in the 18th century, Paccard later married Balmat’s sister, while Balmat went on to climb the mountain with Saussure. He later published an autobiography, The First Ascent of Mont Blanc, that was criticised for downplaying Paccard’s role in the climb. Regardless, both men played an indubitable role in the birth of alpinism and inspired a league of future mountain explorers to don their hiking boots.

Previous Article 2022 French Property: A house in France for each month of the year
Next Article How were madeleines first created?