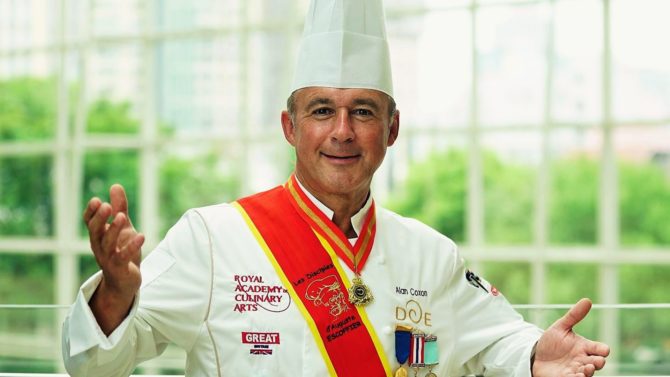 Celebrity chef Alan Coxon moved from England to Nouvelle-Aquitaine and delights in the stunning, fresh ingredients, fine wines and scenery on his doorstep

When did you move to France and how did you choose the region?
I have been in Nouvelle-Aquitaine for around five years. It was by chance that I fell upon the area when I was invited to try out a boat for five days on a nearby canal, meandering down the river, stopping off at small villages en route to collect the bread and croissants for breakfast or a relaxed lunch. Trees hanging into the gently flowing water’s edge while kingfishers darted around flashing their brilliant shimmering feathers in the morning sun, need I say any more? It was one of those perfect moments where everything fell into place, in fact I loved the area so much I decided to return by car and investigate a little further. There is such a food-orientated attitude and approach, a quality of produce second to none, mixed in with a good dollop of romanticism of times gone by, fairy-tale castles, lordly manor houses all surrounded by rolling hills and vineyards.

What do you love most about where you live?
Absolutely everything! The fact that nobody asks what I do for a living, judges me by the car I drive or clothes I wear, but takes me for who I am as a person, was extremely refreshing. Everyone talks about food, and I have had so many conversations with strangers about ingredients it is incredible. The village where I live, near Bergerac, has one of the best food markets in France and we are blessed with so many stunning ingredients from duck confit, truffles, walnuts and prunes to cheeses, geese, nut oils… the list goes on and on, not forgetting that I am surrounded by vineyards and some of the finest wines in the world from Saint-Émilion, Duras, Bergerac, Bordeaux and Graves. We have so many outdoor evening events all based around fresh seasonal foods, wines and local music and good humour. With long trestle tables nestled under illuminated trees in the village square and live bands playing, the opening conversation with strangers is always about the wine you are drinking (as opposed to the weather).

Did you always know you wanted to be a chef?
From the age of 12 I was inspired and intrigued by the food industry, possibly due to watching my grandmothers prepare food at home. Every weekend I would visit and would be engrossed with my great-grandma’s oven built around the central solid fuel open fire. At 14 during school holidays and weekends, I took on a job as a waiter. At 16 I went to catering college in the Isle of Man and moved straight into the kitchens working part-time. Upon completing my course aged 18 and with a few years’ experience already, I travelled to Monte Carlo to work at the Loews Hotel (now the Fairmont). The rest, as they say, is history.

What was it like working at Disneyland Paris?
Euro Disney was one of the greatest learning curves and experiences ever. I was in charge of the largest four-star hotel in Europe looking after 1,098 rooms, three restaurants, three function suites, room service, all food ordering and 68 chefs. The night before opening I was also in charge of an outdoor function based around the lake for 10,000 celebrities from around the world including Eddie Murphy, Cher, Bob Geldof and boxing legend Henry Cooper. Thousands of live lobsters for my menu had a police escort from Paris, the volumes of sauces were so large that they were being mixed using boat oars while the breakfast room on the morning after looked like a Hollywood party!

Who is the most famous person you’ve cooked for?
I have been privileged to cook and work with so many famous people, both as a chef and also on TV. The most famous I would have to say was Prince Charles, although in terms of royalty Grace Kelly and Prince Rainier also have their place! Musically it would have to be Frank Sinatra, Sammy Davis Jr, Michael Jackson and Donny Osmond. From the world of politics, the former Prime Minister John Major, from the world of sport, South African rugby player Francois Pienaar and also Zola Budd.

Which French chef do you most admire?
I actually have two that have formed my views and inspired me. The first being a chef called Fernand Point and one of the greatest chefs of all time. Fernand was in effect the father of modern French cuisine and who founded the restaurant La Pyramide in Vienne. He was the first ever French chef to be awarded three Michelin stars that were also retained for 53 years. He trained legends such as Paul Bocuse and Alain Chapel and wrote a book called Ma Gastronomie. My second is Alexis Soyer, a French chef who moved to work in England around 1831 and became Britain’s first ever celebrity chef. He had so many incredible achievements and such an extraordinary life, his story is one of love, passion, dedication, creation, success and heartache. My hope one day is do a TV documentary on the life of this man, this chef and incredible person.

More in Celebrities in France, Living in France

Previous Article Find out what’s inside FRANCE Magazine’s December 2021 UK issue
Next Article Halloween: Did you know there’s a Night of the Witches in the Loire Valley?