Halloween: Did you know there’s a Night of the Witches in the Loire Valley? 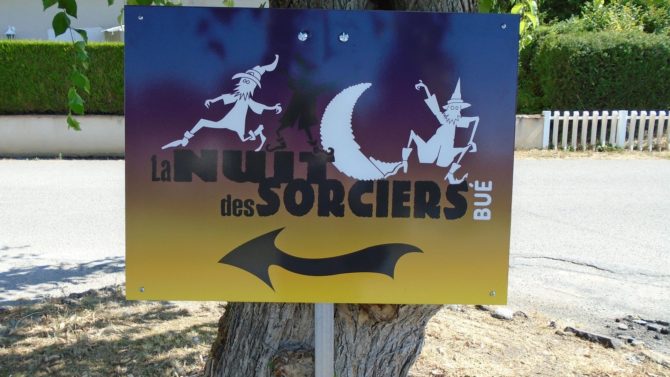 Halloween comes early in France with this spooky summertime festival, held each year in August. But how did it come to be?
The village of Bué, 5km south of Sancerre, rarely makes an appearance in French guidebooks and if it does, it’s usually in connection with the grape. It lies in the bowl of a valley surrounded by vine-threaded limestone slopes cultivated by its 300 or so inhabitants. The place is steeped in wine. During the Middle Ages, large tracts of land were owned by the monks of Chalivoy Abbey, who celebrated the ‘divin’ of the Holy Communion with goblets filled with their local ‘vin’. Paradoxically, it was a man of the cloth who introduced the first ‘Nuit des Sorciers’ to the village in 1946 and it was this annual August festival I had come to see.
I arrived in Bué on a Friday afternoon, the day before the witches and ghouls came out to spook me. Winemaker Dominique Roger drove me round the hills in a 1940s American jeep, taking me through tunnels spun from sylvan shadows, climbing up to the crossroads of ‘Marloup’ – the crossroads of the ‘bad wolf’. Here, at what felt like the edge of the world, Dominique told me the story of the witches of Bué.

War wounds
It all began in the 16th century when the kingdom of France was torn apart by the Wars of Religion. The Huguenot population of nearby Sancerre were holed up in their hillside fortress against the king’s army for eight months. Against this febrile backdrop, seething with attacks and enmity, a group of village men were accused of practising witchcraft at the Marloup crossroads by a 12-year-old boy. The men were tortured, stood trial at the Château de Beaujeu, found guilty and hung then burnt at the scene of their crime in 1582.
Centuries later, when another war had devasted France, abbot Joseph Barreau and storyteller Jean-Louis Boncoeur, set about healing village life with a fête. “Fête de quoi?” the priest had wondered. “Une Fête de Sorciers.” someone suggested. This may not have been what the abbot had in mind but the idea took root and the ‘Night of Witches’ was born.
During my research, I read that the first fête in 1946 mirrored the conflicts of the Second World War and the desire for peace. There were folk dancers in traditional costume, music, a procession and feasting, but also a theatrical performance dramatising a dispute between winemakers and the witches, who were accused of bringing disease to the vines and livestock. Mildew, Fluke and Cholera make an appearance as characters, illustrating how blight was feared in this agricultural community and how easily someone could be condemned for causing it. The play twists and turns before culminating in a peace pact between the factions, sealed with a bottle of Sauvignon Blanc. This narrative has vanished from the contemporary incarnation, which is largely wordless and concerned more with ambience, but many of the elements I saw would be recognisable to audiences attending the first festival.

Fright night
In the morning, I walked the chalk paths with the sun bouncing off the stones to see the Marloup crossroads by daylight. I stopped for a glass of water at the cottage of a 92-year-old who was sitting outside watching the road through the fields. She sees everyone who enters and leaves this village, where she was born. Among the green vines, the road looks luminous. “There’s always a storm before the fête,” she confides, as I glance up at the darting swifts.
When I reach the crossroads, I find a tree and a sign pointing in the directions of Menetou, Sens-Beaujeu and Aubigny. It is an empty place where few cars pass. To the right, in a field of straw and exhausted soil, stands a steel cross with the words ‘Jesus have pity on us’.
By 7pm, the heat had waned and visitors had started to arrive in the west-facing field of Creux de Marloup. It was peculiar and contradictory to see witches wearing their spire-shaped hats in high summer, ladling green lizard juice from a cauldron into cups. In place of autumnal mists, smoke wafted across from lumps of pork roasting on a spit and in the well of a bright blue sky a crimson hot air balloon floated by. There was a bouncy castle, a dance floor, a stage and marquees where people settled at trestle tables for the feast.

After 45 minutes or so, a procession of performers burst into the field: disruptive, devilish women wearing horns on their heads carried brooms, which they used to flick the hair of unsuspecting children as they passed. Next came lumbering, pogo-jumping fauns; two werewolves in stiff black wigs and a dragon on stilts whose glass bulb eyes and spines lit up in the falling darkness while smoke streaming from its nostrils mixed in with the fire of the barbecue. This was the Cabaret Sancerrois and they gave us spellbinding spectacles where a contortionist bent her body into so many unnatural shapes she ceased to be human, and a fire-dancer prettily wove her fans of flame. Later, I saw them having supper in one of the tents. The fire-dancer was smoking a cigarette at the bar and next to an acrobat was an old-fashioned hooded pram, presumably holding a baby. I didn’t get a chance to see if it had horns and a tail.

Into the night
The cabaret finished, the crowd, grown to 1,500-strong, moved out of the field to a mud track in the shadow of a vine-cloaked hill. By now it was very dark, and ahead of us on the crest of the slope we could see tiny luminescent bodies taking up their positions at the start of each tendrilled lane, looking eerily like maggots stirring in the earth.
These were the phantoms, or ‘birettes’, to use their regional name, and they crept down the hill in an arrow formation like an invading army. Each birette, dressed in a white sheet and death skull mask, held a flaming torch while ominous music sounded out to the moonless stars. Halfway down, they paused and a high-pitched cackle screeched across the leafy swell as the effigy of a witch careered across a zip wire. A disembodied voice warned, “Watch out! You’re going too fast!” and a comic book crash followed.

A farm tractor with first aid cross plastered to its front, rumbled down the path to collect the effigy and conveyed it to a clearing where it was tethered to a stake. The phantoms gathered to dance round it, dipping in and out like some ghoulish hokey-cokey. As they circled, they torched the witch who instantly vanished in a blaze of flame.
The burning done, the birettes stood motionless with their backs to us, looking up to the sky. Following their gaze, we saw in the distance a tiny spray of water and then, unexpectedly, the vast ancient blackness crumbled into showers of sparkle and glitter and the whole village and its guests crackled with laughter in an explosion of relief and delight as the fireworks shrieked and streaked and whistled into outer space. There are many kinds of magic in Bué.