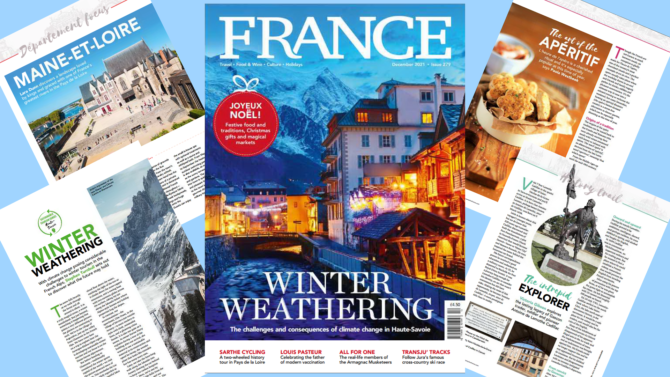 Take a peek inside the latest issue of FRANCE Magazine. If you love France, you won’t want to miss it!

The Christmas season is rapidly approaching and we hope our new issue brings a burst of festive French cheer. If you’re heading to France at the end of the year, don’t miss our round-up of Christmas markets in the capital and beyond. And if you want to bring a little bit of France to a friend or family member this Christmas, our gift guide has your name on it.

As usual, our roving writers have shared their latest French adventures with us, including a cycling odyssey in Pays de la Loire, cross-country skiing in the Jura and a trip to the vineyards of Gascony. What’s more, our sustainable tourism series continues in the Alps, where we head to France’s largest glacier, the Mer de Glace.

Here’s some more of what you can expect…

Five Men on a Bike in Pays de la Loire

“When we left La Ferté-Bernard, we were five men on a bike. By the end of our journey a few days later, only one of us would still be breathing. Of course, technically, four of us were made of plastic, but why quibble? Raided from my sons’ old toy collection and now mounted on the crossbar of my touring bike were my four polymer cycling companions-in-arms: a mace-wielding figurine that would serve as Henry II of England, his power-hungry son Prince Richard the Lionheart, the equally ambitious King Philip Augustus of France, and Robin Hood because…well, just because. With the midday sun of Sarthe beating down upon our merry crew, it was time to set off on a medieval race to the death.”

Find out what else Todd Mauer gets up to in the December 2021 issue of FRANCE Magazine UK.

In the tracks of Le Transju’ ski race in Jura

“If you spend any time at a ski resort in Jura, you’ll notice a preponderance of a certain type of skier. Tall, long-limbed and impressively athletic, these superior beings are not to be found on the usual Alpine slopes, but whizzing around the wide variety of cross-country tracks found close to the foot of the ski lifts.

Jura is a paradise for the sport, being blessed with high-altitude plateaus of undulating hills and pine forests. Once the snow starts falling, you could be forgiven for thinking that you’re in Norway. That’s the perfect terrain for cross country – or Nordic skiing as it’s also known – and it’s why the region is home to one of the most famous races of all: La Transjurassienne.

The race is the biggest event of its type in France, and the only one that features on the Worldloppet list of cross-country ski marathons. The main event is 70km long, and starts at the Combe du Lac in the village of Lamoura and finishes at Mouthe, crossing through the town of Les Rousses on the way.”

Discover the joys of Nordic skiing in the French mountains with Lebby Eyres in the December issue of FRANCE Magazine UK.

“I don’t know about you, dear reader, but I’m one of those people who are either very superstitious or just plain patient, because I never open birthday presents before my birthday.

And this habit of mine is why I’m out of step with a large proportion of Parisians in December: I can’t celebrate Christmas like the French do, on Christmas Eve. It’s not Christmas yet, so why celebrate? You don’t start saying ‘Happy New Year’ before midnight on the 31st, do you?

Lots of French people I know have their big get-together on Christmas Eve. I have nothing against a Christmas Eve party, but I prefer to have my presents and the official Christmas dinner next day. I’ve always wondered how French parents sell the traditional Santa myth to their children – maybe they say, ’He knows we celebrate a day early so he visits France before everywhere else.’ (Thinking about it, Santa’s a generous type, so I’m sure he’s open to compromise.)”

Like what you see? The December  2021 issue of FRANCE Magazine is on sale from 27 October. Take advantage of our great subscription offers and get FRANCE Magazine delivered straight to your door every month! You can also buy single issues from Mags Direct. Happy reading!