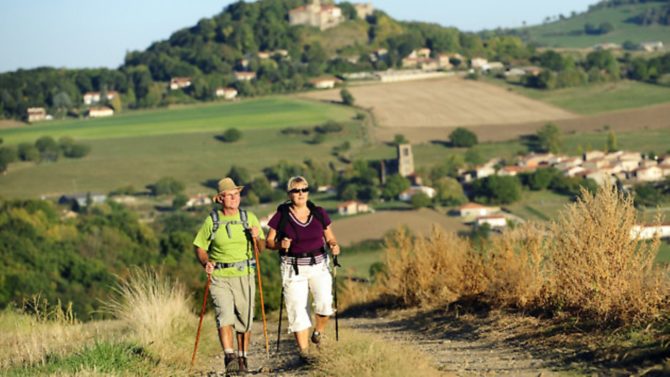 Carolyn Reynier explores Brioude in Auvergne, the historic gateway to the Allier gorges and the Livradois-Forez regional nature park

Auvergne is a geologist’s delight. An ancient crystalline platform of granite, gneiss and mica-schist covers a large part of the region. Large volcanic ensembles appeared 60 million years ago and the last recorded eruptions occurred several thousand years ago. The remains of an immense mountain chain which rose higher than the Alps have now been totally altered by erosion.

Today this ancient area is brimming with life, says the president of Auvergne Nouveau Monde. “Auvergne is a new world, a world to rediscover, open and united, with a sense of engagement, respect for its environment and an intense creative capacity,” says Philippe Laurent. “The region has many unrecognised strong points; we must make them known and put an end to the old clichés.”

One of these ‘strong points’ is the sous-préfecture Brioude, situated in the north-west of the Haute-Loire department, gateway to the Haute-Loire and the stunning Allier gorges.

In common with most French departments, its creation dates back to the period of the French Revolution, its name and boundaries being fixed by Assembly decrees in 1790.

Then, as in the present day, the Haute-Loire’s geographical position – all ups and downs but at high altitude – gives the department a complex and contrasting middle mountain climate.

Oceanic and continental influences, alternating with mountain and Mediterranean ones, provide a wide range of weather conditions, from the heat of the Brivadois plains to the icy blizzards (la burle) which paralyse the plateaux.

The highest average temperature in the department (10.6°C) is around Brioude, and although strong Mediterranean winds bring sudden and heavy rain to the mountainous areas in the south-east, the southern wind remains a moderate one providing hot and very dry periods, especially in the summer months and during the autumn.

With around 2,000 hours of sunshine per year, Haute-Loire is also part of the sunniest third of the country.

Near the border with Puy-de-Dôme to the north and Cantal to the west, Brioude sits on the banks of the Allier, a tributary of the Loire, some 430m above sea level. It is on the south-western edge of the Parc Naturel Régional du Livradois-Forez, one of France’s largest regional nature parks, offering some 320,000 hectares of open space and rural heritage.

The charming town of Brioude grew up around the Romanesque basilica of St Julien. From the 5th century, it was a renowned pilgrimage centre and by medieval times it had become a prosperous and powerful town. Today it is a relaxed place with more of a southerly feel than some Auvergne towns.

Information plates, displayed around the historical centre, outline the main historical sites and events. Brioude is also famous for its lace; you can visit the museum and workshop in the Hôtel de la Dentelle.

The only modern industry is represented by a network of small and medium-sized businesses, most of which are located in Brioude itself. Most shops in the commune are in the town too, which is also home to schools, a crèche, hospital and banks.

Agriculture plays an important part in the local economy with just over half the territory given over to cereal and milk production – fans of pastoral landscapes of hills and dales will love this area. The local gastronomy is also an attraction, with tasty cheeses such as le Velay and Chabrirou, dishes based on green lentils from the departmental capital Le Puy, Fin Gras beef from Mézenc, veal from the Monts du Velay, Velay black lamb, Haute-Loire pork, les Perles Rouges (red fruit) of the Monts du Velay and Vellavia beer.

The town makes a great base for outdoor pursuits in the surrounding countryside. There are many well-marked walking and cycling routes, as well as horse-riding trails, while in winter there’s snowshoeing, cross-country skiing and dog sleighing. The river is popular for kayaking and fishing (especially wild salmon), and also provides some lovely unspoilt beaches for relaxing and swimming.

If you don’t fancy white-water rafting, a great way to see the Allier gorges is to take the Haut Allier tourist train. Winding its way between Langeac and Langogne, following the meanders of the river and contours of the rock faces, it offers unrivalled views of the gorges.

Just to the south of Brioude, perched upon a rocky spur, stands Vieille-Brioude, a former winemaking centre, with a spectacular bridge across the Allier river.

Nearby, the village of Lavaudieu, today a popular film location, grew up around the monastery for Benedictine female monks, moniales, built by Robert de Turlande, founder of the Abbey of La Chaise-Dieu to the east. Known as la vallée de Dieu (the valley of God) in the local patois, it is classified as one of the Plus Beaux Villages de France, as is Blesle with its beautiful buildings nestling between the Bellan and Voireuse rivers just south-west of the eponymous gorges.

The villages are home to some fine examples of dovecotes, wine huts, bread ovens, fountains and mills, all reminders of the area’s agricultural past.

While the town has an undoubtedly fascinating history, it doesn’t spend all its time looking backwards. Jean-Marc Hospital is in charge of ‘urbanism’ at Brioude’s mairie. He tells me that the commune is keen to open up sectors for development, releasing land for housing estates and offering plots to local people to build homes on the outskirts of the town.

In the historic town centre, the commune has been carrying out work for several years to develop the area by improving access roads to facilitate the refurbishment of old buildings.

“Our aim is to make the centre-ville attractive so that these areas and buildings can continue to welcome people,” says Hospital.

The town centre is popular with older inhabitants who want to be within walking distance of shops, services, and healthcare, as well as with young couples starting out who rent. When a private buyer can’t be found for buildings in poor condition, the commune buys them up for eventual resale. Given Brioude’s urban renovation policy, there may well be interesting investment possibilities here.

Estate agent Gérard Audenis, the third generation at Agence Porte Audenis, spoke to me about the fact that although economic conditions make sellers and buyers wary, prices are remaining stable.

“In la France profonde like our region, prices are at a correct and reasonable level,” he says. “And if you require a bank loan you can borrow money at really excellent rates.”

In the old centre, most properties are terraced townhouses on two or three levels and rarely come with a garden. Audenis recently sold one in good condition and on two levels with no garden or garage for what seems an extremely reasonable €65,000. However, another similar property but with a small enclosed courtyard went for €85,000. What a difference a bit of outside space makes!

Other old buildings have been converted into apartments, providing rental income for potential investors. For those who’d like to live in the town rather than simply invest here, Audenis recently sold an entirely refurbished 130m² “très bel appartement” in an old building for €165,000.

As with any historic town, many of the buildings are listed and you cannot touch the building façades in the historic centre without permission from the Bâtiments de France.

On the outskirts of town, there are housing estates where you would expect to pay from €120,000 to €170,000 for detached houses with 700m² of garden, depending on the condition of the house and the quality of its fixtures and fittings.

Once out in the countryside you have all the small communes and villages around Brioude. “We’re about 8km from the A75 Paris-Montpellier motorway,” explains Audenis. “A lot of people live in our little towns but work in the larger centres like Clermont-Ferrand which is only 40 minutes by car.”

Conversely this proximity to the A75/E11 also makes the Brivadois a popular destination for second homes for the Clermontois who live in city apartments and buy a little house with un bout de jardin for the weekends. There are never any jams on this motorway; the traffic is always fluid, claims Audenis.

Country properties are in general 10-15% lower than Brioude prices. A house – not too old and in a reasonable condition – will cost around €150,000 as opposed to €170,000 in Brioude. If you are looking for something old you can find lovely farmhouses in good condition which will cost more, and farm buildings with land which will cost less if they require substantial work. The price range is wide – from €80,000 to €200,000 depending on location, view and state of repair.

Buildings are usually constructed from an attractive locally quarried granite which has an orangey vein running through it. There are some extraordinary buildings where owners have carried out the necessary preservation work. There are others which have been abandoned to a greater or lesser degree. Some of the farms are a little isolated and often come with land and are thus ideal for horse-owning seekers of solitude, says Audenis.

The attractive narrow Allier valley is popular, although here you would need the relevant authorisation to make any changes to building exteriors.

At Lavoûte-Chilhac, south of Brioude, Audenis has just finalised a sale by British sellers who bought the property from him 12 years ago, to more British buyers. UK purchasers, he says, make up 90% of his foreign clientele.

With an average house price of just €125,000, almost €40,000 less than the national average, it’s clear that the Haute-Loire department has a lot to offer.

Previous Article Disneyland at a discount
Next Article Under the hammer