Q&A: Wills in the UK and France 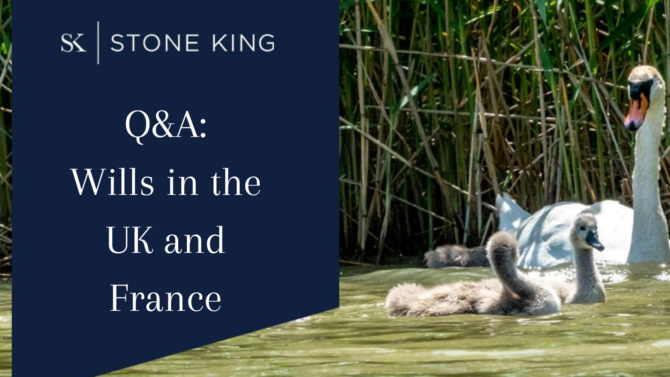 In this article, Bryony Anning of Stone King’s International & Cross-Border Team answers your questions about wills in the UK and France.

1. We are a British couple with assets in England and France. We want to update our wills – leaving everything to the surviving spouse on the first death and then to our children on the second death.

In England and Wales, there is complete testamentary freedom. This means that, save for any legal challenges made against your will, you are free to leave your assets to whomever you wish.

In France, there are rules in place which determine how you can leave your assets. These rules are known as ‘forced heirship’ and they can take precedence over a will. Forced heirship aims to prevent family members, in particular children, from being disinherited.

If you have children, you must* leave you assets as follows –

It may be possible to bypass the forced heirship rules under the EU Succession Regulation. Under the regulation, a person may elect for the laws of their nationality to apply to the devolution of their French assets. This is particularly useful for British nationals owning property in France, who want the laws of England and Wales to apply (testamentary freedom), rather than French law (forced heirship).

We can prepare your wills to include such an election, which means that you will be able to leave your assets in England and France to each other on the first death and then to your children on the second death.

2. I am a British expat living in France. In my will, I want to leave all of my assets to the British Heart Foundation. I have a son, but we have had no contact in over 25 years. Could my estranged son challenge my will?

In England & Wales, it is possible for certain categories of people to make a claim against your estate under the Inheritance (Provision for Family and Dependants) Act 1975, commonly known as ‘the 1975 Act’. Under the 1975 Act, certain categories of people, including children, can make a claim that you have failed to make ‘reasonable financial provision’ for them in the will.

It is unusual for a financially independent adult child to bring a successful claim. You can reduce the chances of a successful claim by including a nominal gift to your son in your will and leaving a confidential expression of wishes, explaining why you have chosen to limit your son’s entitlement under the will.

Importantly in cross-border matters, it is only possible to make a 1975 Act claim in cases where the deceased was domiciled in England and Wales at the time of their death. Although you are living in France, you may still have a common law domicile of England if, for example, you still have substantial ties to England and consider it your true home.

In France, a child who does not inherit in accordance with the forced heirship rules has the option to make a claim against their parent’s estate equal to the amount of their ‘reserved share’. This is a new law which came into force on 1st November 2021 and applies to deaths after this date.

The French lawyer dealing with the estate administration in France will need to contact your son and explain that he has the option to make a claim against your estate. Your son is not obliged to make a claim and can instead agree that the terms of your will should be carried out.

In order to bring such a claim, either the parent or the child must be an EU resident or an EU national. You are resident in France, which means that this law will apply and your son will be contacted about his option to make a claim against your French estate.

It is anticipated that this new law will be challenged at a European level because it is in direct conflict with the EU Succession Regulation (as discussed in Q1). Any challenge and its outcome is likely to take several years to be concluded. In the meantime, people owning assets in France should be aware that their assets may not pass as they had intended.

3. My husband and I have three young children. We currently live in England, but we may move to France in the future. How can we make sure that our children are taken care of in the event of an accident?

We recommend appointing a guardian(s) in your wills, to act in the instance that you and your husband pass away leaving children under the age of 18.

If your children are living in England, your appointed guardian(s) will be legally entitled to care for any of your children under the age of 18. They will have parental responsibility to make important decisions about your children’s lives, including decisions on education, housing, medical treatment etc.

It is possible to appoint more than one guardian, and couples are often appointed as joint guardians. To avoid difficulties, we advise that both parents should appoint the same guardian(s) in their wills.

There are many considerations to bear in mind when choosing guardians. For example, although grandparents can be the most suitable guardians, parents may not want to burden ageing grandparents with ongoing responsibility. You can appoint a guardian subject to conditions. For example, you could appoint someone subject to them reaching a certain age: ‘I appoint my father if at the time of my death he is under the age of 65. If he is over the age of 65… I appoint my brother.’

If your children are living in France, it will be down to a French judge to decide who will care for children. It is advisable to include a guardianship clause in your wills because this will be one of the factors that the judge takes into account when deciding who should care for your children.

In France, the appointed guardian will not only make decisions relating to your children’s education, housing and medical treatment, but they will also be in charge of looking after your children’s property. Property will be held in the name of the children and so if the guardian wants to sell the property, they will need permission from the French court to do so.

4. What are the advantages of having a cross-border solicitor prepare my wills?

Many people are unaware that writing a will is an ‘unregulated activity’. This means that it is possible for a person to set themselves up as a ‘will writer’ with no qualifications, experience or insurance. All practising solicitors in England and Wales are regulated, trained and insured.

There are a number of advantages to having a specialist cross-border solicitor, who is familiar with the laws in England and Wales, France and the EU Succession Regulation, prepare your wills.

At Stone King, we will analyse your circumstances and consider the following issues that could affect the taxation and succession (who gets what when you die) of your estate:

We will make sure that your English and French wills are compatible and do not revoke (cancel) one another – if the revocation clause in your French will is not restricted to France, you may accidentally cancel your English will (and vice versa).

Many of our clients live in France and whilst we enjoy meeting our clients face to face, we understand that this is not always practical and so we frequently take instructions remotely.

If you would like to discuss putting in place wills to cover your assets in the UK and France, please contact Bryony Anning and the International & Cross-Border Team at Stone King LLP – by telephone +44 (0)1225 337599 or email [email protected]ing.co.uk.

* Please note that there are some ways in which forced heirship can be bypassed, such as tontine clauses and matrimonial property regimes but these are beyond the scope of this article.

Previous Article Back to the future: How the Aérotrain almost revolutionised France’s public transport system
Next Article Moving to France? Discover the places where people are happiest