Back to the future: How the Aérotrain almost revolutionised France’s public transport system 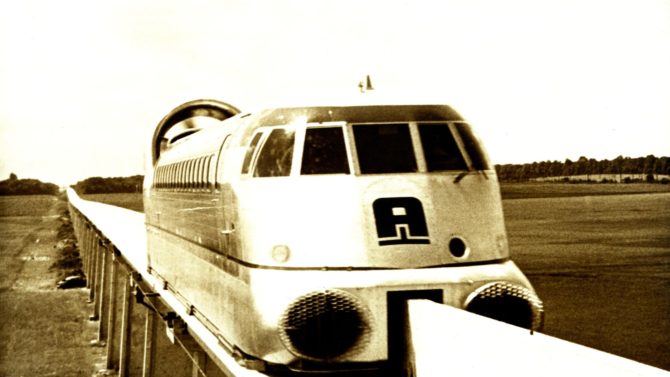 If you’ve ever driven along the D2020, north of Orléans, you’ll have seen it: mile upon mile of concrete suspended above the Loiret countryside. Weathered, graffitied – even demolished in parts – this incongruous landmark is a memorial to an abandoned dream.

Had it come to fruition, France’s cities could have been connected by the Aérotrain – a high-speed hovertrain travelling on an air cushion atop a concrete track. Instead, the country put its faith in the high-speed TGV network, derailing its futuristic rival. Its test track is a sullied reminder of this remarkable engineering project.

Where did the idea for the Aérotrain come from?

It may sound like the product of Jules Verne’s fantastical imagination, but the Aérotrain was actually the dream of an inventor from rural Burgundy. It came at a time when France’s railway network faced stiff competition from the boom in road and air travel during the 1960s. A high-speed train could transform the country’s fate – but to succeed, it would need spadefuls of money and ambition to match.

Step forward Jean Bertin – a Yonne-born engineer with a penchant for inventions. His background was in aircraft engineering; he’d studied at Toulouse’s aeronautics institute and worked for engine manufacturer Snecma (now Safran) after graduating in 1944.

After a decade of honing his craft there, he founded his own company, Bertin & Cie, in 1956. The firm would go on to file 3,000 patents in 20 years, according to his New York Times obituary. One of these patents, filed in summer 1962, would mark, as Bertin said, ‘the birth of the Aérotrain’.

Yet its conception was years in the making. Back in 1957, one of Bertin’s employees, Louis Duthion, was working on an aircraft engine when he noted the phenomenon of ground effect – how compressed air under a low-flying plane provided greater lift. The company realised this technology could be used to carry other large vehicles, but didn’t progress to the Aérotrain until the beginning of the next decade, in 1962.

To demonstrate their futuristic idea, Bertrand & Cie created a small-scale model – just 1.5m long, and 25cm wide – as well as a 20m track. The track was unusual in its design; imagine an upside-down T made out of concrete. The Aérotrain had no need for wheels and the track’s shape would create the ultimate air cushion.

The Aérotrain would fall at the first hurdle without funding, so the firm first approached the RATP, Paris’ public transport operator, in 1963. After being turned down, they next approached SNCF, who were seeking to build a high-speed connection between Paris and Lyon. Alas, SNCF were also unwilling to collaborate, but Bertin didn’t want to abandon his revolutionary idea. He reached out to the newly created DATAR group (Interministerial Delegation of Land Planning and Regional Attractiveness), founded by the Pompidou government. They liked the idea and in 1965, they gave Bertin’s Société d’étude de l’Aérotrain two million francs to boost the project.

This was an incredible achievement for Bertin and his team, meaning they could finally get the project off the ground. Their first prototype, Aérotrain 01, was born – a half-scale model with a 260-horsepower aeroplane motor. A test track was built in Paris’ southern suburbs and by early 1966, the model was reaching speeds of 200km/h. A more streamlined prototype was built in 1967 and two years later, it reached 422km/h on the 6.7km-long test track. It was time for the project to scale up.

Permission was granted for the Loiret test track in 1967 and it opened for use in September 1969. Stretching for 18km between Saran, a town just north of Orléans, and the village of Ruan, it cut a strange shape amid the agricultural landscape. If the project had succeeded, it could have connected Orléans with Paris in 25 minutes (today, it’s around an hour’s journey).

The rise and fall of the Aérotrain

The blossoming technology attracted delegations across the world hoping to implement an Aérotrain system in their own countries, including an American firm called Rohr Industries. There were rumblings of problems – the biggest was the noisy gas turbines which caused tremendous rumblings inside and outside the carriages, meaning the trains would have to run at reduced speeds in urban areas. But the train continued to beat speed records for air-cushioned vehicles, so all seemed to be going well.

In 1971, the Aérotrain’s first public calling came – a project was launched to connect the Defense business district with the new town of Cergy-Pontoise. In June 1974, a contract was officially signed, cementing the project’s success – or so everyone thought.

The previous month, Valéry Giscard d’Estaing had become the next French president. He sought to expand the country’s rail power and would soon fund the TGV. First, however, to Bertin’s dismay, he cancelled the Aérotrain project in July 1974.

Bertin tragically died of a brain tumour the following year, aged just 58, and with him went the project. As plaudits grew for the TGV, it seemed the Aérotrain was relegated to the graveyard of unsuccessful inventions. In the last few years, however, a company called Spacetrain (space-train.fr) has announced plans to revive the project in Saran, where the old test track is located. Launched in 2017, Spacetrain would use the air cushion technology of its predecessors, with trains at speeds of 500km/h powered by hydrogen fuel cells. Perhaps Bertin’s life’s work will be back on track and the Loiret test track will resume service once more. For now, its hardy concrete frame serves as a stoic reminder of France’s technological ambition.