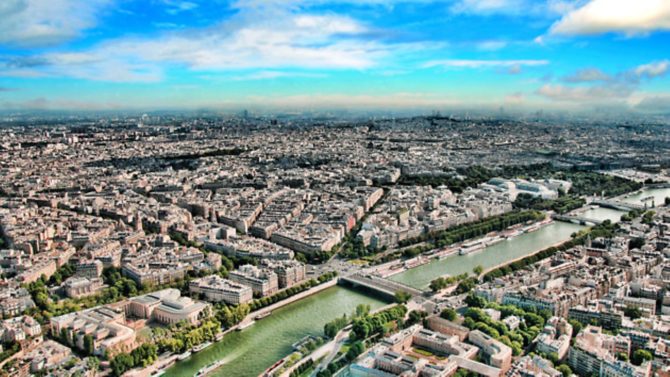 It will come as little surprise that Paris saw the biggest increase in apartment prices over the last 10 years. As the French capital, Paris is an economic powerhouse and easily within reach of London and the rest of Europe. For many the Parisian life of bohemian cafes, designer shops and fine dining is a dream. The city is obviously popular with tourists with the Eiffel Tower and the Louvre are among the most visited attractions in the world. With 20 arrondissements, each with their own character and charm there is plenty to choose from for property buyers.

The city of Bordeaux has proved the best place to invest in property over the last decade outside of Paris, and as one of the must-visit destinations of 2017, it seems likely that property prices will continue to rise. Capital of the Nouvelle Aquitaine region, Bordeaux offers year-round sunshine and a new train line means it is only 2 hours from Paris. The grand 18th-century architecture of Bordeaux led to it being named an UNESCO World Heritage Site and the boulevards, squares and grand public buildings are impressive to see. The dock area along the River Garonne has been newly refurbished and a museum dedicated to wine – the Cité du Vin – cements the town’s reputation as France’s wine capital.

Capital of the Auvergne-Rhône-Alpes region, Lyon has proved a good investment for property buyers over the last 10 years. Lyon is one of France’s most beautiful cities with plenty of activities and attractions, especially the old town which is an UNESCO World Heritage Site. Known as France’s gastronomic capital, Lyon has plenty of restaurants and cafes to try and a busy social calendar with a number of festivals, including the Fête des Lumières. The Alps are within easy reach too if you fancy a day skiing or hiking the slopes.

The city of Lille is only an hour from Paris and 2 hours from London via the Eurostar so it is perhaps unsurprising that property in the city has proven a good investment. Lille has strong industrial roots but is now a classy and self-confident commercial and cultural hub. There are 3 renowned art galleries, stylish shopping, fine dining, a vibrant night-life and a historic centre with La Grand Palace and the Vieille Bourse – 24 identical 17th-century houses surrounding a large inner courtyard.

One of the biggest and best-known cities on the French Riviera, Nice has proved a good investment for property buyers over the last decade. In the summer the town is packed with tourists and so offers a good opportunity to make your property pay by renting it to holidaymakers. The sun continues to shine during the winter and there are a number of winter carnivals to keep you busy. The seafront is full of restaurants serving seafood and Provencal specialities and the Cours Saleya market is a great place to pick up supplies. Nice is a great base to explore the rest of the Riviera and the hilltop Provencal villages of this part of France.

Only 2 hours from Paris by train and capital of the European Union, Strasbourg has been a good investment for property buyers over the last 10 years. In the Alsace area of north-eastern France, Strasbourg is very different to other French cities and has a distinct architecture and culture. The city is home to the European Parliament, Palace of Human Rights and Council of Europe. The prettiest part of the city is undoubtedly the historic Petit France area with its colourful half-timbered houses and don’t miss the iconic Christmas market.

Nantes is a city not many people have heard of but it is the sixth largest city in France and ideally situated in the Loire Valley. Nantes has a dynamic culture with an interesting history. There are the elegant 18th and 19th century districts and the Tour de Bretagne alongside the fantastical Machines de l’Île where you will find a giant mechanical elephant, a flying eagle and a three-tier underwater carousel.

Montpellier is the former capital of the Languedoc-Roussillon region and the third largest city on the Mediterranean coast. It is home to one of the oldest universities in the world, the Université de Montpellier, and so has a large student population making student lets a good income option here. The Place de la Comédie is a beehive of activity day and night, with cafes, restaurants and vibrant street entertainment. The elegant hotels particuliers are magnificent urban mansions created for aristocrats in the 17th century and a dream home for many.

10 insider tips for househunting in France

Toulouse is one of France’s biggest cities, capital of the Occitanie region and home to Airbus which is one of the biggest employers in the area. Toulouse boasts an abundance of beautiful buildings built by wealthy merchants in its old quarter, known as the ville rose. The Pyrenees mountains are within easy reach of the city for those who fancy skiing or hiking. Toulouse is known for its food and has numerous markets and restaurants serving specialities such as cassoulet and Toulouse sausage.

Rennes is the vibrant capital of Brittany with a large student population. The city has a stately-looking centre and a fine medieval quarter and comes to life in the evening as the students visit the restaurants and bars. Despite a fire in 1720 which burnt down much of the old town there are still more than 250 half-timbered houses and sculpted stone facades. Rennes has a great Saturday morning market and an array of quirky boutiques and shops.

*all property prices are averages, increases are from 2006 to 2016 and come from the Notaires de France

Previous Article Where to buy a bargain ski property in France
Next Article Win! A copy of the pocket-sized guidebook, How to Read Paris