Where to buy a bargain French property by the sea 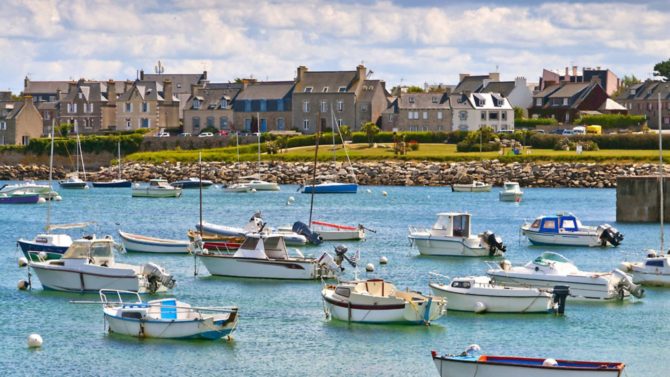 Looking for a property in France by the sea but can’t afford the million-pound villas on the Côte d’Azur? We’ve discovered 11 coastal towns and villages in France where you can buy a property for less than €200,000

If your perfect home is a short stroll from the beach then France, with more than 2,000 miles of varied coastline, is a good place to buy. The most well-known coastal area in France is the Côte d’Azur, however, with average property prices in the major Riviera resorts ranging from €473,000 in Nice to €2,620,000 in Saint-Tropez, this is a distant dream for most of us. Luckily there are plenty of less well-known coastal towns and villages in France where the average property price is less than €200,000. Most of these cheaper coastal resorts are found in the cooler north of France however, we have managed to find a few in the south and even some along the Mediterranean…

Just 30 minutes from Calais, Boulogne-sur-Mer is an historic town on the Opal Coast in northern France. There is plenty to explore in the town including the 13th century belfry which is an UNESCO World Heritage Site, the fortifications which enclose the town and the 19th-century Basilica Notre-Dame. If you have kids to entertain then try the Nausicaa Sea Life centre or head down to the pretty beach or busy fisherman’s port.

The pretty seaside port of Fécamp is located along the stunning Alabaster Coast, not far from Étretat. The town was a favourite with the Dukes of Normandy and there was a Benedictine abbey established here. Nowadays the town is known for the production of the herbal liqueur Bénédictine, supposedly an ancient monk’s recipe, and you can take a tour of the magnificent Palais Bénédictine factory and taste the liqueur. Also explore the picturesque harbour and the stunning coast.

Le Havre is a unique coastal town that has been named a UNESCO World Heritage Site for its bold architecture. Almost completely destroyed during the Second World War, Le Havre was rebuilt by Belgian architect Auguste Perret in a striking modernist style. There is a pebble beach lined with beach huts and overlooked by luxury villas and a marina full of yachts. Head up to the Jardins Suspendus in a fort above the town for a spectacular view of Le Havre.

The coastal town of Saint-Brieuc is the capital of Côtes-d’Armor and is an historic town with plenty of shops, restaurants and crêperies. A great way to explore the coast is the Sentier des Douaniers path (the GR34) or just head down to the beach. In the town itself you’ll find plenty of medieval half-timbered buildings and 1930s mosaic facades. The Bay of Saint-Brieuc is a nature reserve home to 112 species of birds.

16 traditional villages in France you have to visit

The pretty port of Roscoff is classed as one of Brittany’s Petites Cités de Caractère and is easy to get to from the UK by ferry from Plymouth, Cork and Rosslare. The charming town is home to restaurants, crêperies, art galleries and shops as well as the 16th-century Notre-Dame de Croatz Batz. From Roscoff you can explore the Brittany coastline, spend the day on the beaches or take a boat to the Île de Batz and discover the exotic gardens there.

Found at the end of the Crozon peninsula in Finistère, Camaret-sur-Mer is a traditional fishing village with a bustling port and several beaches. Guarding the port is a 17th-century defensive tower designed by Vauban and listed as an UNESCO World Heritage Site. There are several sandy beaches and plenty of rugged coastline to explore as well as a collection of prehistoric menhirs (standing stones) a short drive from Camaret.

L’Aiguillon-sur-Mer is a charming village on the edge of the Marais Poitevin and not far from La Rochelle and the Île-de-Ré. More than 20% of France’s mussels are produced from the mussel farms in the bay and, as you’d expect, there are plenty of delicious seafood restaurants in the town. There are two man-made lakes where you can swim and sail.

The coastal town of Vendays-Montalivet is in a great location along the Côte d’Argent, just 80km from Bordeaux and 65km from the Bassin d’Arcachon. There are 12km of beaches, 6,000 hectares of forest and plenty of hiking and cycling routes, all of which attract a number of holidaymakers in the summer.

The coastal resort of Leucate is on the Mediterranean coast between Narbonne and Perpignan. It is a lively town with a busy marina and eight beaches which are popular with kite surfers, windsurfers and paddle boarders. Leucate is at the foot of the Corbières mountains and in the regional natural park or Narbonne in the Mediterranean meaning there is plenty to discover further inland as well.

Further along the coast from Leucate is the town of Gruissan. The village is built in a circle around the 13th-century castle while along the beach there are rows of colourful houses built on stilts. The beach is popular with windsurfers and there are two marinas and two blue lagoons to explore.

Just 10km from Béziers is the Mediterranean seaside resort of Valras-Plage. A former fishing village at the mouth of the River Orb, Valras-Plage is popular with holidaymakers in the summer. It has a large sandy beach with plenty of restaurants and shops and a children’s adventure park in the summer. There is also a harbour, traditional market hall and beautiful 19th-century villas.