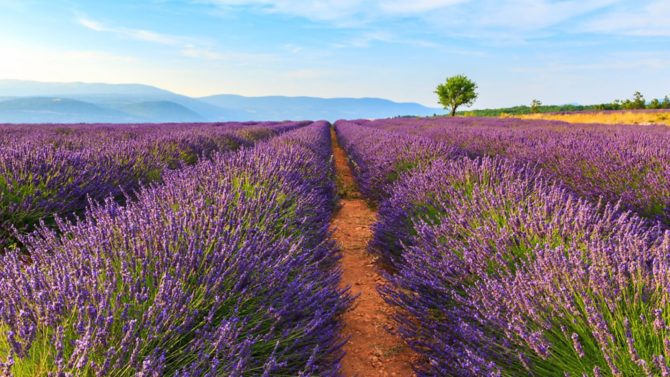 From June to August sun-drenched fields of lavender are a feature of Provence. Find out how lavender was first introduced to the region and became such an important part of the landscape

The tomb of the pharaoh Tutankhamun was fragrant with it, and Mary Magdalene is said to have used it to anoint the feet of Jesus, but even if its origins are far-flung, many of us would agree with the author Jean Giono that, “Lavender is the soul of Provence”.

Has there always been lavender in Provence?

The deliciously perfumed plant was brought to France around 600 BC by traders from the Îles d’Hyères, which were then a Greek outpost in the Mediterranean, near modern-day Toulon. However, it was the Romans – enthusiastic bathers – who first learnt to extract the plant’s essential oil and who named the plant lavender, from the Latin lavare, ‘to wash’.

21 traditional village in Provence you should stroll though

When did lavender’s medicinal qualities begin to be recognised?

By the 14th century, chemists in Burgundy were cultivating lavender as a medicinal herb, and this plant renowned for its soothing and calming effects was soon the go-to cure for everything from headaches to snake bites. Lavender was considered such a powerful protection against disease that Renaissance glove-makers, who were licensed to perfume their wares with lavender, swore that it warded off cholera and plague. Charles VI, also known as le Bien-Aimé and, rather less flatteringly, le Fou, insisted on having cushions stuffed with lavender wherever he went.

How is lavender harvested?

With the creation of the first perfume factories in Grasse – starting with Galimard in 1747 – the demand for lavender grew rapidly and soon entire farming families derived their income from harvesting ‘L’or bleu’ de Provence. Before the plants were cultivated, lavender was cut in the wild and the hard work of harvesting was generally seen as ‘women’s work’. From June to August, harvesters carrying a canvas shoulder bag called asaquette walked from village to village, starting in the lower regions where the purple plant flowers earlier, and then moving into the mountainous area of Drôme and Alpes-de-Haute-Provence, reaping bunches of lavender with their practised sickles.

During the 1930s and 1940s, as demand for the healing qualities of lavender oil increased, distillers would travel from market to market with their copper stills and carry out the process for farmers who could not afford a still of their own.

By the 1950s, farmers were cultivating the plant, often using lavandin, a less expensive, man-made hybrid. The livestock did their bit by eating the weeds between the plants and providing a natural fertiliser. In the following decade, the first mechanical harvesters appeared in Provence, to the relief of the labourers.

Hotels in Provence for all budgets

How is lavender used today?

The region remains one of the world’s largest lavender producers, and the essential oil and flowers are used to make beauty products and perfumed items.

It is, perhaps, that sensual combination of aroma, nostalgia and flavour that makes lavender so intrinsically French.

In the early 1900s, French chemist René Maurice Gattefosse burnt himself while working in his laboratory. Desperate to soothe the pain, he put lavender oil on the burn, which healed faster, and without leaving a scar. More recently, scientists have begun testing the efficacy of lavender for treating cancer and have had success in reducing tumours in mice by using the essential oil.

How can I find out more about lavender in Provence?

Learn about the history and cultivation of lavender at the Musée de la Lavande in Coustellet, in the Luberon regional park, and then stock up on soap, lotions and sweet-scented goodies.

You will also find lavender-themed exhibits in Grasse at Fragonard’s Musée du Parfum and at the Musée International de la Parfumerie, which traces the history of perfumery and its evolution in Provence.

The six Routes de la Lavande cover five departments and include 70 places to visit, including the Plateau de Valensole, the famous market at Sault and the gardens of Sénanque Abbey near Gordes.

The history of Breton stripes

How many of these French experiences have you had?