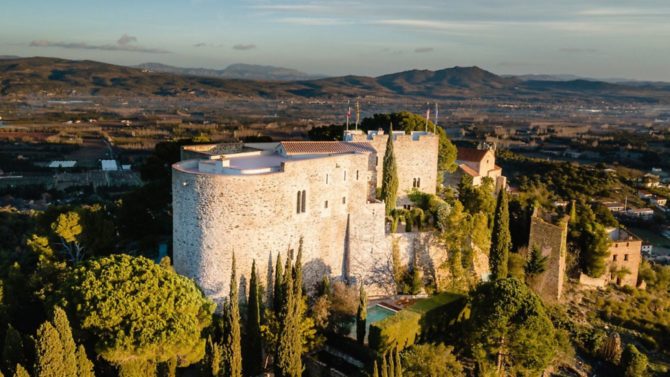 Take a look inside this hilltop castle in sunny Pyrenées-Orientales, on the market for €3.2m.

What a difference a millennium makes. Once upon a time, the prominent hilltop position of Château de Corbère made it an excellent look-out point for invading armies. Now the panoramic views of the Mediterranean, Pyrénées and French Catalan countryside can be enjoyed for beauty’s sake alone.

Once upon a time…

Once the château hosted members of the highest nobility, including the Aragon royal family, but nowadays it is more likely to host a village lunch or a regional chess tournament.

Once the three dungeons were dark and unloved places where food was stored or prioners were kept. Now they are beautiful entertaining spaces comprising a cinema-lecture theatre, pool-changing area, summer kitchen and ballroom with glass floor, fibre optic lights and Bose surround sound.

Who knows what the next chapter in the story will be as the château is on the market for €3.2m. Might it become a boutique hotel? A conference centre? A splendid private home? Only time will tell.

Though the vendors, a New York couple, wish to remain anonymous, they are happy to share their story, which began in the mid 1990s with a trip to France and the dream of starting a new life.

“Wanting to make a family home in France, with land enough to create a special garden, we knew we needed sunshine,” they said. “So on a rainy grey Sunday in Paris, we telephoned the Metéo, which gives the weather forecast and asked a surprised scientist what part of the country is the sunniest. Then we flew to Perpignan in Pyrenées-Orientales, Occitanie, to go househunting.

“In our case, a fairytale life, living in a castle, began by accident. Getting lost in a rainstorm, we drove up a steep hill, in our rented untrustworthy car and there was Corbère, waiting to change our lives.”

What they had stumbled on, in the hills west of Perpignan, 30 minute from the beach and 60 minutes from the ski slopes, was the breathtaking Château de Corbère. Dating in parts back to the 11th century, it is set in more than 25 acres of land and offers more than 650m2 of living space resplendent with the features you would expect of a medieval stronghold, including Romanesque arched windows, leaded glass, wrought iron gates and heraldic carving.

Today the property has eight bedrooms and eight bathrooms (two suites could form a self-contained apartment). For entertaining, there are four rooms (including a cathedral-ceilinged dining room) plus the three donjons as well as two studies, four terraces and the courtyard.

This is not your average draughty castle. In-floor electric heating keeps the building warm and the thick stone walls maintain a pleasant temperature in summer.

For security, there are internal motion detectors and external video surveillance cameras connected to a 24-hour service.

There is more entertaining space outside around the jade-coloured heated pool bordered by lemon trees. The gardens are exquisite with in-ground sprinkers, a cascading fountain and an Italian sunken garden, while miles of safe paths lead into the foothills scented with pine, mimosa and olive. Just by the gate is a chapel, at the disposal of the château but maintained by the prosperous local village of Corbère, which has a butcher, grocer, post office, bus, school and seasonal restaurant.

The current owners have made efforts to make friends in the community, not only by rescuing the château from many years of neglect but by attending and hosting village events and sponsoring a baseball team uniting villagers from Corbère and its ancient rival community Corbère-les-Cabanes.

“We offered the middle dungeon to the regional chess tournament and it was filled by children with time clocks and their parents. The ancient hooks in the ceiling provided a grim joke that if you lost you might be strung up,” laughed the owners.

“Whenever we were at home, we went to village meetings, and dances in the town hall. Of course everyone knew when that was, because they could see the flags flying from our topmost roof. American, French, Catalan, and 11th-century heraldic flags flew from the four corners. Also each night, the massive walls were illuminated and could be seen for miles. As outsiders and Americans we had returned to the French, a piece of their heritage.”