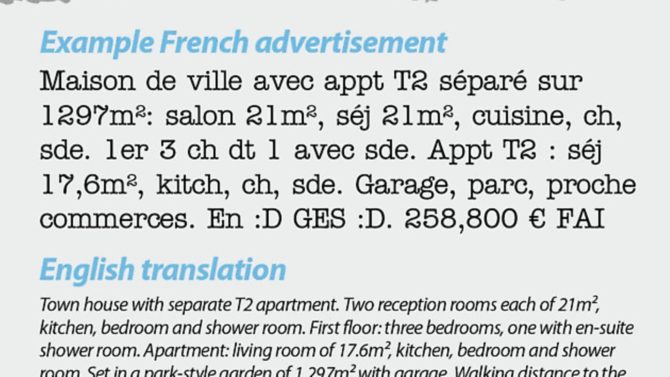 Property advertisements in France differ significantly from those in the UK – and do you know about the bon de visite?

One of the most noticeable differences between agents in France and the UK is their advertising descriptions. As well as often being considerably less detailed, French descriptions also use a specific terminology to categorise the number of rooms a property contains and thus its overall size – and it’s worth getting to grips with this before beginning your househunt. The terminology is most commonly used for apartments but can also be applied to houses. If you see ‘T1’, ‘T2’ and ‘T3’ in an advertisement, it equates to the following:

The number represents the number of main rooms – this includes sitting rooms, dining rooms and bedrooms, but kitchens and bathrooms are separate. For example, a property composed of a sitting room, one bedroom, a kitchen and a bathroom will be considered a T2. Furthermore, French advertisements often omit information that UK ones include as standard. “They can sometimes be frustratingly vague for British buyers, especially if they are travelling some distance to view a property,” says Peter Elias of Allez Français. “In the example on the left, for instance, there is no mention of the heating or drainage system, and the energy reports only provide the band of the energy class – to be legal they should state the exact rating, such as D229 or D22. There is also no mention of the condition of the property.” To avoid wasting time viewing a property that is unsuitable, don’t be afraid to ask your agent to clarify anything you don’t understand, or to provide additional details that may be missing from the advertisement.

Unlike in the UK, where the majority of properties are marketed on a sole agency basis, many properties across the Channel will be marketed by several agents simultaneously – sometimes at varying prices – and may also be advertised privately by the vendor. This can be confusing.

Buyers may try to avoid paying agency fees by contacting the owner of a property direct after visiting it with an agent.

For this reason, it’s commonplace for agencies in France to ask clients to sign a bon de visite, a form which states that the client ‘visited’ the property with that particular agent and which also commits them to using that agent to purchase that particular property, should they eventually decide to do so.

Such a document does not exist in the UK and first-time buyers in France may be taken aback at being asked to sign a formal form in French, but it’s simply a way for agents to protect their fees and avoid being cut out of the deal. Many agents’ sale mandats do also protect them from the other end, by legally prohibiting the vendor from selling his property direct to a client who they have introduced.

“The bon de visite should provide the addresses of the properties visited and their asking price,” explains Edward Landau of Le Bonheur. “It should then state that the client acknowledges that they have been introduced to the property through the agent in question and that they are not permitted to deal directly with the seller.”

It is for this reason that agents in France are also more reluctant to divulge the exact addresses or locations of properties for sale, whereas in the UK this information is more readily available.

Found this helpful? Read about 5 things you need to know before buying a French property

See inside: A £47,000 renovated French cottage with a barn