Reasons to buy a property in the Pyrénées 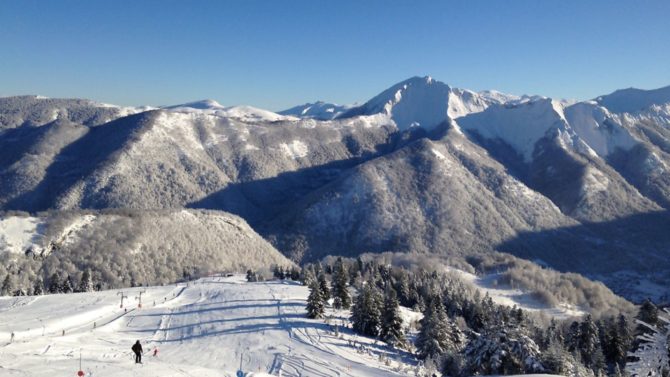 Unspoiled, beautiful and with more affordable property than the Alps, the Pyrénées mountains are an interesting location to own a house in France

The ski resorts are quieter

Most of the resorts in the Pyrénées are smaller than those in the Alps or Rockies but often link up with neighbouring towns to give extensive ski areas, while retaining a quieter, friendlier feel. This is skiing on a gentle scale, where the views and the overall experience of being in the mountains matter as much as the length of runs and extent of the resort. There is, however, still plenty of challenging skiing for all levels and massive investment over recent years has resulted in fast and efficient lift systems and a great choice of runs for all abilities.

But they get more snow

The Pyrénées receive more snow than the Alps, albeit with slightly milder winters and, because the French resorts are on the north side of the range, the snow is much more reliable than in the Spanish resorts on the southern side. The largest and most snow-sure resorts in the Pyrénées are concentrated in the middle of the range in a relatively small area in Haute-Garonne and Ariège, away from the wetter and milder Atlantic coast and the sunnier Mediterranean.

Most of the Pyrenean resorts have snow canons, so snow is guaranteed during the season but the best of the natural snowfall is from early New Year onwards, usually lasting through to the end of March. And even in the most popular Pyrenean ski stations, the pistes and lift queues are relatively quiet, except in the school holidays. In addition, many of the ski resorts nestled in the mountains here were thermal spa towns before expanding into skiing which means there is excellent holiday infrastructure and a year-round tourist trade with as many activities on offer in summer as in winter.

How to decide where to buy a ski property

Reasons to buy a French property in the mountains

The area boasts cheaper properties than the Alps

For those of us with the dream of owning a ski chalet but who have been priced out of the Alps, the Pyrénées offer the perfect solution with both cheaper property and a much better value holiday alternative with weekly ski passes and ski hire much cheaper as well as accommodation and meals. And although ‘cheap’ is rarely a word associated with ski property, there are still plenty of well-located and excellent value ski properties available in this region to buyers of all budgets, particularly for those people seeking bolt-holes that they can use themselves, rent out easily most of the year and hopefully reap some eventual capital gain.

Both ski apartments and houses with easy access to resorts in the Pyrénées are priced far lower than those in the Alps but also offer excellent rental potential and more opportunity for year-round use with a better climate than the Alps for summer and autumn activities. France is still Europe’s most popular ski destination for property buyers, attracting a third of the market but while the millionaires head to their super-chalets in Megève and Courchevel, some canny investors are picking up bargains in the lesser-known and far better value resorts of the Pyrénées.

Hardly surprising when you see the truly eye-watering prices of property in the French Alps; apparently in Courchevel 1850 prices can reach €34,200/m2. In Val d’Isère prices are €28,800/m2 and in Megève €25,700/m2 according to Savills prime ski property report. And the trend is upwards. Here in the Pyrénées on the other hand, you can buy a ski property in or close to many top resorts for between €1,700 and €2,800/m2.

The rental potential is interesting

Rental potential is high here as the area is a popular holiday destination in both the winter and summer thanks to its ski resorts, thermal spa, fantastic walking and cycling, stunning scenery and easy access to Toulouse and Pau. A one-bedroom apartment in the middle of Luchon would currently cost you around €100,000 to €120,000 and could rent out for around €250-400 per week for most of the year.

Where to buy a bargain ski property in France

Here is just a small selection of the ski resorts in the Pyrénées offering good value ski property, excellent rental opportunities and easy access to Toulouse.

Particularly popular with clients in the last few years has been the area around and close to Superbagnères (the ski resort attached to Bagnères-de-Luchon) where prices per m2 are around €2,600, or a bit higher for property right in the town. With its shops, cafés, tapas bars, hotels, golf course, tennis courts, chocolate shops, market and spa, Luchon is one of those towns that exudes ‘old money’ and is very stylish but still very affordable. Superbagnères is one of the highest resorts in the Pyrénées and forms a natural, sunny balcony, with spectacular views over the Pyrenean range. The resort was built during France’s Belle Époque, when the crowned heads of Europe went from seaside palaces to spa to ski resort and the architecture is suitably grand, dominated by the famous Grand Hotel. The ski area encompasses 28 ski slopes, 138 snow canons, 4km of cross country tracks and a sledging slope. It is only eight minutes from the centre of Luchon to the slopes via the télécabine in the centre of the town. After the skiing there is plenty of nightlife, including a cinema, bars, nightclub and a casino making this the premier resort for wealthy Toulousains escaping for the weekend.

Peyragudes: for all levels of skiing and boarding

If this is not enough variety, just a 20-minute drive from Luchon is the even larger resort of Peyragudes. Although many British skiers will be unfamiliar with the ski area, some may recognise it as the setting for the opening of the James Bond film Tomorrow Never Dies. The 50km of pistes from 2,400m down to 1,600m straddle the Col de Flamme and are accessed by an efficient lift network. Intermediates and families are well catered for with wide principally red and blue runs while the open nature of the terrain means that off-piste opportunities abound and skiers and boarders can make the most of the snowpark. The showpiece of this resort is the Vallée Blanche, a 6km red run that descends down a hidden valley and through tree-lined farmland. The 1,000m vertical, wide variety of terrain and feeling of remoteness make this one of the most enjoyable runs in the French Pyrénées. Peyragudes also offers cross-country skiing, snowshoe treks and husky rides to make the most of its abundant snow cover.

Further to the east, in Ariège, a smaller resort, very popular with families, is Guzet, a charming ski resort in imposing surroundings with a variety of terrain for all abilities. Just 140km from Toulouse, it is popular as a weekend getaway from the city. Guzet is a purpose-built ski resort, first developed in 1959 but unusually for a modern French ski development it is known for being one of the prettiest places to ski in the Pyrénées. This is mainly thanks to planning restrictions within the national park here, which insist that the architecture must be designed to blend in with the surrounding landscape. Subsequently the majority of the buildings are small, one- or two-bedroom wooden chalets, rather like beach huts in appearance but which nonetheless have a certain charm and character. The resort is situated at the heart of a pine forest which means that many of the 31 pistes wind through the trees. With 40km of runs, there is a wide enough range of skiing here for Guzet to have earned the reputation as the family resort of the Pyrénées. Many clients looking for family homes in Ariège ask to be within an hour’s drive of Guzet to make the most of the winter and summer sports opportunities it offers.

Further east still is another collection of ski resorts, huddling along the valley from Toulouse to Andorra. Just 125km from Toulouse, the largest of these is Ax-Les-Thermes, the third biggest ski area in the Pyrénées and the last major town before Andorra and Spain. It is made up of three linking but separate resorts, together providing 75 km of skiing from 1,400m up to 2,400m. Cross-country skiers should head to the Plateau de Beille, the largest cross-country ski resort in the Pyrénées situated on a large, sunny plateau at 1,800-2,000m and with an excellent snow record. La Beille is also very popular with the French for its walking trails and circuits for raquettes (snowshoeing) which is the fastest growing winter sport in France.

Previous Article These are the places you should stay if you like French wine
Next Article Quiz: Where in France should I live?