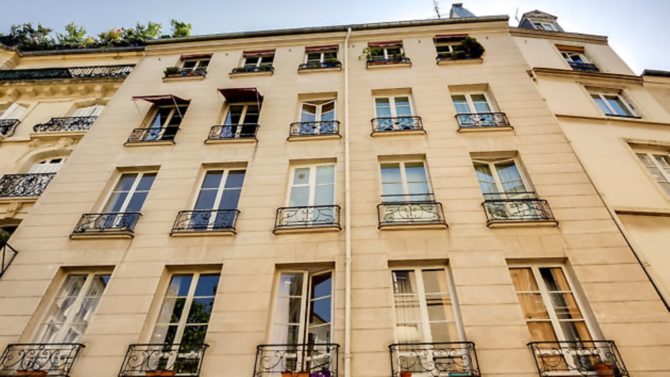 Susie Hollands of VINGT Paris explains why this magnificent 17th-century residence in the Marais, on the market for €2,115,000, gets her seal of approval

Why does this property stand out for you?

It’s romantic and historic – and that’s very fitting with my personality and interests! Stepping into the apartment feels like going back in time to the days of The Three Musketeers. It’s perfectly situated in the buzzy Marais but, set behind vast 17th-century doors, it’s as quiet and peaceful as being in the countryside.

Why is it a great buy?

This is a one-of-a-kind property, situated on the third floor of the building and offering bird’s-eye city views that really give an ‘only in Paris’ vibe. The total floor area is already a generous 160m2 but the natural light flooding in only enhances and increases the feeling of space.

Just entering the property and taking in the space and grandeur of its interiors. Rustic painted beams converge with polished floors and chic modern lighting and the result is very visually appealing. All this is then elevated once you notice the views on offer, which are simply breathtaking.

Who would it suit?

It would be perfect both as a family pied-à-terre – there are four double bedrooms and two bathrooms – and for a discerning fashionista who appreciates luxury and quality and wants the ultimate Parisian pad.

What is your favourite room or feature?

It has to be the main sitting room, which enjoys views of Marais mansions on one side and of the beautiful plant-covered facade of the interior courtyard on the other. You could sit there for hours and just take the city in.

Absolutely perfect. The apartment is just seconds on foot from Place des Vosges, the oldest and arguably finest square in the city, and from the shops of Rue de Rivoli. You’re also close to Bastille’s famous Marché Richard Lenoir, which brings in fine fresh produce twice a week. The 4th arrondissement is jam-packed throughout with cafés, small museums and some of the oldest architecture in Paris.

What’s the appeal of the wider area?

The apartment is walking distance from the Seine, historic Nôtre Dame on Île de la Cité and the trendy eastern district of Paris. Crossing the Pont de Sully takes you straight into St-Germain on the Left Bank.

How easy is it to get to?

Very easy: there is a choice of Métro stations within walking distance including St-Paul, Chemin Vert, Bréguet-Sabin and Sully-Morland. It takes around 12 minutes to get to any of them from Gare du Nord, where the London Eurostar pulls in – so weekend getaways are a piece of cake.