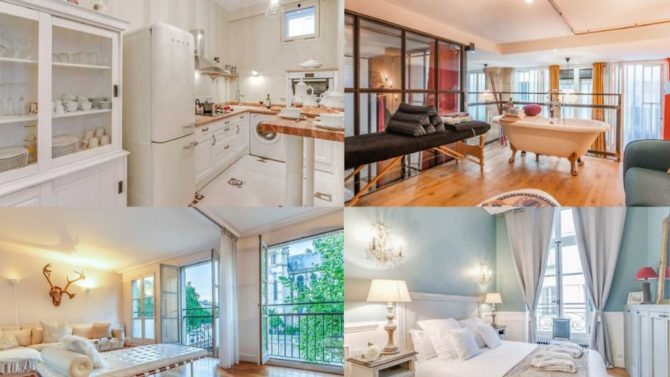 Do you know which neighbourhood in Paris has the most expensive apartment prices? Which is the cheapest arrondissement? Where can you get the most value for money in France’s capital city?

If you’ve been enjoying the luxury apartments on The Parisian Agency, or one day dream of a home of your own in the city of love, you might want to see which arrondissements are more affordable, and see what might be affecting those prices.

The region of Île-de-France has the highest average property price in France, at €7,058/m² and Paris is of course its most expensive department at €10,286/m². However, within Paris the average apartment price can vary by as much as €6,000/m² depending on which arrondissement or neighbourhood you are looking at. Here are the average prices by arrondissement, from the cheapest to the most expensive.

This arrondissement is a good half-hour Metro ride from central Paris, in the North-east corner of the city, and is home to two of its largest parks — Parc des Buttes Chaumont and the popular Parc de la Villette. Considered by some to be a more authentic Paris, it seems that the main downfall of this neighbourhood is just its distance from the touristic centre of Paris.

Super trendy and with some of the best views in Paris from the Parc de Belleville, this arrondissement is home to the Père Lachaise Cemetery where Edith Piaf, Oscar Wilde, Chopin and Jim Morrison are buried. Similar to the 19th arrondissement, its position in the east likely brings its average apartment price down in comparison to the more central districts.

Not quite your traditional cobbled-street Paris, and home to many a high-rise due to regeneration projects, this arrondissement is the modern area of Paris. Street art and China Town live side by side in this neighbourhood, and good schools in the Salpêtrière district attract buyers to the area.

A lovely green residential district, the 12th arrondissement to the southeast is a popular choice for families, specifically Bercy, an old warehouse district with a park and concert arena.

This arrondissement is centered around the charming hilltop of Montmartre, a former artists’ village once loved by Picasso and Dali, and home to the majestic Sacré-Cœur. It has far-reaching views of the city from the steep, winding streets, and the iconic Moulin Rouge cabaret is popular with tourists.

To the south of the city, this ‘bohemian’ neighbourhood comprises a shopping area lined with creperies and historic bistros. There’s also the eerie catacombes that run under the streets of Paris.

A residential district that’s a bit too far out to be of too much interest with tourists, this neighbourhood is flanked to the east by the Seine and is home to the Tour Montparnasse on the north-eastern tip. However, the Grenelle area to the north borders the Champ de Mars where the Eiffel Tower is, so apartment prices vary quite a bit in this district from the North to the South.

Home to the Gare de Nord and the Gare de l’Est, the two largest in the city, making it a great place for travel outside of the city. The Canal Saint-Martin is also very popular for a picnic of an evening.

A popular district with hipsters, this area is lively in the summer, and home to two of the biggest open air markets in the city, Marché Bastille and Marché Popincourt. A great neighbourhood for those that want to see the lively, youthful side of the city.

Crowning the north-east of Paris, this neighbourhood is home to the Arc de Triomphe, but otherwise is mainly a residential distric that is less frequented by tourists than most others, making a great place to buy if you’re looking for a more authentic Parisian experience.

On the rigt bank of the Seine you’ll find this neighbourhood, that’s considered an upscale area of Paris. It was developed during the Belle Epoque era of the early 1900s, and is home to the Palais Garnier and the Galeries Lafayette. Apartments here are more expensive as the area isn’t as popular with tourists but it is still central enough to enjoy the centre of the city.

Full of swanky and pleasant residential neighborhoods like Passy, Auteuil and Trocadero, the 16th arrondissement is home to the Bois de Boulogne which is very popular with families due to its boating lakes and kids’ theme park.

A chic neighbourhood that is defined by the Avenue des Champs Elysées, which links the iconic Arc de Triomphe and the Place de la Concorde, the 8th arrondissement. Compared to other Parisian arrondissements, the 8th is in the middle range when it comes to average apartment prices, partly due to its relatively central position and popularity with tourists.

Just behind the 1st arrondissement, the 2nd arrondissement is home to the former Paris stock exchange as well as the Rue Montorgueil pedestrian neighbourhood.

Incredibly popular with students, this neighbourhood is where Sorbonne university is, and you’ll find many student-filled cafes on the streets of the 5th arrondissement. It’s also known for its bookshops, including the famed Shakespeare & Company. The Panthéon stands proudly in this district, which benefits from being in the heart of the city, thus increasing the average apartment prices.

A busy neighbourhood full of museums, the 3rd arrondissement is great for those that are fans of history, and strolling the streets here you’ll look up to see some lovely balconies above the shops.

Many assume that the 1st arrondissement must be the most expensive both due to its position right in the heart of Paris, and the fact that it boasts the Louvre with the Mona Lisa, the Tuileries, Palais Royal, Les Halles and the designer fashion boutiques along Rue Saint Honoré and Place Vendôme. However, despite the Haussman boulevards that Paris is famed for crossing through the 1st arrondissement, average prices here aren’t the highest, but are still of course €4,000/m² more expensive than the further out neighbourhoods such as 19th and 20th,

Those that might have thought the neighbourhood in which the Eiffel Tower stood would be the most expensive will be surprised to find that when it comes to average apartment prices it is placed second. You’ll also find the Musée d’Orsay and Les Invalides with Napoleon’s tomb in this district.

And the most expensive neighbourhood in Paris is the 6th arrondissement, a privileged area that attracts wealthy foreigners and those working in finance and business. In addition to this, two of Paris’ five most expensive streets are in this neighbourhood: Rue de Furstemberg and Rue de l’Abbaye. Along those streets, interested buyers can expect prices to start around €20,000/m².

Previous Article Moving to France: How to find a good removals firm – and avoid a bad one!
Next Article Reader experience: What is it like travelling to and from France on holiday post-Brexit and under new Covid rules?