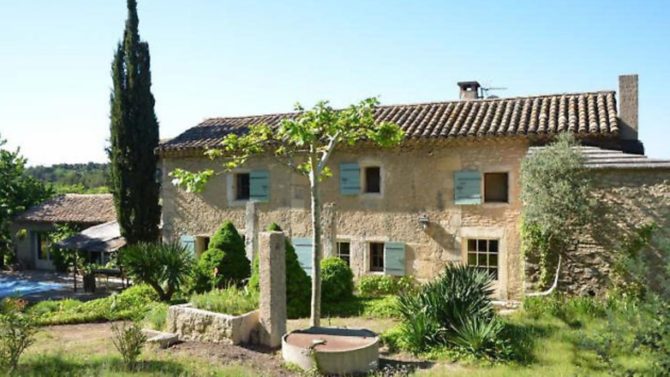 Does anything shout French property more than shutters? We love them all, from painted to varnished wood, pale blue to vibrant yellow, and pristine to shabby-chic flaking. They’re also very practical, keeping out bright sunshine and heat when you want to retreat to a cool interior, and blocking out any early morning light for a full eight hours’ sleep. Bliss! Certain colours are associated with particular areas, often blue or green; pastel hues in Provence or on the Ile-de-Ré, vivid variations in the Marais Poitevin. Some communes insist on a particular paint colour, so before you repaint your shutters, why not check with the local mairie, especially if you’ve noticed all your neighbours’ shutters are in matching shades.

The ultimate outbuilding, the pigeonnier is rural France at its most dreamy. In fact towers full stop are romantic – maybe it’s the Rapunzel link? The history of the pigeonnier is both practical and symbolic – they were built to house pigeons, which were used as a source of meat and fertiliser (not so romantic). In many areas, only the seigneur was allowed to keep pigeons, so they were associated with wealth and power – which explains why they are often architecturally ornate. They were sometimes used for doves too, and while pigeons are perhaps not universally admired, doves are definitely associated with love and peace. In recent times, pigeonniers have become much valued as an extension of country homes and many owners have turned them into romantic holiday accommodation. In the south-west many modern homes are designed with a pigeonnier feature integrated into the main house, further proof of their desirability.

Perhaps it’s the intimate nature of a courtyard but there’s just something about them that makes my heart sing. With a table set à deux, sweet-smelling flowers rambling over crumbling stone walls and maybe even a fountain tinkling in the centre, they prove that you don’t need loads of outside space to make the most of the outdoors. In French towns and villages, outside space is fairly limited. People often have a plot outside town for their potager where they can grow vegetables and cut flowers. Courtyards need little upkeep (ideal for a holiday home) but when househunting you’ll soon discover they’re not always as charming as they could be. Let’s say they don’t always make the most of their potential. All it needs though is a few strategically placed pot plants (drought-friendly in hot areas or you might need to install an irrigation system if you’re not there all the time – the creepers tend to take care of themselves if planted into the ground), a pretty wrought-iron table and chairs, a slosh of paint on grey-rendered walls or expose the original stone and add some carefully chosen ornaments, and any courtyard can be turned into a little oasis. Although most are fairly humble, courtyards can be grand too – in châteaux they are often a formal area, with box shrubs and raised beds, flanked by buildings such as an orangerie or stables, while a courtyard in a Mediterranean villa could conceal a luxurious swimming pool and palm trees.

For me these sum up the elegant townhouses to be found right across France, from those that wrap themselves around a building to others hugging a single window frame, and I’m often to be found pointing my camera up towards them. The twirls and loops are so feminine, so seductive, while the very name ‘Juliet balcony’ is romantic, referring to Romeo and Juliet of course. Until medieval times, wrought-iron was used mainly for tools and weapons and over windows and doors to protect against raiders. Gradually though it began to be used for decorative purposes and it can even be seen on such famous French landmarks as Notre-Dame in Paris. It became particularly ornate from the 16th century onwards, appearing most notably on balconies and gates. French wrought-iron isn’t just confined to France; the balconies of New Orleans in the USA are proof. Wrought-iron features can be used to give your home unique character too; why not pick up some cast-off pieces from a salvage yard or brocante and recyle them in your home, perhaps as supports for shelves or as table legs? I simply fixed one piece to a garden wall as a decoration (ideal for growing plants up) and used part of an old fence or balcony as a hand-grip on a staircase wall, fixing it diagonally in line with the steps rather than vertically as it was originally intended.