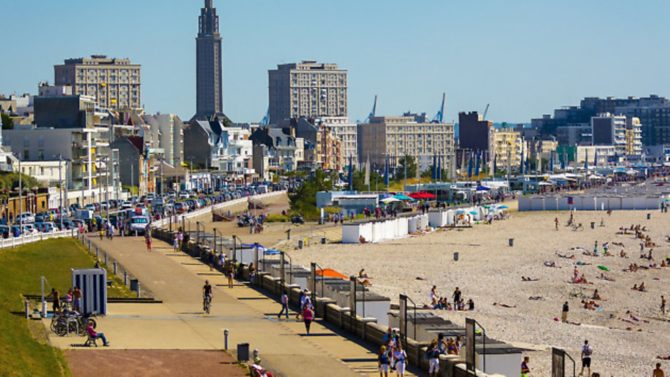 Fancy a short break to France? Take the ferry and explore the pretty, coastal towns and ports of northern France. We’ve picked 8 we think you should definitely explore

Almost completely destroyed during the Second World War and then rebuilt by Belgian architect Auguste Perret, Le Havre is a unique coastal town in Normandy, quite unlike its counterparts along the northern French coast. The town has been an UNESCO World Heritage since 2005 for it bold, modernist post-war reconstruction. Visit the MuMa André Malraux Museum of Modern Art with its vast collection of Impressionist works and the Le Volcan arts centre, as well as the Notre-Dame cathedral, one of the few major historic building to survive the war. There is a marina full of yachts and a pebble beach lined with beach huts and overlooked by luxury villas.

Don’t miss the spectacular view of Le Havre from the Jardins Suspendus, public gardens created in a 19th century fort on the hills above the town.

Where to eat: A Deux Pas d’Ici serves specialities of the area washed down with cider

Where to stay: the Hôtel Vent d’Ouest in the heart of Le Havre where many of the rooms have seaside and seafaring themes.

How to get there: Brittany Ferries operates ferries from Portsmouth to Le Havre.

The pretty port of Honfleur in Normandy will be familiar to many as it has been the subject of many paintings and postcards. The most famous depictions of Honfleur are those by the Impressionsits, especially Eugène Boudin who lived in the town, and you can see many of them in the Eugène Boudin museum. The colourful Vieux Bassin is the heart of the port and many wealthy families built high, narrow timber-frame houses here. The port is now used more for yachts than fishing or commercial boats. You can learn about the town’s maritime past at the Musée de la Marine. For a beautiful view over the Seine and Honfleur, climb to the top of Mont-Joli and visit the 17th-century Notre-Dame-de-Grâce chapel on the way.

Don’t miss the Eugène Boudin museum for a fine collection of Impressionist works of art.

Where to eat: L’Absinthe, one of Honfleur’s gourmet restaurants facing the port

Where to stay: The Hôtel des Loges within walking distance of the town’s main attractions

How to get there: Honfleur is just 30 minutes from Le Havre which has ferries from Portsmouth operated by Brittany Ferries.

Dubbed the Parisian Riviera, Deauville on the Normandy coast has been a fashionable seaside resort since the 1860s, and less than an hour from both Le Havre and Caen ferry ports it is easy to visit from the UK. Deauville has attractive villas, hotels, the grand Casino Barrière and elegant seafront promenade all built in the 19th century. Deauville still attracts the wealthy, especially during its annual American Film Festival held in September which often welcomes Hollywood celebrities to the town.

Don’t miss the Promenade des Planches broadwalk along the beach with wooden beach cabins named after actors and directors who have attended the film festival.

Where to eat: try Le Ciro’s seafood restaurant along the seafront

Where to stay: try the half-timbered Villa Joséphine for a small peaceful hotel with lovely garden and themed rooms

Saint-Malo is another northern French coastal town that was heavily bombed during the Second World War and subsequently rebuilt. However, unlike Le Havre, the rebuilding was focused on preserving Saint-Malo’s historic architecture. Learn about the history of the town at the Musée d’Histoire, housed in the Château de Saint-Malo. Within the ramparts, the old town, known as the ville intra-muros is a maze of cobbled streets dominated by the towering Cathedrale Saint-Vincent. There are sandy beaches to sunbathe on and the Fort National, a formidable offshore fortress that protected the town.

Don’t miss a walk around the ramparts surrounding the old town where you can see the historic houses within and the rocks, forts and sea outside.

Where to eat: Le Bistro de Jean which serves traditional Breton food and definitely try one of the many crêperies for this Breton speciality.

Where to stay: the Hôtel le Nouveau Monde which has a nautical theme and many rooms have balconies overlooking the beach.

The pretty port of Roscoff is classed as one of Brittany’s Petites Cités de Caractère with 16th-century buildings and streets filled with restaurants, crêperies, charming art galleries and shops. Spend the day exploring the town and harbour, including the 16th-century Notre-Dame de Croatz Batz, head to the beaches or explore the coastline. Just out from Roscoff is the Île de Batz with its exotic gardens home to more than 2,000 exotic plants.

Don’t miss the Maison des Johnnies, a museum dedicated to the Onion Johnnies, where you can learn about the Breton men who used to cycle around Britain selling their onions. This is where the caricature of Frenchmen as cycling around wearing berets and strings of onions around their necks came from.

Where to eat: fill up on the Breton speciality of crêpes at the Crêperie de la Poste

Where to stay: Hôtel Chez Janie on the harbour front which was a former meeting place for the Onion Johnnies.

How to get there: Brittany Ferries operates ferries from Plymouth and Cork to Roscoff and Irish Ferries sails from Rosslare to Roscoff.

A pretty seaside town that flourished during the 19th century, Dieppe has attracted a number of famous figures in its time. Oscar Wilde visited the Café des Tribunaux during his exile in France and the Impressionist painters, especially Monet and Pisarro, were inspired by Dieppe and its dramatic limestone cliffs. You can see a range of Impressionist works in the clifftop Château-Musée. Dieppe is still a working fishing port and you can watch the fishing boats set sail and return with their catch before buying the daily catch or trying it in a seafood restaurant.

Don’t miss the Festival des Cerf-volants which happens every two years. Kite-flyers flock to the beach to fly their kites, from small familiar kites to giant works of art.

Where to eat: A La Marmite Dieppoise is the place to go to try Dieppe signature dish, marmite dieppoise, a fish stew with white wine and crème fraîche

Where to stay: try the Hotel Mercure Dieppe la Présidence.

How to get there: DFDS Seaways operate direct ferries from Newhaven to Dieppe.

Boulogne-sur-Mer is a ville d’art et d’histoire on the Opal Coast, just 30 minutes from Calais. The town is full of history, including the 13th-century fortifications which enclose the old town, the 13th-century belfry which is an UNESCO World Heritage and the 19th-century Basilica Notre-Dame, partly inspired by Saint Paul’s cathedral in London. There is a pretty beach and a busy port where you can watch the fishermen at work.

Don’t miss the Nausicaa Sea Life Centre with 36 aquariums housing 1,000 species, sure to be a hit with families and keep children amused all day.

Where to eat: splash out on the Michelin-starred La Matelote or find a restaurant on the Place Godefroy de Bouillon packed with seafood restaurants.

Where to stay: try the four-star Hôtel de la Matelote attached to the Michelin-starred restaurant.

How to get there: Boulogne-sur-Mer is only 30 minutes from Calais with regular ferries from Dover operated by DFDS Seaways and P&O Ferries.

Made famous during the Second World War for the evacuation of Allied soldiers from the beaches by British fishing boats, Dunkirk is easily accessed from the UK via the ferry from Dover. Nowadays it is a bustling port with a range of traditional shops, street markets and miles of sandy beaches and dunes. There are memorials and museums dedicated to war across the area but in Dunkirk, visit the Commonwealth military cemetery which has the Dunkirk British Memorial that honour 4,500 soldiers with no grave. With its proximity to Belgium, the area feels quite different to the rest of France, with strong beer and cheese the local specialities.

Don’t miss the view from the top of The Belfry, the 15th century bell tower home to 50 bells that ring every 15 minutes.

Where to eat: La Moule Rit restaurant known for its mussels www.lamoulerit.com

Where to stay: try the chambres d’hôtes L’Escale Malouine