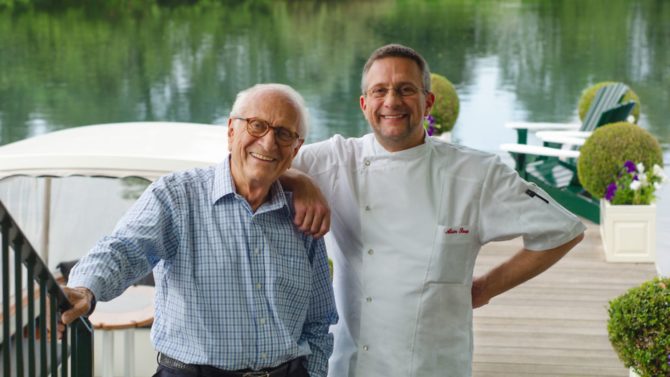 Michel and Alain Roux have unveiled the menu at their new French-inspired riverside brasserie, Roux at Skindles

A chic new French brasserie is set to open this month alongside the River Thames in Berkshire.

Roux at Skindles, by the riverside in Taplow, near Maidenhead Bridge, will open on 6 November. It is French-inspired, though a very different venture of Alain and father, Michel Roux, who own the renowned three star restaurant The Waterside Inn in Bray-on-Thames.

Michel founded the first ever brasserie in London in the early 1970s, Brasserie Benoit’s, before moving on to Bray which has been the home of inspirational French cuisine since 1972.

Their latest offering, Roux at Skindles, is a reincarnation of the notorious, much-loved Skindles Hotel in Maidenhead that blazed a trail of glamour and intrigue throughout the past century, visited by princes, politicians and pop stars. The hotel closed its doors in 1995 and lay derelict for 20 years.

In recent years, Berkeley Group has rejuvenated the entire area and created Taplow Riverside, a new development of luxury houses, apartments and penthouses which are within walking distance of the new restaurant.

There is also an intimate private dining room that seats 14 on the second floor, for private parties and meetings.

Alain Roux says: “People will be able to drop in for a coffee, beer, cocktail or bite as they choose and stay 10 minutes or two hours.

“We are not aiming for another Michelin star restaurant, but we want to focus on quality and value for money.”

Michel Roux adds: “This casual, fresh style of cooking is missing in the area and combined with friendly service will offer something exciting and new. It is the perfect addition to our family without compromising our offering at The Waterside Inn.”

The day-to-day operation of Roux at Skindles will be overseen by Alain Roux. Teams of staff will be led by General Manager, French-born Maxime Walkowiak who worked as Head Sommelier at The Waterside Inn for more than eight years.

Head Chef Raj Holuss is from Mauritius with a background in French cooking who has been Alain’s number two chef at The Waterside Inn for over 10 years.

Featuring local and seasonal ingredients, a classic modern French brasserie menu will be on offer ranging from breakfast through to lunch, with brunch and roast lunches on Sunday, dinner and sharing plates at the bar, salads, sandwiches plus afternoon tea with or without champagne. Breakfasts will include healthy, full English and vegetarian options.