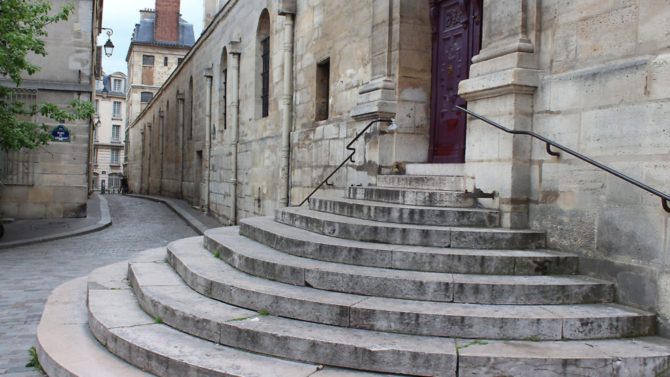 The beauty of the French capital means it is no stranger to the big screen and here are five films to feature its landmarks.

It’s an easy one to start as Woody Allen’s love letter to the City of Light features a wide array of locations in and around Paris. But although some of the famous landmarks are obvious, it’s still worth delving deeper into the lesser known sights shown on screen. The first major twist in the film comes when Gil Pender (a well-cast Owen Wilson) takes a late-night walk and ends up sitting down on some steps after getting hopelessly lost. Those steps that play such a pivotal role in the film are actually located just around from the main entrance of Saint-Étienne du Mont Church, near the Pantheon. Among the other locations included in the film are Sacré Coeur in Montmartre, the Moulin Rouge, Shakespeare and Company bookshop and the film is rounded off with Gil taking a stroll in the rain with the charming Gabrielle, along the beautiful Pont Alexandre III.

There are certainly more famous movies to be set in Paris, but not many people may know that this mind-bending, or should that be head-scratching, Christopher Nolan blockbuster owes one of its most eye-catching scenes to the French capital. Not even many Parisians would be able to tell that it is the Pont de Bir-Hakeim, where Dom Cobb (Leonardo DiCaprio) shows protégé Ariadne how to build her own city in the dream world they are inhabiting. The massive girders and steel framework that run along the bridge are immeasurably strong, but in the film they are moved, opened, closed and mirrored with the lightest of touches. The scene plays an important role in the explanation of the plot of the film which can be challenging to follow. Although not shown in the film, helping keep its location a secret, the bridge offers great views of the Eiffel Tower.

Paris plays a large role in the film adaptation of Dan Brown’s best-selling thriller, which sees Tom Hanks and Audrey Tautou deciphering clues left in Leonardo da Vinci’s masterpieces. The Ritz Hotel, les Jardins des Tuileries and le Louvre are all shown on screen by director Ron Howard. To protect the Louvre, production was carefully controlled, with no equipment allowed inside during opening hours, meaning all filming was conducted at night. Crews were also not allowed to shine light on the Mona Lisa so a replica was used and (spoiler alert) scenes showing blood and writing on the floor were actually shot at Pinewood Studios. Also appearing is Saint-Sulpice church in the Latin Quarter, which dates back to the 12th century. Such was the success of the film, staff took to displaying a note, pointing out that it was a work of fiction, in order to dispel some of the more controversial storylines, including that it once included a pagan temple.

The beloved animated movie follows the story of Remy who one day dreams of becoming a great chef – the only obstacle in his way being that he is a rat. Undeterred, he moved to Paris to follow his dream and hiding under hapless kitchen worker Alfredo Linguini’s toque, creates masterpieces while trying to keep hidden from view. The restaurant in the movie is called Gusteau’s, which is based on La Tour d’Argent – known as one of the most expensive in the city. Pixar is known for creating movies for children its creations always include very emotive and sometimes dark moments and Ratatouille is no different. Another Paris location in the film is Julien Aurouze & Co – a rat exterminator on Rue des Halles. There is no doubt about the nature of its work as stuffed rats hand from traps in the window making it one of the more unusual windows in Paris. In the film, the shopfront is recreated in order to show Remy the danger of getting too close to humans.

The Café des Deux Moulins (two windmills) in the Montmartre area was seen on screen in the romantic comedy Amélie. The outdoor seating, red exterior and old-fashioned charm make it the classic Parisian café and in the movie it is where the star works as a waitress. Audrey Tautou is famous for playing the title role in the film in which she uses her past experiences and dreams of love and beauty to help those around her. The café, located at the junction of Rue Lepic and Rue Cachois takes its name from the two nearby windmills, the Moulin Rouge and the Moulin de la Galette. It has a welcoming, homely environment having not changed a huge amount since the 1950s and is happy to be associated with the popular film, serving on its menu the Goûter de Amélie. Filmed almost exclusively in Paris, there are plenty of other well-known and lesser known city locations to look out for during the film.