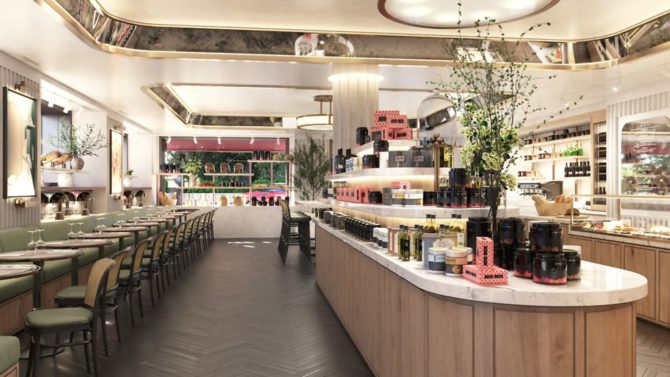 The team behind the late, French ‘chef of the century’ Joël Robuchon are launching two new dining concepts in his honour

A stylish new restaurant, deli and pâtisserie are being launched in London by the team behind Joël Robuchon International.

Le Comptoir Robuchon, in Clarges Street, is due to open at the beginning of November and Le Deli Robuchon, in Piccadilly, later the same month.

Joël Robuchon, who died last year at the age of 73, was the most decorated chef in the history of the Michelin Guide, at one time holding 32 Michelin stars across his restaurants which are located around the world from Paris to New York and Tokyo.

Robuchon pioneered the ‘cuisine moderne’ style of cooking, placing emphasis on a handful of ingredients where flavour was paramount.

At the age of 50 he retired from the kitchen, allowing him the freedom to travel and garner new influences, particularly from Asia. His time in Japan proved to be highly influential on his cooking style and he credited it with a heightened awareness of texture in his dishes.

On his return to Europe he created a new restaurant concept, L’Atelier de Joël Robuchon, inspired by the experience of the sushi counter, which had a site in London’s Covent Garden until April this year.

The menu at Le Comptoir, designed for sharing, will be composed of two parts: La Saison, a selection of contemporary, seasonal dishes using the highest quality produce and Les Eternels, a collection of Robuchon’s beloved classics.

The interior of Le Comptoir has been designed by Thurstan and will feature refined tones of burnt orange and clay, with an elegant marble-top counter where guests can dine or enjoy an aperitif.

Le Deli Robuchon, in Piccadilly, will offer a casual, all-day dining space with eat-in or take-away options and a pâtisserie. There will also be a selection of carefully handpicked products available to buy which have been tried, tested and loved by Joël Robuchon and his team.

The off-site boulangerie will offer freshly baked pastries from banana bread with mascarpone and caramelised almonds, porridge with dry fruits and chia seeds to the traditional handmade croissant. While sandwiches will include JambonBeurre Le Prince de Paris, baguette, ham and Robuchon’s signature butter or Le Croque à la truffe, Saint-Nectaire cheese and truffle. There will also be a selection of salads, afternoon tea and cheese and charcuterie boards.

Late chef set to inspire next generation of stars