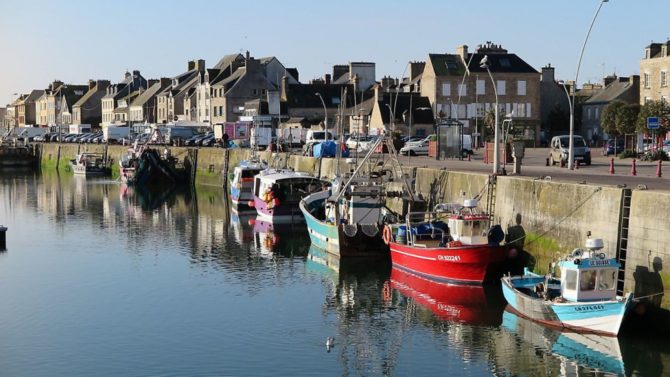 The fishing town of Sainte-Vaast-la-Hougue was voted Le Village Préféré des Français for 2019. Here are a look at some properties in the surrounding area, and why you should consider buying there.

People often view Normandy as rural, rainy, and more of a gateway to the rest of France. Not so – Saint-Vaast-la-Hougue, a little fishing town on the Cherbourg Peninsula in Manche, was voted the French public’s favourite village earlier this year, in an annual televised competition. Despite a population of less than 2,000, Sainte-Vaast-la-Hougue charmed audiences with its narrow streets, pretty harbour, oyster farming heritage and fortified island.

Why you should go there

First of all, Sainte-Vaast and the rest of the Cherbourg pensinsula are incredibly accessible from the UK. The area is served by three ferry ports: Cherbourg (around half an hour from Sainte-Vaast), Caen (an hour and a half from Sainte-Vaast) and St Malo (just under two and a half hours from Sainte-Vaast). Depending on which route you take there are a number of unmissable sights on the way, including Mont Saint-Michel, Bayeux and the D-Day beaches.

Sainte-Vaast itself is a picturesque, bustling little place, with a number of shops and eateries. The town is most famous for two things: oysters and towers. The former are harvested in beds that link the mainland and nearby Tahitou island, and they are celebrated across France for their subtle nutty flavour. As for towers, both the Tour de la Hougue on the mainland and the tower on Tahitou island were built by Sébastien le Prestre de Vauban, the famed architect to Louis XIV. As such, they are listed as a UNESCO World Heritage Site. Tahitou island is reachable by amphibious boat and is well worth a visit in its own right, thanks to the botanical gardens, maritime museum, nature reserve and annual folk music festival that it hosts.

Property in and around Sainte-Vaast-la-Hougue

In general Manche is a great department to consider buying in, either for a holiday home or permanent residence. The area is dotted with pretty and friendly villages, larger towns and cities are easily accessible, as is the UK, and of course there are the beaches. The average house price across the department is €130,000.

Properties in Sainte-Vaaste de la Hougue do command something of a premium, mostly due to the village’s status as one of the most popular tourist destinations on the peninsula. According to MeilleursAgents, properties in the heart of the port cost an average of €2,027 per square metre. However, travel just a couple of minutes to the neighbouring village of La Pernelle and the average drops to €1,252 per m², and 30 minutes inland houses will only set you back €976 per m², so it’s well worth considering buying ever so slightly further afield.

Although the area would make a wonderful place for a holiday or retirement home, you shouldn’t rule it out as somewhere to set up a permanent residence and career. Despite its prestigious status, residents of Sainte-Vaast-la-Hougue say there is a desperate shortage of workers in the town, with shops and restaurants being forced to reduce opening hours due to lack of staff. Perhaps a role as an artisan baker in a seafront boulangerie could be your calling?

This lovely stone farmhouse has three bedrooms, a large garden and a number of outbuildings. It is in beautiful decorative order and has character features throughout, as well as scenic views from the garden. Located within easy reach of the town of Remilly-sur-Lozon, less than an hour from Sainte Vaast.

Around 48 minutes from Sainte Vaste, in the pretty village of Le Plessis-Lastelle, this four-bedroom family home has traditional farmhouse features, a large and well equipped garden, and a gîte which currently achieves a rental income of €7,000 per year.

On the edge of a pleasant village and just 5km from beaches is this attractive three-bedroom house, which benefits from recent modernisation and a stone outbuilding. Sainte-Vaast-la-Hougue is an hour away.

Recently refurbished to a very high standard, this two-bedroom cottage is within easy reach of several market towns and is 45 minutes from Sainte Vaast.

For anyone hoping to set up a business on the Cherbourg Peninsula, this collection of nine chalets is all set up and ready to run. In the village of Montebourg, 20 minutes from Sainte Vaast, the listing offers eight two-bedroom chalets, all with private gardens. Two have balconies with private hot tubs, and one has disabled access. There’s also a larger main building with three bedrooms and two bathrooms.

Head to our website, FrancePropertyShop.com, to browse our full fange of properties in Manche.

Property guide to Creuse: the cheapest department in France