Regional architecture: The suspended houses of Pont-en-Royans and their history 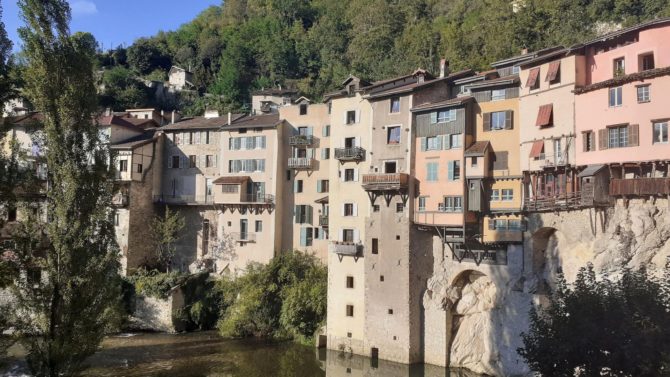 At the western end of the Gorges de la Bourne, the riverside village of Pont-en-Royans on the Isère/Drôme border in the Auvergne-Rhône-Alpes is famous for its colourful gravity-defying houses that overhang the Bourne River. In this Plus Beau Village medieval architecture attracts tourists from across the world to see these ingenious buildings that have stood the test of time.

Built into and suspended from the cliff face, the maisons suspendues were classified as a Historic Monument in 1944.They were constructed in the 16th century when limitations of space on the plateau and a growing timber trade in Vercors called for a design which would maximise space at the foot of the gorge. Over time more and more houses were built surrounding the bridge, and the village of Pont-en-Royans was created.

Stroll along the river past the waterfall and you’ll see the houses perched on the cliff, with balconies and outhouses that overhang the river. No longer in use of course, the toilets are just holes in a plank of wood suspended over the river a good 10 metres above the river…

The houses that cling to the karst limestone cliffs reflect the sunlight on a sunny day and are a nice mix of ochre, yellow and pink. You’ll also find some troglodyte medieval homes built directly into the rock. From Pont-en-Royans you can enjoy the scenic drive towards Villard-de-Lans through the Bourges canyon where the road is carved into tunnels through the mountains. The nearby Grotte de Choranche is full of vast underground caverns that were discovered in 1897, hundreds of years after the construction of the maisons suspendues in Pont-en-Royans.

Do I need a separate French will to cover my property in France and how do I go about it?

Property prices are beginning to fall in notoriously expensive Bordeaux