The vehicle stickers you need to buy before driving in Paris 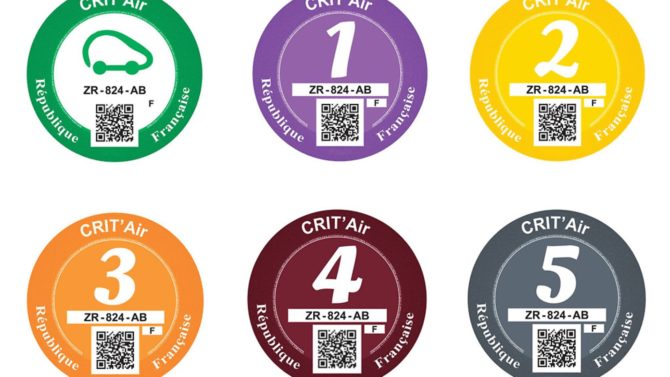 The Crit’Air stickers for all vehicles in France, including foreign vehicles, was first introduced in Paris, Lyon and Grenoble, and has now been adopted by several other French cities – this is all you need to know about whether you need one and, if so, how to buy it so you avoid a hefty fine

Several French cities have introduced ‘clean air’ windscreen stickers in an attempt to reduce pollution and more are expected to adopt the measure in the next few years. All drivers (including foreign drivers) in Paris, Lyon, Grenoble, Strasbourg, Lille, Toulouse and Annecy must now display these Crit’Air stickers on their windscreen or risk a fine of up to €135.

Why have these measures been introduced?

These measures are an attempt to reduce pollution in major French cities and come after several spikes in air pollution levels in Paris since last October, which led to traffic restrictions and free rides on public transport. On days when the cities are at risk of reaching their air pollution limit the authorities can stop certain vehicles entering the city based on the Crit’Air sticker on their windscreen.

The stickers are the idea of Paris mayor Anne Hidalgo and form part of a wider initiative that also includes traffic-free streets – like the newly opened pedestrianised right bank in Paris – and curbs on heavy-goods vehicles.

Who has to have a sticker?

All vehicles entering Paris, Lyon, Grenoble, Strasbourg, Lille, Toulouse and Annecy have to display a Crit’Air sticker, even foreign drivers. The sticker is valid for as long as it is legible but if you buy a new vehicle then you will need to buy a new sticker. The measure is expected to be introduced in up to 25 French cities by 2020 so if you might be driving in a city then it would be wise to order a sticker, they are only €3.11 and could save you a hefty fine…

How do I know what sticker I need?

There are six different stickers, ranging from green for clean electric and hydrogen-powered vehicles to grey for diesel vehicles, the biggest polluters. Furthermore, vehicles registered before 1997, as well as pre-2000 scooters and motorbikes, will be banned from Paris between 8am and 8pm Monday to Friday.

The sticker you have depends on the emissions of your car (Euro 1 to Euro 6). This should be listed in the V9 section of your registration certificate or you can work it out based on when your vehicle was produced using this table. You can then work out which sticker applies to your vehicle on the Crit’Air website

How do I get a sticker?

Once you know which sticker you need you can order it online. From 1 March 2018 the cost of a Crit’Air sticker is being reduced from €3.70 plus postage to €3.11 plus postage. You will have to upload an image or scan of your vehicle registration certificate in jpeg, png or pdf format and not more than 400KB in size.

What happens if I don’t buy one?

Previous Article Welcome to our holiday cottage in the Auvergne
Next Article Properties for sale in France for under €200,000