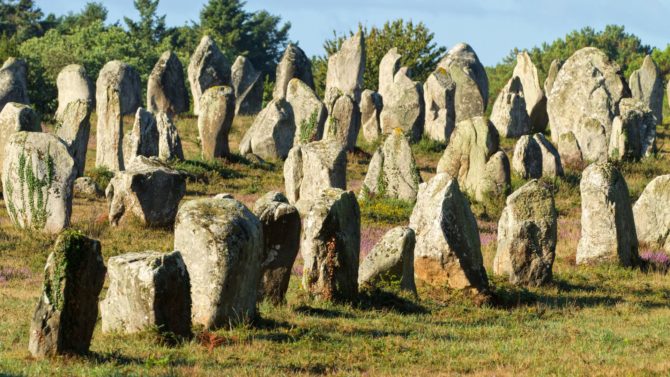 Elaborate earthquake detector? Ancient calendars? A lunar observatory? There have been many theories put forward to explain the purpose of the Carnac Alignments and yet their true purpose has never been discovered. There has also been much debate as to when these mysterious stones first appeared, although most archaeologists and historians tend to agree that they were erected during the Neolithic period which lasted from 4500 BC to 2000 BC. However, an exact date still remains a mystery due to the lack of materials beneath the stones that could be used for radiocarbon dating.
Often referred to as France’s Stonehenge, this collection of more than 3,000 prehistoric standing stones, located around the village of Carnac in the Morbihan département of Brittany, it is in fact much more significant than the famous Wiltshire landmark. The largest megalithic site in Europe and considered to be one of the best-preserved examples, it also predates Stonehenge by around 100 years. Based on her research, Swedish archaeologist Bettina Schluz Paulsson has suggested that Europe’s megalithic monuments originated in north-western France and that the practice of constructing them spread from there.

LINING UP
Spanning four kilometres across and covering an area of 40 hectares, the stones are divided into three main areas where they form long rows that stretch as far as the eye can see. In Ménec to the west, 11 converging rows of 1,050 stones run for more than a kilometre, decreasing in height from the tallest at 4m to just 0.6m. At either end are what Scottish engineer Alexander Thom, famous for his theory of the Megalithic yard and studies of Stonehenge, considered to be the remains of stone circles. The Kermario alignment to the east also extends for more than a kilometre, its 10 rows made up of 1,029 stones, while the shorter Kerlescan alignment culminates in a circle of 39 stones.
Several of the Carnac stones fall within the boundaries of the nearby town of La Trinité-sur-Mer, including the much smaller group known as the Petit-Ménec alignments, along with the dolmens of Kerdeneven and Kermarquer. More dolmens – a type of tomb consisting of two or more standing stones supporting a flat stone top – can be found throughout the area, such as those at Er-Roc’h-Feutet and Kercado. The latter is rare in that it is still covered by its original cairn, and features Megalithic art carved on the inside.

LUCK OF THE DRAW
In 1834 Sir Francis Ronalds, an English scientist and inventor heralded as the ‘father of the electric telegraph’, and his friend Dr Alexander Blair travelled to Brittany to study the Carnac stones. Using Ronalds’ patented perspective tracing instrument, the perspectograph, they were able to produce the first accurate drawings of the stones “with almost photographic accuracy”, which went on to be published in their book, Sketches at Carnac (Brittany) in 1834.
According to local legend, a Roman legion was on the march when the wizard Merlin turned the soldiers into stone, which is why the stones themselves are so straight. Other possible theories to explain the purpose of the Carnac stones have suggested that the site was used as a burial ground, for religious gatherings, and that the stones were connected to astronomy, aligning with the sun and moon on some way and acting as a calendar for farmers so that they would know when to plant and harvest their crops.

2 PLACES TO VISIT
Maison des Mégalithes
The main information point for the Carnac stones, this educational centre explores the history of the megalithic site and offers a bird’s-eye view of the alignments from the rooftop terrace. Guided tours are available and the centre also hosts activities, exhibitions and workshops.

Musée de Préhistoire James Miln – Zacharie Le Rouzic
Fascinated by the renowned megalithic site, Scotsman James Miln de Woodhill moved to Carnac in 1873 and went on to lead excavations at the key locations until his death in 1881. He gifted his discoveries to the town and a museum was opened in his name. Dedicated to the Neolithic period, it traces the development of the megalithic stones and captures everyday life at the time through its collection of more than 6,600 artefacts including maps, plans and archaeological finds.