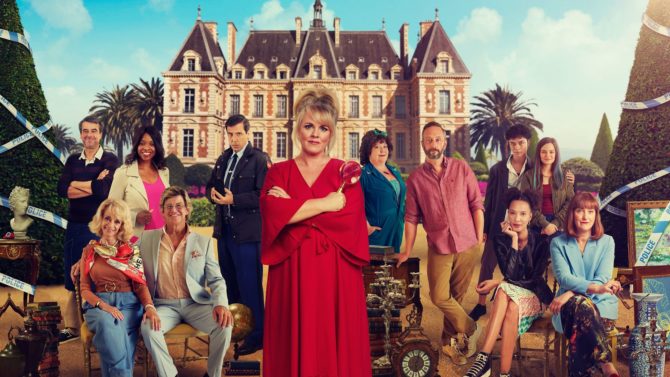 The new six-part series starring Sally Lindsay, who played Shelley Unwin in long-running ITV soap Coronation Street, is shown on Saturday evening at 9pm on Channel 5. Get ready to channel your inner Agatha Christie or Sherlock Holmes and settle in for some weekend escapism.

“I’ve always been fascinated by the worlds of antiques and Agatha Christie, so putting the two together and creating the world of Sainte Victoire has been an absolute joy,” says Lindsay, who explained on The One Show that she came up with the idea in 2019 while sitting in a Manchester car park in the rain.

Lindsay plays Mancunian antiques dealer Jean White, whose husband and business partner Rory is killed in a car accident on the way back from a business trip to France. Not only is she left struggling to come to terms with his death, Jean soon learns that he was living a double life and has left her penniless. The only glimmer of hope is that Rory had kept their cottage in south of France, and when she learns that this is their only remaining asset, she reluctantly relocates to antiques hotspot Sainte Victoire, where she begins to investigate the mysterious circumstances surrounding her husband’s death.

Joined by an eclectic bunch of characters that includes Judith, played by Sue Holderness (Only Fools and Horses) and Dom (Steve Edge from Phoenix Nights), Jean soon discovers that there’s a lot more to Rory’s demise than first meets the eye. Can she solve the case, and get to the bottom of the other antiques-related mysteries that seem to be emerging in the village?

The Madame Blanc Mysteries began on Saturday 16th October at 9pm on Channel 5 and is set to be released on DVD on 13 December 2021.

Previous Article Halloween: 5 French Films that will spook and disturb you
Next Article Allo Allo! Brits in France