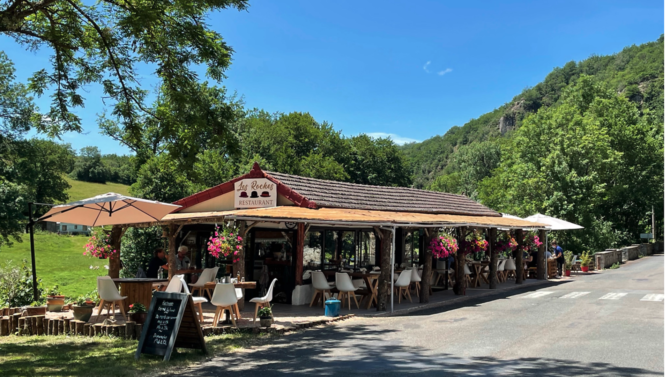 Meet the Brits serving English cuisine to the French, at their restaurant Les Roches in Auvergne. We find out what it’s like starring in Channel 5’s new series, Allo Allo! Brits in France, and how Andy and Richard are faring in their new life in France, including celebrating their own wedding.

What led to you moving to France?

We were on a six-week motorbike tour through Europe and stopped in Auvergne to see Richard’s sister Pam and her husband Mike. They’d owned Les Roches for 12 years but it had become too much work for them so had decided to sell it (they were checking on the building and having a holiday). We fell in love with Les Roches, and that’s when we decided to move to France and start a new chapter in our life. France stole our heart. We moved over there in February 2020.

It had been empty for seven years and needed a full renovation, including the restaurant, kitchen and bedroom which is still ongoing.

Why did you decide to open a restaurant?

I (Andy) had been in catering since I was 16 years old and it seemed the perfect opportunity to start a kitchen of my own. Also, with Richard being in the building trade for many years, it made sense to renovate. We opened on 10th June, and opening night was full-on, with new staff and new systems – it was a bumpy ride but we got through it and at the end of the night, everyone had had a good time and enjoyed the food.

Why serve British food in France?

I have been chefing all over, in the UK, Spain and now France, and am passionate about what I cook. We discussed what type of food we were going to serve and with two French restaurants in the area, decided do something different – why not bring British food to the heart of France! After all, what’s not to love about fish and chips! We also serve BBQ ribs, stuffed mushrooms with the local blue cheese and breaded camembert. We have a mixed clientele, of French, British, Dutch and Belgians. The food has gone down really well with everyone who has been to the restaurant, the locals love it as well. The mayor of St-Eloy has been a few times, and brought his friends.

You opened the restaurant along with your friend Kelly, how did the three of you meet?

Myself and Richard have known each other for many years, we met Kelly through building work. When he heard what we were planning to do, he asked if he could join us. Since then we’ve called ourselves ‘The Power Of 3’ (#thepowerof3) as basically we all work at what we’re good at. Kelly is the paperwork man, he deals with the admin side of things, and speaks French. Richard can turn his hands to anything – he loves to get his hands dirty! He also runs front of house. I run the kitchen with an iron rod, but I like to have a bit of fun at the same time. We also have summer staff and some have been kept on for winter.

It must have been a challenging time to run a hospitality business, how did you cope with Covid lockdowns?

We actually used lockdown to refit and renovate the outside restaurant and patio. We also built a ‘farm’ which now has 11 chickens, six pigs and four ducks – they’re family, not for eating! Richard had to clear the whole area, and our friends gave us a campervan so we stripped it out, cleaned it up and turned it into the chicken’s 5* hotel! The pigs have had a wooden house built for them and now they all live together.

Is the work seasonal?

With this being our first full year, and summer being so full on, we’ve taken a break from the restaurant now to have a holiday and see family. But when we get back, it’ll be back to work as we plan to reopen on 20th November. Bookings are coming in and we have some renovation work still to do.

Do you speak French?

Kelly picked the language up very quickly. Myself and Richard are doing our best but it’s not the easiest of languages; we’re learning through being with our French friends and online.

What do you love most, and least, about living in France?

We love living in the countryside, and all the friends we’ve met along the way. The French people are so friendly and accepting. We’ve fully integrated into the community and have been accepted by all. There’s no downside. Our local area is so peaceful and we have the most beautiful place to live – we wouldn’t change it for the world, we’re not going anywhere, we’re here to stay!

What do you do in your spare time?

Spare time, what’s that?! After lunch service I (Andrew) do admin and get ready for evening service. Richard says he’s just popping out to the shop – on his bike… We like going out to other restaurants, to relax, but we do find ourselves looking at what others are doing.

A little birdie tells us you celebrated your wedding in September?

Yes, it was wonderful to be able to hold our Handfesting ceremony at Les Roches, and to invite friends and family to the place we love to share in our celebration.

Was it fun making the Channel 5 series?

It was really good fun making the TV show but at the same time it was also hard work having a camera in your face while working, sometimes it got too much. We haven’t met any of the other Brits who appeared on the who but we’re in contact with them via Facebook.

Do you miss anything from the UK?
No not really, just family.

Any plans for the future?

When we’ve finished the work on the bedrooms, we’ll be opening the B&B side of our business next year. Over winter we’d also like to introduce quiz nights and a drag show. Who knows what the future will bring, watch this space!

Any tips for other Brits who’d like to move to France and run a restaurant?

Keep watching the series to find out how the guys cope with catering for a huge vintage car rally, and how the ‘power of 3’ turns out. (The Channel 5 series, Allo Allo! Brits in France, follows the lives of characterful Brits who’ve fallen for France and made it their home.)