Look inside the France Calendar 2017 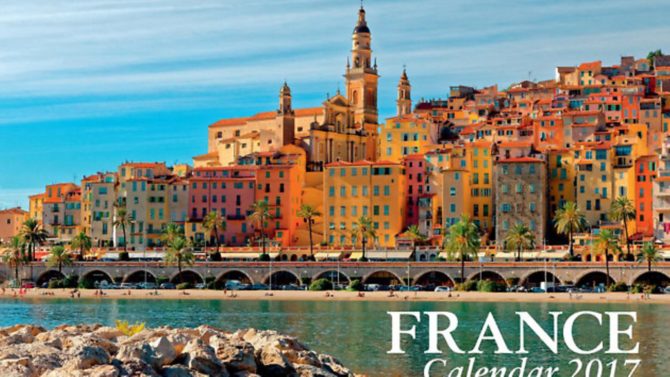 Take a sneak peek inside the France Calendar 2017 brought to you by France Magazine and discover the beautiful images of France we have chosen for you – order your calendar today!

The colourful houses in Menton feature on the cover of the France Calendar 2017. Menton is the last stop on the French Riviera before the Italian border. Menton has a lovely old port, pastel-coloured buildings, shady streets and excellent restaurants. Menton is known for its lemon festival in February when the town is taken over by giant sculptures created from lemons.

The image for January is the 13th-century Château de Najac which dominates the village of Najac in Aveyron. A plus beau village in south-west France, Najac is located on a bend in the river and is full of quaint medieval houses. The château towers over the village and was once a stronghold of the Cathars before becoming a royal château.

Paris is known for its world-famous museums but there are also a number of smaller ones that are definitely worth visiting. One of those is the Musée de la Vie Romantique – the Museum of Romantic Life – in the area once known as New Athens, near Montmartre, which is the February image on the France Calendar 2017. The house was once owned by Dutch artist Ary Scheffer and contains his work as well as works by the writer George Sand.

The opulent Palace of Versailles was created by Louis XIV and is now a UNESCO World Heritage site and one of France’s most visited attractions. After several years the Abundance Salon in the Grand Apartment has been restored to its former glory and makes a stunning March picture for the France Calendar.

The capital of the Alsace wine region, Colmar looks as if it has been taken straight out of a fairytale and is therefore perfect for the April 2017 picture on the France calendar. The image shows the delightful Petite Venise district where visitors marvel at the rows of coloured timber houses, cobblestone lanes and bridge-laced canals.

The Château de Maintenon is located around 65km from Paris and is the May image of the France Calendar 2017. It dates from the 12th century but its most famous resident was Madame de Maintenon, the mistress of Louis XIV and later his secret second wife. The garden was designed by Andre Le Notre (also the designer of the gardens of Versailles) and there is an unfinished aqueduct commissioned by Louis XIV that was to take water to Versailles.

Hidden in central France is one of France’s most beautiful natural sites – the Gorges de l’Ardèche. The July image on the France Calendar 2017 depicts the natural stone bridge, the Pont d’Arc, which marks the entrance to the spectacular 18-mile long gorges.

Straddling the River Rhône in the Vaucluse department, the city of Avignon was the capital of Christendom for several decades and has a legacy of eccleasiatical architecture including the UNESCO World Heritage site the Palais des Papes. Tucked away in the historic centre of Avignon is the plane tree-lined Place Crillon with numerous sun-dappled café terraces which is the perfect image for August on the France Calendar 2017.

France is home to more than 3,400km of incredibly varied coastline, some of the most memorable stretches to be found in Brittany. Between the villages of Plestin-les-Grèves and Louannec in northern Brittany lies the Côte de Granit Rose, where unusual pink-granite rock formations are edged with turquoise-tinged sea and fine sandy beaches. Here you will find Ploumanac’h which is the eye-catching image for September on the France Calendar 2017.

One of the local specialities in Normandy is cider and a great place to learn about it is at the Ecomusée de la Pomme et du Cidre (the Apple and Cider Museum) near Étretat which is the October picture on the France Calendar 2017. The museum is a working farm that produces cider and is also home to a flock of Norman geese.

The Arc de Triomphe is one of the most famous monuments in Paris and it stands at the end of the city’s most famous street – the Champs-Élysées. Commissioned by Napoléon, the Arc honours those in the military who died for France and beneath it lies the Tomb of the Unknown Soldier. A ceremony is held here on Armistice Day and so it is a fitting November image for the France Calendar 2017.

The picture-perfect resort of Val-d’Isère is one of the most popular ski resorts in the French Alps. The pistes cater for all abilities and the après-ski is a real treat. With Christmas markets, festive menus, carol concerts and a vin chaud or two, Val-d’Isère is a great place for a white Christmas and is therefore the December image on the France Calendar 2017.

Collioure is one of the most picturesque resorts in Occitanie and a great alternative to the busy Riviera resorts. Situated on the Mediterranean coast and framed by the Pyrénées mountains, Collioure is home to winding lanes, pretty cottages, brightly painted boats and waterfront restaurants. The picture on the Forward Planner of the France Calendar 2017 will have you longing for summer.

Enjoy these beautiful images every day with the France Calendar 2017. A single calendar costs £11.99, but if you order 4 or more they are only £8.99 each.