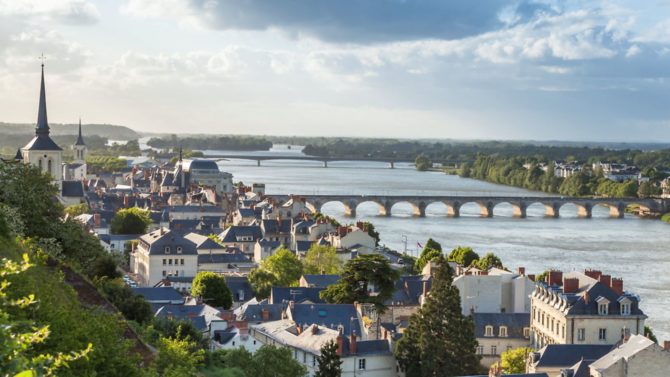 The Loire valley, known as the Garden of France, was of immense strategic importance during the Middle Ages, but the feudal fortresses of warring lords were replaced by charming castles during the Renaissance, when kings came here to escape hot summers in the city. Most of the valley is now a UNESCO World Heritage site, which can be enjoyed over a few days travelling from Saumur to Chambord.

Day one: Saumur to Fontevraud

Prepare to fall in love at first sight with Saumur, topped by its 14th-century castle hewn from limestone. This charming town on the left bank of the River Loire is home to wine cellars, gourmet restaurants and food specialities such as fouace. This bun, stuffed with sweet or savoury fillings, is available at Joseph (Boulevard du Maréchal Juin), a bakery on the outskirts of town which also stocks oven-baked bread.

Hike off those calories by climbing the spiral staircase to the top of the Château de Saumur’s belvedere, a watchtower in the south-west wing that provides sweeping views of the Loire Valley. The castle featured in the illustrations of the Duc de Berry’s Book of Hours and it is well worth browsing the collection of medieval tapestries, as well as the 20th-century works of art, in the museums.

Whether you are an avid horse lover or not, you won’t want to miss a visit to the training grounds of the Cadre Noir. The world-renowned equestrian association, which includes some of France’s most famous horse riders, was created in 1815 as a cavalry school. During the tour, you will visit the stables and see trainers working with the thoroughbred horses.

Wine-loving Gérard Depardieu has vineyards just outside Saumur, at Château de Tigné. It is not possible to visit the Astérix actor’s winery, but you can sample one of his deliciously crisp rosés at the subterranean wine cellars of Bouvet Ladubay, just outside town at Saint-Hilaire-Saint-Florent.

Stop for dinner at… End your day at popular local restaurant L’Escargot in Saumur and order the steaks served with caramelised onions and baked potatoes, followed by home-made ice cream.

Stay the night at… Le Domaine de Mestré. This delightful hotel, a short drive along the D145, is set in renovated farm buildings that once belonged to Fontevraud Abbey.

Fontevraud Abbey is the final resting place of the Plantagenets, including Henry II and Richard I, and you will need several hours to visit the interior, museum and gardens of this beautiful site.

From Fontevraud, follow the pretty little D751, which wiggles its way alongside the River Vienne to Chinon. Stroll through the old town to visit the 11th-century château with its museum, and walls covered in Knights Templar graffiti.

Continue past woodland, vineyards and farmhouse to Azay-le-Rideau. After a stop for lunch, visit the recently renovated château, one of the most famous in the Loire Valley, which sits on an island in the River Indre.

Before leaving town, spend an hour at the Musée Maurice Dufresne. The museum houses a local collector’s assortment of vehicles and objects including a guillotine from the French Revolution, and a glider used in the hit 1966 war comedy La Grande Vadrouille.

Stay the night at… the Château de Beaulieu in Joué-lès-Tours. The hotel, just outside of Tours, is a Relais du Silence, so peace and quiet are guaranteed.

With its half-timbered houses, Roman ruins, Gothic cathedral and narrow streets, Tours is a city where you can wander for hours. Visit the Touraine wine museum, housed in the medieval cellars of the former Saint-Julien Benedictine Abbey. The abbey also houses the Musée du Compagnonnage, which displays the works of historical trades guilds.

After lunch, continue following the D751 along the left bank of the Loire to the UNESCO World Heritage city of Amboise. The Royal Château was a focal point of the Renaissance arts scene during the reign of François I, who invited the artist and inventor Leonardo da Vinci to the court.

The Italian polymath spent the last three years of his life at the Château du Clos Lucé, next door to Amboise castle. Clos Lucé is now a museum that displays models of da Vinci’s various inventions as well as a copy of the Mona Lisa that the artist made during his stay.

After admiring this seminal work, relax at the Mini-Châteaux Parc de Loisirs. This wonderful little theme park has scaled-down models of the Loire castles, as well as traditional fairground rides and a lake with electric boasts that you can drive.

Stop for lunch at… Buy croissants stuffed with ham and cheese, and slabs of tarte Tatin at Aux Delices de Touraine at 97 Rue du Rempart in Tours, and picnic by the river watching bright coloured kingfishers flash by.

Stay the night at… Le Vieux Manoir, an enchanting guesthouse set in an 18th-century mansion, within five mnutes’ walk of Amboise’s gourmet restaurants.

Ways to save money when you’re driving in France

An insider’s guide to the Centre-Val de Loire region

Previous Article Escape to the Château DIY: how we bought and renovated our French château
Next Article Which is your favourite market in France?