Which is your favourite market in France?

First published: 17 May 2018 by Sophie Gardner-Roberts 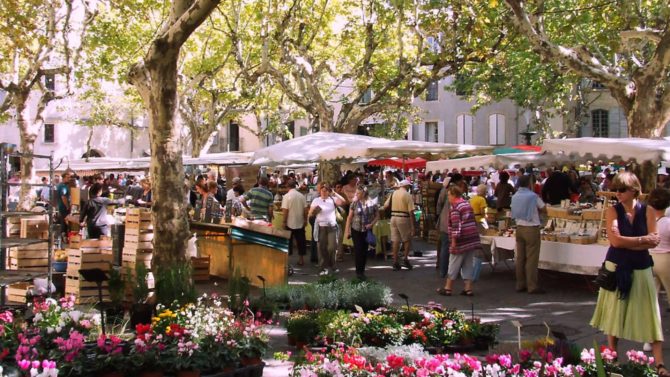 Launched by TF1 news anchor Jean-Pierre Pernaut, Le Plus Beau Marché de France aims to crown France’s best market. The contest is run in partnership with local newspapers who asked their readers to vote for their favourite regional market with the #VotrePlusBeauMarché campaign. This first phase of voting gathered around 400,000 votes and resulted in a shortlist of 25 markets battling to be elected the best market in France.

After several months of voting the winner was announced in early May – the charming market in Sanary-sur-Mer in Var. Read on to find out more about the Sanary-sur-Mer market and the other 24 markets that made the shortlist and let us know your personal favourite.

Twice a week the pretty southern town of Uzès holds a colourful market under the arcades of the elegant Place aux Herbes (pictured above). If the stacks of olives, platters of goat’s cheese and pots of Uzès’ famous honey aren’t enough to tempt you, the busy market is the perfect place to enjoy an atmospheric morning in the south of France.

This typical Provencal market is as charming as can be: old plane trees offer welcome shade in the Provence heat as the hundreds of merchants gather every Wednesday to present their products with passion and care while, along the port, fishermen present the day’s catch.

Spread on place Général de Gaulle, the St-Lô market is the perfect place to get fresh fish and other Normandy specialties. It’s on several days of the week but the biggest and most popular edition is on Saturdays.

The enticing markets of south-west France

Inaugurated in 1865, this beautiful covered market hall is set on the banks of the Lauch river in the heart of Colmar. It is a fine brick and wrought iron building with one angle sporting a little bronze sculpture of a vigneron. It was restored in 2010 and now houses a permanent market, complemented by stalls outside every Thursday. Peruse more than 20 stalls for local products and fresh Bretzels.

The covered Marché des Halles shelters many regional specialties, showcased in the stands held by families for several generations. The market hall was recently restored to its former 19th-century glory enhancing a typical metal-framed roof. You can tuck into homecooked meals in the hall and even listen to live music as concerts are held twice a month.

Every Saturday morning the streets around the mairie and the covered market are teeming with stalls, locals and visitors for the weekly food market. There’s been an important market in Le Puy-en-Velay since the 15th century when farmers would come down from the surrounding mountains and countryside to sell their produce. Today around 450 stalls set up shop every week though this increases in the summer. The star of the market is the ‘Fromage aux artisous’ which uses little mites to nibble on the crust to better age the cheese.

As a gateway into the preserved Morvan regional park in Burgundy, Toucy has a lovely rural and rustic charm which is embodied in its weekly Saturday market. Back in the Middle Ages, Toucy market was the largest in Burgundy and was known for selling grains and livestock. Today, some stallholders sell live chickens, ducks or even rabbits! You’ll find the usual food market suspects though make sure you stop and pick up snails, honey and a Fras de Moutiers savoury tart.

Taking place on Wednesdays and Saturdays, Vannes’ market is a lively and colourful one, set to the backdrop of beautiful colombages houses with their half-timber facades. It offers a large variety of fresh fruit and vegetable stalls plus a great covered fish market.

Located on the picturesque banks of the Loire in Orléans, on the quai du Roi to be precise, this market runs every Saturday morning. Bulging with fresh products from the bountiful countryside, it is a lovely place to simply to take a stroll and soak up the atmosphere by the river.

This market is on every Sunday morning and takes over the winding streets of of Issigeac. Up to 200 stalls set up shop in the shade of the 15th-century church and all over the medieval centre. It attracts thousands of visitors, particularly in the summer, who love to stroll around the market soaking up the south-west’s typical art de vivre.

This historic market was created during the reign of Louis XIII who wanted to attract more people to Versailles. Set at the heart of the old centre and 5 minutes from the grand Château de Versailles, the Marché Notre-Dame was divided into 4 squares which you can still see today: the flour square, the maritime square, the meat square and the herb square. Today, 33 stallholders share the space under the market halls which were built in 1821

Held every day, this lovely market sells the best of Corsican produce from salty cured meats and fresh fish to cheesy migliacci and honey. It takes place in the heart of the Ile Rousse village under an impressive timber roof held up by columns.

More than 200 stallholders take over the pedestrian centre of Dieppe every Saturday morning. The market is connected to the port when visitors can go and pick freshly caught fish.

Boasting cosy old world charm thanks to its metallic columns and huge cathedral-like windows, le Marché des Vosges in Belfort was first open in 1905. It is open every Friday and Saturday and a musician strolls around the hall much to the delight of shoppers who come to sample some of the best local products

Known for its hearty gastronomy and tasty products, Brive-la-Gaillarde naturally holds a bustling market in its centre which, in its peek hours, attracts nearly 20,000 visitors on Saturday! It inspired a song by George Brassens whose name was given to the spacious and recently restored market hall which shelters the stallholders and their produce.

Housed in the covered market since the late 19th century, this market showcases the best of Lorraine gastronomy. Some stallholders have been selling their produce for several generations, such as the aptly named Marchand family, specialised in cheese and poultry. The market is open from Tuesday to Saturday.

What French things do you miss most when you’re not in France?

The biggest market of Guyana, Cayenne’s market is the perfect place to get all your spices, exotic fruit and herbs and fresh fish. It’s held on Place du Coq and in a 19th-century market hall where many people tuck into homemade dishes or browse the crafts and jewellery stalls. With an early start at 04:00, the market takes place Wednesday, Friday and Saturday.

For 700 years now, the market in Cahors sets up shop at the foot of the UNESCO World Heritage site of the St-Etienne cathedral. Around 100 stallholders animate the square with their colourful and tables full of the flavours of this lovely region. The market was listed as a ‘marché d’exception de France’ to reward the diversity of the produce sold here as well as its charming location and atmosphere.

Royan’s impressive Marché Central is housed under a modern hall which was rebuilt after the wall and is now listed as a Monument Historique. Come here every day of the week for fresh fish and sea food, as well as local specialties such as cheese tourteaux or galettes charentaises.

7 of the best brocantes in France

Set in the shadow of the impressive belfry in Arras on three of the town’s largest squares, this twice weekly market has been running since the Middle Ages. Today it attracts visitors in droves, here to browse the 200 or so stalls while they bite into sweet liégeoises waffles…

On the banks of the Erdre river, the marché de Talensac is the only and most popular covered market in Nantes. It is set on the old site of the slaughterhouse and recently celebrated its 80th anniversary. Around 170 merchants come six days a week, including, apparently, the butcher of the équipe de France de la gastronomie.

Taking place every Sunday morning, St-Valéry-sur-Somme’s market boasts a remarkable view of the beautiful Baie de Somme. It focuses largely on gastronomic specialties hailing from Picardie so head there to try gâteau battu (literally ‘beaten cake’, it is a type of brioche), bigalans (a potato and meat-based dish) and ficelles picardes (savoury pancakes stuffed with cheese, mushrooms and ham).

Set in a dreamy location on the banks of a lagoon, just steps from the beach in Saint-Pierre on the Ile de la Réunion, this bustling market sees small producers flock from all parts of the island to sell their sun-gorged produce. Nearly 600 stalls squeeze together to show off craft items as well as local specialties.

Underrated travel experiences in France you have to try

Present since the 13th century, this market soon grew too big for Châtillon-sur-Chalaronne and so a hall was built in the mid 15th century to accommodate everyone. Les Halles with its wooden colums still exist today and the market takes place every Saturday, offering fresh water fish, seasonal vegetables, live poultry and tasty local dishes.

Set on the banks of the River Loire a short walk from the centre, the market in Amboise is the largest of Indre-et-Loire and one of the most popular in the region. It runs twice a week and boasts a sought-after organic produce section. Attracting visitors from all over, it is an ideal place to have a wander.