Best of Bergerac: What to visit and where to eat 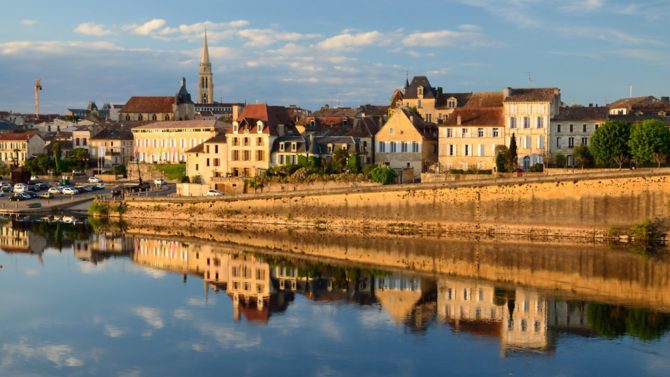 With regular flights, enjoy a weekend in this historic town in Dordogne

The town of Bergerac has been sitting on the banks of the Dordogne river in one form or another since the 10th century and is now an inviting maze of streets lined with honey-coloured, half-timbered buildings capped by russet rooftops.

As a weekend destination, it is hard to beat; the medieval market town is compact enough to explore on foot and if you have longer, there is plenty more to discover in the undulating countryside of the Périgord Pourpre.

If you arrived in time for an apéritif, cross the Vieux Pont, head out of the old town and join the locals for a riverside drink at Le Bistrot d’en Face, with its terrace overlooking the old town of Bergerac and the Dordogne.

You can watch the traditional gabarres sail past as you sip. These boats are an integral part of the area’s history; they carried wine made here up the river and as far as northern Europe, bringing prosperity to Bergerac. Stay here for dinner, or wander back across the bridge and into the old town for dinner in the charming Villa Laetitia.

The morning light sets Bergerac’s streets off perfectly. Don’t forget to look up as you stroll towards Place de la Myrpe and take in the higgledy-piggledy brickwork of the half-timbered buildings with their strangely nautical rooftops. The shape is no coincidence – they were built by the same carpenters who built the hulls of boats.

In the centre of the square stands the statue of Cyrano de Bergerac, Edmond Rostand’s witty character from the eponymous play. Posing with lots of his trademark panache, his famous nose raised to the sky, the statue is one of Bergerac’s most famous permanent residents. But the same cannot be said of the man himself, who never set foot on these streets; Rostand’s play is based on a real person, Savinien de Cyrano de Bergerac. But in spite of his name, he was born in Paris and never made it to the town.

Stop for a café crème then follow your own noses around the town and you will find Bergerac’s outdoor market, which sets out its wares around the pretty church of Notre Dame on Wednesdays and Saturdays. La Table du Marché Couvert, at the nearby covered market, is just the place to satisfy your appetite for local, seasonal produce.

In the afternoon, visit the bijou Musée Costi. In the semi-sunken vaults of the presbytery of Saint Jacques, the museum showcases a collection of delicate figurative bronze sculptures made by Greek artist Constantin Papachristopoulos, better known as Costi. Born in Athens in 1906, Costi moved to Paris to pursue his career and later in life fell in love with the Périgord region. He donated more than 50 statues to the town of Bergerac and they are on display in this soothing space.

The sun is dipping, so perhaps it’s time for another apéritif? The Quai Cyrano is a new centre dedicated to tourism and wine in the Pays de Bergerac. Set in a 17th-century cloister with a terrace offering fabulous views of the Dordogne, the bar will serve you one (or two) of at least 160 different wines, along with cheese, charcuterie and more. But leave space for dinner: take the short walk to L’Imparfait to dine out in style.

It’s worth forgoing the lie-in on Sunday to venture out of town and see some of the surrounding Périgord Pourpre. Issigeac, around 20 minutes’ drive from Bergerac, is a village carved from the palest stone which hosts a thriving Sunday morning market. Stalls selling food and crafts line the ancient streets; shop for souvenirs, or snack on a punnet of fresh berries in one of the Plus Beaux Villages in the region. For lunch, try L’Atelier, serving modern cuisine in a rustic restaurant with ample gardens.

On your way back to Bergerac, stop off at the fairytale Château de Monbazillac. Four tall round turrets rise above acres of vines whose grapes are used to create the dessert wine that shares its name with the château. Grapes are picked at just the right moment, when they begin to shrivel and succumb to a fungus caused by the fog rising in this very special place. That ‘noble rot’ causes the juice in the grapes to concentrate and the result is a sweet white wine that looks like gold and tastes like nectar.

If you have time on your return to Bergerac, head back down to the quayside and take a trip along the Dordogne on one of the gabarres, a gentle way to say au revoir to the town and the river that has long been its lifeblood.

Getting there: Bergerac airport is 10 minutes’ drive away. Trains from Paris take under four hours (change at Bordeaux).

Where to stay: Clos d’Argenson, a charming hotel with plenty of character in the heart of town. Rooms from €115. leclosdargenson.com

Where to eat: L’Imparfait, a favourite with locals; modern cuisine served in a cosy setting. Lunch menus from €26. imparfait.com

French property: Should I buy in Dordogne or Corrèze?

Previous Article The most popular French villages on the internet
Next Article 21 of the best free websites, podcasts and apps to use to improve your French in 2021