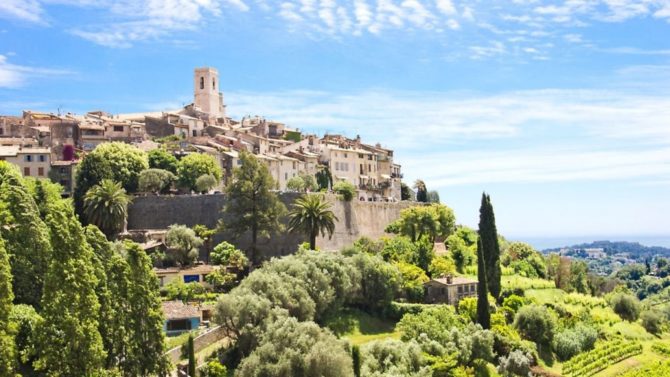 I’ve just stepped out of the fragrant opulence of Maison Godet, sniffing my wrist surreptitiously. I’d like to think that by wearing the perfume house’s creation from 1925 – Folie Bleue – perhaps I might have something in common with the muse for whom the artist Henri Matisse commissioned it from this family-run parfumerie. No matter, wandering aimlessly in a scented cloud created for an artist seems an appropriate way to enjoy the charms of a village whose arteries flow with the outpourings of creative minds.

There isn’t a corner of Saint-Paul de Vence that doesn’t somehow have an artistic connection, be it a shop window filled with huge, gaudy, avant-garde modern sculptures or a gallery crammed to bursting with familiar names from an era which saw Saint-Paul rise in popularity. The tiny town has seen arguably more than its fair share of famous artists over the past century or so. Matisse, Picasso, Modigliani and Jean Michel-Folon all spent time in its steep, narrow streets, doubtless inspired by that certain quality to the light, or perhaps the geometry of the buildings.

Just a few paces from the Maison Godet, I find myself at the entrance to the town cemetery. I’m here to see the final resting place of Marc Chagall, who lived here for the last three decades of his life until his death in 1985. It’s a modest but well-cared for grave, and the views from the cemetery would almost certainly have pleased the artist. Having already browsed the impressive variety of boutiques behind me, I follow the road that leads around the perimeter of the village, stopping off for a glass of chilled pale rosé at one of the bars-with-a-view, looking out over the rolling countryside.

Refreshed I duck back into the narrow streets, which are all but impossible to get lost in. My route trends ever upwards past Number 2 Montée de la Castre which was home to actors Yves Montand and Simone Signoret at the beginning of their love affair, towards the Place de l’Église. This is the highest point of this perched village, with the town hall and the medieval Église de la Conversion-de-Saint-Paul with its 17th-century Chapelle des Pénitents Blancs, known as the Folon Chapel for its decorations which were Jean-Michel Folon’s final project before his death in 2005.

Turning my back on the busy narrow streets of the village, I leave the 14th-century ramparts behind me, passing the village’s terrain de boules and the famous La Colombe d’Or hotel and restaurant where Montand and Signoret were supposed to have met. I cross the main Route de Vence and take a walk along the Chemin Sainte-Claire. My destination is the Fondation Maeght, home to an ever-changing array of modern art and beautifully tended sculpture gardens, but the Chemin itself is a pleasure in its own right. I pass tiny chapels – the 15th-century Chapelle Sainte-Claire, dedicated to the patron saint of Saint-Paul’s countryside, then the 17th-century Chapelle Saint-Charles-Saint-Claude with its Paul Conte murals from 2012. I pass reproductions of some of Chagall’s paintings of the area, set up to showcase the views of the village that inspired them. The route trends ever upwards until finally I reach the gates of the Fondation Maeght, with its serene grounds filled with world-class works of art. It’s a fitting ending to a day surrounded by artistic inspiration.

Where to Stay and Eat in Saint-Paul de Vence

The Hôtel Alain Llorca’s main draw is its gastronomic restaurant, but it also has a small swimming pool and beautiful grounds. It’s located just a short distance away in La Colle-sur-Loup, with incredible views of Saint-Paul and the coast. The Surprise seasonal tasting menu is incredible and costs €150 per person. Menus from €53 (lunch), à la carte mains from €50. Open lunchtimes 12-2pm and evenings 7.30-10pm every day. Hotel rates: Doubles from €256.50, breakfast €20.

Previous Article Buy a home with a food & drink business in France for less than £150,000
Next Article Musketeers, Mona Lisa, Money-saving tips: 13 Things we learnt in the August issue of French Property News (plus Living France), out now!