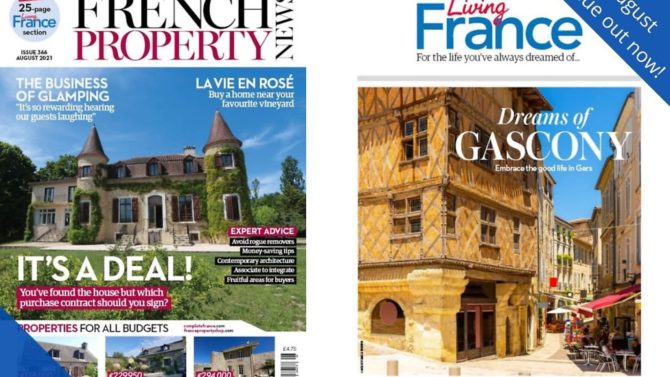 The August issue of French Property News with 25-page Living France section is out now!

Toulouse has seen its number of potential buyers double since January p.9

2. A fake fetches a fortune!

A copy of the Mona Lisa, the Hekking Mona Lisa, sold by auction for €2.9 million p.11

The second half of April is the best time to see the display of cherry blossom trees in full bloom p.30

4. As seen on A New life in the Sun : A business in Tarn-et-Garonne

5. The heritage of Hérault

If you want affordable property in a historical centre with winemakers’ homes on the outskirts it might be an idea to look at the town of Clermont-l’Hérault p.50

There are roughly 150 vegetarian restaurants in France p.55

Joining a non-profit organisation, or association might help towards applying for French citizenship as it shows you have integrated p.58

The Croix de Lorraine and the letter V were a symbol of resistance against the Nazi Occupation, and it can still be seen on some buildings in France p.66

9. Making the most of your money

If you time your purchase right with the currency exchange, you could be maximising your property budget and saving a lot of money p.72

10. Driving circles around the rest of the world

France is believed to have the most roundabouts in the world p.78

11. The most famous musketeer

D’Artagnan, one of the Three Musketeers, was born in Lupiac in Gers in 1611 p.90

An estimated 95% of the town of Vire in Normandy was bombed during the June 1944 D-Day invasion p.116

If you want to read and learn more about buying property and living in France, take out our great subscription offer and get the magazine delivered to your door every month!

On the cover : A beautiful eight-bedroom Gascon Chateau on the market with Le Bonheur