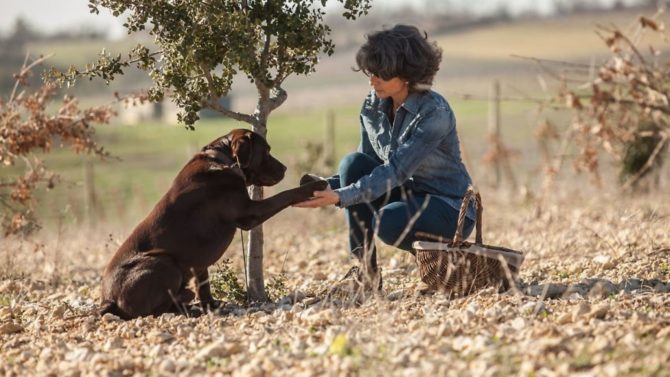 Truffles, France’s black diamonds, evoke an elusive mystique as well as a deliciously rich flavour in a variety of dishes

It’s 2:25pm on a Tuesday in the little village of Lalbenque, south-west France. Amid the gathering in the main street of mostly locals, tension is high. All eyes are on two rows of wooden trestle tables, where men wearing flat caps and wrapped in winter jackets stand with arms crossed expectantly and women in scarves flapping in the wind greet a neighbour with a quick wave before glancing at their wristwatches and then towards a red flag at the top of the steps of the Hôtel de Ville. Below this flag I spot a sign and suddenly the tension – not to mention the somewhat earthy aroma – makes sense; the sign says ‘Marché aux Truffes, Ouverture à 14H 30’.

As the appointed time approaches, a municipal official in an orange hi-vis jacket blows a whistle and waves the red flag with a smile, and suddenly the action near the trestle tables is a heated frenzy of gesticulation and questioning, of sniffing and holding of the knobbly black nuggets lying in red-and-white-gingham-lined baskets on the tables. If you have a soft spot for truffles, specifically black Lalbenque truffles, aka ‘black diamonds’, this wholesale market held each Tuesday afternoon in winter is your paradise.

Inside the town hall, truffles are weighed, and a super creamy truffle cheese created on the spot and available to buy. The actual truffle transactions appear to be over in mere minutes and I quiz my French guide about what has transpired. There’s a typical Gallic shrug as to why some baskets were already covered up and seemingly reserved for buyers prior to the 2:30pm kick-off. Why have some not sold, though? ‘I think perhaps these ones could be too expensive? This is the second-last truffle market of the season, so these people are hopeful that if they come back next week, they could be cheaper.’ That’s even more truffle tension for next week’s market.

Truffle touching, sniffing and observing… if you think one of the most important human senses is being neglected here, fear not. Just five miles from Lalbenque’s truffle market lies Château de Haute-Serre, a vineyard built from scratch on an abandoned estate by Georges Vigouroux, where his son Bertrand now makes excellent Malbec. Here you can not only indulge in a wine tasting but also various truffle experiences during the season. One of just five restaurants in the Lot region that holds a Michelin Bib Gourmand, La Table de Haute Serre is where I happily indulged in a four-course Toques ‘n’ Truffles lunch, chef Allan Duplouich dishing up the likes of truffle scrambled eggs; haricot bean and beetroot salad with foie gras and black truffle; Jerusalem artichoke, shaved truffle and chard farci; and crème brûlée with truffle ice cream.

One of the most anticipated parts of my trip was not just the truffles and the wines but the opportunity to meet Iago, the truffle-hunting dog, during cavage near the Château de Haute-Serre’s vineyards. I think I was expecting perhaps a focused beagle or a sharp-eyed springer spaniel, so the sight of the cute chocolate Labrador that came bouncing out of owner Christine Vigouroux’s car, tail wagging and very receptive to pats, was quite the surprise. One advantage of training dogs rather than pigs, is they are less likely to eat the precious fungi. As the wind whipped up and rain started to spatter our muddy boots, Iago was let off the lead and got down to action, racing towards the 1000 or so trees (two kind of oak, hazelnut and linden) specially planted to encourage truffle growth in the soil beneath. Circling about the damp ground, Iago soon started digging, with Madame Vigouroux praising his efforts as, with a gloved hand, she helped unearth the first truffle.

Iago’s efforts intensified but so did the rain, so after applauding several of his truffle trophies, we battled the elements back to Château de Haute-Serre’s winery for a Truffle Hunter’s Tea. Somewhat soaked through and windswept, I was thrilled to learn this tradition involved not ‘tea’ as such, but a steaming glass of mulled wine and millas cake (a rustic pumpkin cake traditional to south-west France, kind of a cross between a clafoutis and a flan in style), which was the perfect way to cap off an exhilarating afternoon.

My truffle fairy-tale experience was yet from over, however. I was staying at the Château’s sister property, the 13th-century Château de Mercuès, which has also been transformed by the Vigouroux family into a 30-room luxury hotel and wine estate, complete with an underground winery and cellar beneath the castle’s medieval terrace. Its Michelin-starred Le Due?ze restaurant is the sublime setting for chef Julien Poisot’s seven-course truffle tasting menu where, after some welcome snacks fireside, we’re aromatically tantalised with a platter of truffles before settling in to see how they’re reinvented over the course of several hours. Artichoke stuffed with braised beef cheek and Malbec sauce covered in black truffles? Lightly seared scallops, leek gourmandise with truffles and a scallop and Noilly Prat jus? These are just some of the highlights, and if you want a closer look at the action, you can request the cosy chef’s table right next to the kitchen where, in between truffle culinary epiphanies, you might even pick up some cooking tips to take home with you.

The best places to buy a property in Lot