Paradise found: The simple pleasures of a French cheese shop 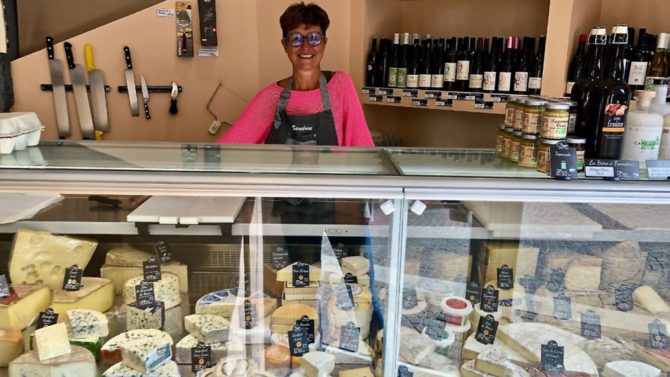 A visit to a humble fromagerie is a gourmet odyssey through France’s many delicious varieties of cheese, from brie to beaufort

Eating cheese. Another national pastime in France. How could it not be with 2 million tonnes of it being produced here each year? It is almost impossible to put a number on the different varieties of French cheese – but it is well upward of 1,000 when the endless number of sub-categories are taken into consideration.

Roughly half the French population eat cheese daily and the seriousness with which cheese is regarded in France cannot be understated. French writer, Émile Zola, in his 1873 book The Belly of Paris, included a section about a cheese shop, known as the Cheese Symphony.

“Every now and then, however, a slight whiff, a flute-like note, came from the Parmesan, while the Bries came into play with their soft, musty smell, the gentle sound, so to speak, of a damp tambourine. The Livarot launched into an overwhelming reprise, and the Géromé kept up the symphony with a sustained note.”

A more current story making the headlines is chef Marc Veyrat suing the Michelin guide for taking away one of his stars. An inspector believed that there was cheddar in his soufflé, an accusation which has been strenuously denied. Cheddar just doesn’t make the grade when up against the top cheeses in France.

So where to begin to learn? The cheese aisles in an average French supermarket do pay reverence to this national obsession but to really wallow in the joys of curdled milk, a visit to a proper cheese shop is the only way to go.

La Fromagerie Saint-Pierre in Gaillac (in the south-west of France) opened its doors on July 14th 2016. Owned and managed by Sandrine Vuaflart., there is a calm coolness as you open the door into this cheesy paradise. The smell and the gorgeousness of the cheese display assault the taste buds within seconds, a sensation accompanied by the visual delights of bottles and jars of cheese-enhancing goodies such as chichons de canard, confiture fraise mojito and miel fleurs sauvages.

Cheese runs through Sandrine’s veins. Her brother, Jean-François Remond, founded the nationally-recognised Le Pic brand in the 1970s, his goats’ cheese dairy just half an hour from Gaillac. His most famous creation is the Rouelle de Pic, an unpasteurised goat’s cheese. In order for American cheese fans not to miss out, he makes a pasteurised version which can be exported to the States.

Jean-François’s passion and conviction for the cheese-making process is unwavering: “To produce good cheese, you need happy goats who will provide good quality milk”. He insists that producing cheese using raw milk means retaining all the delicate subtleties and character through the small changes to the goats’ diet, whether through the plants they eat or the water they drink. Such is the level of detail and thought involved in making his cheese.

Sandrine’s passion is equally tangible and her knowledge on such a vast subject, impressive. She explained the conundrum between selecting an AOP (Appellation d’Origine Protegée, an official standard stipulating the origin and production method of a cheese) and, for example, a locally-produced cheese without this classification.

AOP include some of the big, better known names such as Brie de Meaux, Saint-Nectaire, Beaufort and Reblochon. There are 45 French cheeses under this banner and while their quality and deliciousness are undisputed, Sandrine argues that non-AOP cheeses are just as good, if not sometimes better. For her, these cheeses have an added taste of the terroir, that not-quite-translatable word meaning roughly “of the earth”, a quality she believes the AOP cheeses sometimes lack.

I have personally eaten French cheese which tastes like it has been scraped off the dairy floor, such is the pungency of cowshed odours released upon opening the wrapping. I think this is what Sandrine means by terroir.

La Fromagerie stocks around 200 different cheeses which are bought through two different routes. Bigger brands and AOP varieties they buy through wholesalers but a large percentage of their products come from local producers, including her brother.

There are many local producers to choose from but for the ultimate cheese hit, Sandrine travels to the Mondial du Fromage every two years where dairy folk present their products and discover others. Her intriguing find this year was a range of goat’s milk liqueurs. La Capricieuse offers three flavours: aromatic plants, chestnut, and apple. My taste buds didn’t spring to life at the thought but I did succumb to a jar of Confiture de lait du chèvre à la noisette – a kind of nutty, less sweet dulce de leche.

I had to ask the obvious question: being surrounded by cheese all day, do you still like eating it? “Yes, of course!” she replied, although she had to give more thought to which cheeses were her favourite. Among them were Brie de Melun and Maroilles which she buys in for La Fromagerie but she also mentioned several English cheeses she loved: Stichelton, (similar to Stilton but using raw milk rather than pasteurised), particularly from the Neal’s Yard Dairy, and Lincolnshire Poacher. Was the sky falling down? A Frenchwoman admitting to a love of English cheese?

Her bestsellers remain fairly traditional: Comté, Emmental and Saint-Nectaire but perhaps in a nod to my origins, she indicated that among her British clientele, it was the stronger cheeses which were the most sought after such as Epoisses or Livarot.

HOW TO SERVE CHEESE

Questioning moved on to how to select for a cheeseboard. “There should be five definites”, she replied. “A soft cheese like a Brie or a Camembert. A hard cheese such as Comté or Gruyère. A blue cheese made with either cow or goat’s milk such as Roquefort. There should also be a goat’s cheese like Selles-sur-Cher and finally a cheese made with ewe’s milk like Ossau-Iraty.” This covers all bases and all tastes.

On the subject of serving cheese, I told her the story of a friend’s father who was distraught when his housekeeper inadvertently took apart an entire Stilton. He thought it had gone mouldy and he needed to remove the blue bits before it could be eaten! It can safely be said that this would never happen in France.

HOW TO MATCH CHEESE WITH WINE

Cheese on its own is heaven but with an accompanying glass of wine – divine. Sandrine stocks organic wine only. Much of it from the Gaillac vineyards, where wine-making existed 1,000 years earlier than in world-renowned Bordeaux. Wines such as Château Mayragues who produces through biodynamique methods, organically and following the astronomical calendar. Or La Vignereuse who produces a sparkling red wine for a perfect Christmas apéritif.

Previous Article Discover Arles in France known for its rich Roman and artistic history
Next Article Why is lily of the valley given on 1 May in France?