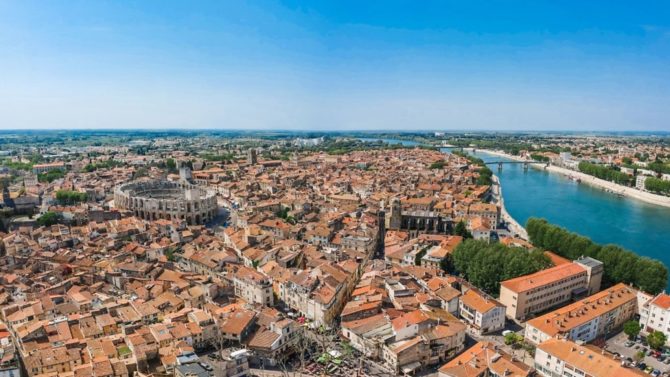 It’s a balmy morning and I’m watching the world go by with a thé glacé in hand. I glance across at the buttercup-yellow building and a few minutes later it dawns on me: this is the exact setting for one of Dutch post-Impressionist painter Van Gogh’s most iconic works – Café Terrace at Night.

I’m in Arles, once a provincial capital of Rome, where stunning antique treasures today stand shoulder to shoulder with the shady squares and snaking, sunbaked side streets so vividly captured in the 300 or so works produced by Van Gogh during his time here.

Straddling the mighty Rhône on the western fringes of Provence and serving as a gateway to the stunning Camargue region, Arles was founded as a Celtic city before being developed by the Romans. They named her Arelate and by 123 BC she had transformed into an important Mediterranean city.

Vestiges of the city’s Roman heyday remain, with the most striking being the stunning amphitheatre. Unlike other remains of the Roman civilisation in Europe, this colosseum – which stands 21m tall and is 106m in length – remains largely intact. Built around 80 BC, the amphitheatre once attracted more than 20,000 spectators to watch gladiators and wild animals meet their grisly ends. Today, the towering monument is used for outdoor shows, concerts and bull races known as the Courses Camarguaises, which see participants risk getting cuts and bruises, with no animals being harmed, thankfully.

Just steps from the amphitheatre lies the equally impressive Roman Theatre. Built at the behest of Roman Emperor Augustus in the 1st century BC, this structure is sadly not as well preserved, but no less magical for lovers of Ancient Rome, with its orchestra section and two remaining marble columns giving some indication of the setting here during Roman times. It still operates as an important venue in the city, staging summertime concerts and plays with seating for up to 10,000 people.

For even greater insight into the Romans, I take the stairs from the modern-day city centre down into the cryptoportiques of 2,000 years ago, a series of fascinating underground chambers sitting directly below the Roman forum. They are believed to date back to the first Roman colony in the city in 46 BC, home to shops and storage cellars, with the north to south axis measuring 90m in length.

Fast forward to the 12th century and Arles witnessed the emergence of stunning Romanesque architecture, with a fine example being the Church of Saint-Trophime. Inside lies the intricately sculpted western portal, bearing a tympanum depicting the story of the Apocalypse, along with a cloister displaying capitals that show Christ entering Jerusalem.

Over 700 years later, on a cold winter’s day in 1888, Vincent van Gogh arrived in the southern French city in search of the bright light and colours of Provence. The city’s golden-hued streets and monumental architecture quickly inspired the Dutch-born painter, becoming immortalised in some of the many works he produced during his 15-month stay.

Testament to his prolific artistic output while living in Arles is the Fondation Vincent van Gogh. Housed in a 16th-century building that was extensively refurbished in 2014, this top attraction sadly lacks a permanent Van Gogh collection; instead, it welcomes a couple of excellent exhibitions every year, each one with a Van Gogh theme and featuring at least one of his greatest works. I find the museum nothing less than impressive, while the glorious views from the rooftop terrace are the icing on the cake.

While I was acutely aware of Van Gogh’s influence on the city before arriving in Arles, it came as a surprise to learn that Picasso had been here, too. The nearby Rhône-facing Musée Réattu, replete with paintings from the neo-classical, Arles-born painter Jacques Réattu, is also home to 57 drawings by Picasso, which he donated in 1971, sealing his love for Arles and Van Gogh’s work. Picasso’s donation breathed new life into the museum’s collections, with his drawings today filling three of the 16 exhibition rooms.

Arles is a city strongly rooted in the past, but in spring 2020 it confirmed its ability to be forward-thinking, too. Rising inexorably out of a disused railway yard is the Luma Arles Tower, a 56-metre-tall twisted tower complete with 11,000 irregularly placed aluminium panels and projecting glass boxes. This emblematic building designed by award-winning American-Canadian architect Frank Gehry, the brains behind the Guggenheim Museum in Bilbao, will house a mix of artist studios, workshops, seminar rooms and research facilities.

This latest addition to the Arles skyline has got the whole city talking. I find myself wondering what Van Gogh would have made of it. “I think he would have embraced it and maybe featured it in a new painting,” says one of the Luma Arles guides. From what I’ve learnt about him this weekend I’m inclined to agree.

The compact city of Arles is situated at the northern apex of the Rhône delta on the western fringes of Provence. Arles is 1,038km from the port of Calais and 745km from Paris. Trains from Paris take around 3 hours 50 mins and depart from Gare de Lyon.

Situated in the historic centre just 500m from the Fondation Vincent van Gogh, this hotel offers 19 stylish guest rooms with flat-screen TVs, vintage furniture and free WiFi. There is also a bar on the rooftop terrace. Rooms from €137. lecloitre.com

Housed in a quaint 17th-century building, this popular rustic yet elegant restaurant specialises in more upmarket versions of Provençal cooking. Menu highlights include baked sea bream served with braised vegetables and bull steak cooked in a Thai-style broth. Mains from €21.

Dining at this two-Michelin-starred flagship restaurant from renowned chef Jean-Luc Rabanel is an artistic experience to be savoured, with many of the ingredients sourced from the chef’s very own vegetable patch. The wine pairings are just as delightful. Mains from €28.

21 new travel experiences to enjoy in France in 2021

In the footsteps of Pierre-Auguste Renoir