Ski high and snow sure in Tignes, Espace Killy 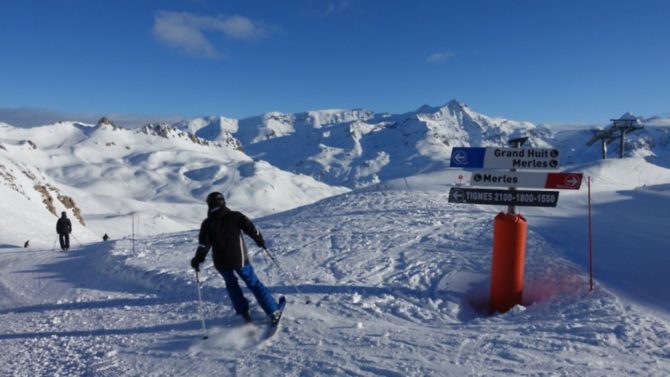 When super heavy snowfall made skiing tricky, Mary Novakovich found comfort in the welcoming bars and restaurants of Tignes

After years of disappointing early-season snow, last winter I decided to aim high. Really high. Up to 3,456m, in fact. If there’s one place in France you can be sure of snow, it’s Tignes, which shares the vast 300km Espace Killy ski area with its glossier neighbour Val d’Isère. Strangely, for a skier who’s covered most of the French Alps, I had never been to either of Espace Killy’s resorts. Keen to make up for lost time, I based myself in the highest village in Tignes, Val Claret, at 2,300m. We had left the tree line far behind as we made our way through various villages, passing snowdrifts that had been tidily arranged into towering white walls.

I had asked for a winter wonderland, and I got it. Rather a lot of it. For this was January 2018 – the winter of the most astonishing snow the French Alps had seen in decades. And sometimes it turns out that you can have too much of a good thing.

Blessing ourselves that we hadn’t arrived the week before, when heavy snow had closed many resorts across the Alps, we hopped on the Fresse chairlift in the centre of Val Claret. The lovely wide green runs of Borsat were a perfect place to get our ski legs back on the first day of our season. Unwittingly, we had crossed into Val d’Isère – I hadn’t realised quite how seamlessly these two resorts were linked.

This was brought home more clearly when David from the ESF ski school gave us an exhilarating guided tour of the ski area. A couple of chairlifts from Val Claret took us first to the Col du Palet and then on to the Aiguille du Chardonnet at about 2,700m – an endless vista of blinding white snow, blue skies and hardly a soul on barely touched pistes. It was the same as we skied down serene slopes from Aiguille Percée, ending up in lively Tignes-le-Lac, what appeared to be the most popular of Tignes’ villages. So this was where everyone was hiding. There had been no sign of them on the mountainside we had just left. And we weren’t exactly early birds making first tracks.

The village’s giant red sculpture spelling out Tignes was already half buried in snow from the previous weeks’ deluges. From here we took the cable car to Tovière at 2,705m, where there was a bit of a party atmosphere going on. As it’s one of the best viewpoints in this part of the ski area, people were milling about enjoying the sunshine, all the while being serenaded by a group of men dressed like Monty Python’s drag ladies singing the Carpenters’ ‘Top of the World’. Sweet, silly and surreal at the same time.

We left them to it and pootled our way through the sea of blue and red runs towards Bellevarde, once again straying into Val d’Isère territory. David pointed out the slalom course that was part of the women’s world cup circuit, whose difficulty made me happy to stick to the intermediate runs.

We also discovered how easy it was to ski to La Folie Douce in Val d’Isère, the birthplace of the raucous après-ski bar and restaurant franchise that has since expanded all over the French Alps. This winter it’s been even more accessible thanks to a speedy new gondola from La Daille that opened in late 2018. “Nice place for lunch for later in the week,” I thought, but the weather gods had other plans.Thanks to David’s guidance, we were able to get a good handle on the area and if heavy snow hadn’t arrived that evening leading to the closure of the lifts, then we could have explored further and I might have had my lunch at La Folie Douce and danced in the mountain sunshine.

Snowed in but undaunted, we swapped ski boots for snow boats and got to know Tignes at ground level. With everything wrapped in a thick layer of snow and cloud, the resort’s somewhat harsh modernist architecture was given a much softer look.

Val Claret’s restaurants were the first to get thoroughly inspected. Restaurant Pépé 2000, where the French outnumbered the British, had a decent lunch special of onion soup and steak and frites for €16. Its neighbour, Grizzly’s, was obviously the place to be: a busy, buzzing warren of faux-fur-covered wooden furniture with a huge barbecue on the terrace churning out grilled meats. I was lured inside by the sight and smell of sizzling diots, those juicy fat savoyard sausages that are high on my list of must-eat Alpine foods. But popular as Grizzly’s was, it promised more than it delivered for the above-average price.

Laid-back little Aspen Coffee Shop had big burgers at small prices and friendly staff to boot. La Pignatta was another warm place with reasonable prices and excellent pizzas. The fondue savoyarde at Brasserie du Petit Savoyard featuring the holy trinity of Alpine cheeses – beaufort, comté and emmental – was superb and nearly had me in a swoon.

But the proper swooning was reserved for one of those lunches that make you simply ecstatic to be in the mountains. The funicular to the glacier at La Grande Motte was still running, even if the glacier’s lifts weren’t. At the top of the station at 3,032m is Le Panoramic, the mountain restaurant run by the same Bouvier family that owns the five-star Hotel les Suites in Val Claret. While the wind howled and the snow swirled and covered everything in a grey gloom, we warmed up in the snug, classy interior, where the aromas coming from the wood-fired grill gave us a hint of what to expect.

The waitress brought out a shoulder of suckling pig that had just been grilled, before taking it away to have it split up into manageable chunks and brought back with some green salad and mash. The person who made the latter evidently gone to the Joël Robuchon school of making mash – just add butter, lots of it, then some more, and to be on the safe side, add another dollop. Pure, unadulterated, buttery heaven. Add to that the gorgeously melting pork and you have a truly unforgettable meal. The lavish mini meringues and chocolates that came with coffee made me glad I had passed on dessert.

All this food had to be worked off somehow. Even as a tiny number of lifts slowly began to open over the following days, we found it frustrating trying to squeeze on to the few available pistes that were filled with equally frustrated skiers and snowboarders. And heavy snow continued to fall from leaden skies, obliterating visibility.

Rather than wait for the resort’s shuttle bus, we got into the habit of walking along the 2.5km pedestrian trail that connects Val Claret with Tignes-le-Lac across the frozen, snow-covered lake. This wide, white expanse swiftly became our favourite walk, a place to feel the wonder of the mountains and revel in the stark, snowy beauty around us.

Tignes-le-Lac had a livelier atmosphere than Val Claret – not to mention a twice-weekly market where we stocked up on cheese, nibbled on saucisson and warmed up with glasses of vin chaud. The village is also home to Le Lagon, a large spa complex where we could relax in the bubbling pools and whoosh down the water slide, pretending to be kids again.

After a walk back along the frozen lake, where we spotted teams of husky dogs joyfully dashing through the snow, I had found an excellent spot for a supremely indulgent hot chocolate treat. For a relatively large space, the Whitney Bar at the Hotel les Suites made you feel as if you’ve been wrapped up in a cocoon and its rich hot chocolate came with boozy chartreuse-filled chocolates, just to add to the decadent feeling. The Bouvier family dog, a lumbering Saint Bernard called Iglu, was in his customary snoozing place, impervious to all the sighs of smitten passers-by.

The feeling of needing to snuggle against the elements continued in our hotel, the Curling, which was run by Inghams. Although this simple three-star wasn’t on the same level as its five-star neighbour, it still had a cosy lounge filled with oversized leather sofas. Come 4pm, it would slowly fill with sodden guests heading straight for tea and cakes. There was a relaxed conviviality about the place, which extended to the three-course evening meals. The Inghams staff had a knack of sitting like-minded strangers together at dinner, which meant we didn’t stay strangers for long.

Much as I was itching to get back on fully functioning slopes again, it was still a joy to be in the mountains. High above the treeline, there was a mesmerising stillness to the air, and the snow had a pristine quality despite the serpentine tracks carved by indefatigable off-piste skiers.

But my taste of Tignes was tantalisingly short, and it left me wanting more. While the architecture didn’t bowl me over – not being a particular fan of 1960s French ski resort modernism – the slopes and landscapes were another story. Further down in the lower-altitude Tignes villages, there were pistes sheltered by pine forests, which had their own charm. But there was something about the endless snowy moonscape of the higher altitudes that had me in its grip. Next time, I’ll take a closer look at the forecast, just to be on the safe side.

Mary travelled with Inghams, which offers seven nights at the Chalet Chardonnet near the Tovière gondola in Tignes-le-Lac from £889pp. The price includes flights into Geneva, coach transfers, seven buffet breakfasts and five afternoon teas and dinners including wine www.inghams.co.uk