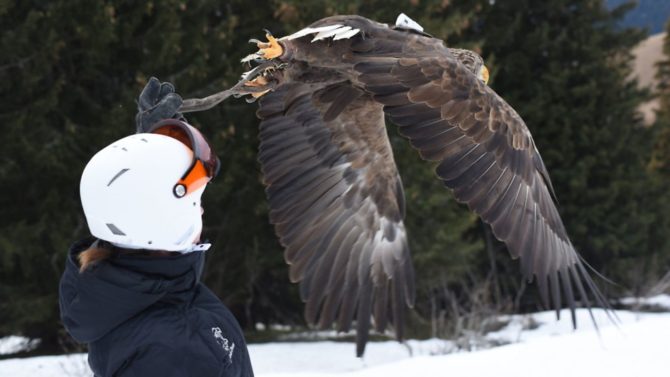 From eagles soaring down the ski slopes of the Alps to cyclists speeding around Normandy, find out what exciting events are happening in France this month

There’ll be some unusual skiing companions on the slopes of Savoie Mont Blanc this spring as the Festival Aigles returns to the resort of Val d’Arly. This unique spectacle sees eagles, vultures and falcons – plus their experienced handlers – join skiers for a descent like no other.

Combine a love of great cheese and magnificent hikes in luscious countryside with this snowy trek through Aubrac on 17 March, interspersed with delightful food and drink breaks. Now in its 33rd year, this event allows you to choose from one of three routes, between 12-21km long, with stop-offs at welcoming burons along the way.

Mulhouse’s lively carnival is reminiscent of Fasnacht celebrations in nearby Basel; in fact, its location near the border means it attracts lots of visitors from Germany and Switzerland as well as participants from across France. Over one long, wild weekend, a number of parades with colourful floats take over the streets, culminating in the great international parade on the Sunday.

Discover the latest trends in literature at the annual Livre Paris (formerly called the Salon du Livre), at the Expo Porte de Versailles exhibition centre in Paris in March. The annual book fair attracts around 1,200 publishers and 2,000 authors, who take part in interviews, debates and signings.

Well-known as the Venice of the Alps, it’s no surprise that Annecy has an Italian-themed carnival complete with beautifully-painted masks and glamorous dresses. From 15-17 March, participants pose all around the city and photographers jostle to get the best shots. Many of the intricate costumes are made by hand, with designs inspired by the Commedia dell’Arte.

Film-lovers should take advantage of the Printemps du Cinéma event held over a weekend in March and visit the cinema for the price of just €4. An annual event, the Printemps du Cinema is organised by the Fédération Nationale des Cinémas Français and participating cinemas offer discounted entry to films (excluding 3D and IMAX) for the event. Details of the participating cinemas are available in the lead up to the festival.

An unusual music festival on the snowy slopes of the Alps, Rock the Pistes entertains skiers in the Portes du Soleil ski resorts in the Alps. For a week, the resorts host concerts from various musical artists, performing against stunning scenery. Tickets for Rock the Pistes include a day’s skiing as well as the concerts.

The Tour de Normandie covers a distance of 1,131km crossing all five departments in Normandy in seven stages. Each stage is an exhausting ride and it makes the ride a real challenge! If that seems too much for you, then you could always join the other spectators lining the scenic route to cheer on the cyclists.

Crime literature enjoys its time in the spotlight at the Quai du Polar festival, welcoming some of the world’s biggest crime writers. The internationally-renowned event is spread across many Lyonnais venues including the Musée des Beaux-Arts and the Hôtel de Ville. As well as the usual book readings and meet-and-greets, visitors can take part in a fictional crime investigation which involves hunting for clues around the city to solve a mystery and win a prize.

It can be hard enough conquering them at walk – so pity the poor souls who choose to run up the stairs of the Eiffel Tower for the Ecotrail Verticale. The race, a unique challenge for the bravest – or most masochistic – of runners, involves climbing 1,665 steps, seeing an enormous altitude gain of 276m. The reward upon reaching the top is worth the effort: a beautiful view of Paris by night.