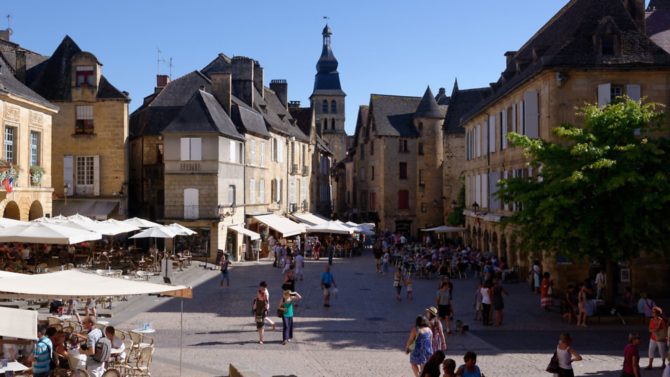 Sarlat-la-Canéda is a Dordogne favourite, where visitors never fail to be captivated by the town’s fine medieval architecture and gastronomic delights. Here’s our insider’s guide to the main attractions, restaurants and hotels and buying property in Sarlat-la-Canéda

Sarlat-la-Canéda is unsurprisingly one of the most popular towns in Dordogne. Located just a few kilometres from the River Dordogne in south-west France, the town has retained much of its 14th-century charm and its medieval architecture is still a main pull for its thousands of yearly visitors. A popular base for exploring the Vèzére valley, you could easily spend all of your time discovering Sarlat’s quaint medieval buildings, twisting alleyways and picture-postcard squares.

7 reasons why you should live in Dordogne

What to see and do in Sarlat-la-Canéda

Originally an abbey church dating from the 11th century, the Cathédrale St-Sacerdos is a mixture of Romanesque and Gothic styles. The organ in the church is said to be one of the best preserved from the 18th century. Pop inside to hear it being played as part of a special concert or simply soak up the peace and quiet away from Sarlat’s busy squares. Nearby you can spot the a rocket-like structure called ‘lanterne des morts’, a 12th-century stone monument that is said to honour Saint Bernard, who is believed to have cured the sick by blessing their bread.

House-hunters to Sarlat should stroll along Rue des Consuls, which has a number of impressive mansion houses that are testament to Sarlat’s growth during the Middle Ages. From being a small community controlled by the church, it had, by the mid-1500s, evolved into a prosperous market town popular with wealthy merchants. Further on you’ll see elegant buildings including the 16th-century Hôtel de Mirandol with its imposing doorway; the 14th-century Hôtel Plamon with its mullion windows; and the 15th-century Hôtel de Vassal with its double turret.

You can’t go to Sarlat-la-Canéda and miss the buzzing Saturday food market in the city centre. You might have to jostle for space among the crowds of eagle-eyed locals but it’s well worth it. Trestle tables are laden with farmers’ produce: fleshy red tomatoes, brightly coloured carrots, farm-fresh plums and twisted cucumbers sit alongside seemingly bottomless boxes of garlic, truffles, and trays of foie gras.

Another market well worth a visit is the indoor market at Église Sainte-Marie. Enter through the gigantic steel doors, and you’ll see stalls piled high with everything from spicy saucisson to local St-Nectaire cheese. Don’t forget to look out for the church’s main attraction; a glass lift that rises up through bell tower to reveal breathtaking views over the rooftops of Sarlat and beyond.

Place des Oies is where you can see the life-size bronze statue of three geese that seems to appear on every postcard of Sarlat; birds that have served as a delicacy for many Salardais over the centuries. Meanwhile, on Place de la Liberté, many visitors might experience a feeling of déjà vu, as this iconic square has often served as a backdrop for films.

7 reasons you should live in Dordogne

Located on Place du Peyrou and facing the cathedral, Bistro is a homely option and is great for dining on Dordogne classics. Chef Sylvain’s menu is laden with walnuts, duck breast and pommes sarladaises. Menus start from €18.

In Le Regént you can expect to dine on high-quality traditional cuisine. Located on the central Place de la Liberté, Le Régent is perfect for both a lunch in the sunshine or for a romantic dinner at night where views over Place de la Mairie set the tone.

The modern menu served at Le Petit Manoir contrasts with its old-world setting of a 15th-century mansion. Local products are given an Asian twist and diners can choose to eat in the beautiful gardens or in the 15th-century dining rooms.

Dordogne vs Languedoc: where to buy?

Budget: Located on a hilltop, La Maison des Peyrat is a characterful budget hotel in Sarlat. Rooms have lots of original features and there is also a tranquil, romantic garden for guests to enjoy. The town centre in Sarlat is just ten minutes away.

Mid-range: The family-run Hôtel La Couleuvrine is situated in the centre of Sarlat, on a leafy square. The 26 rooms are bright and functional and decorated in a traditional style with lots of bright colours, beamed ceilings and a mix of modern and period furniture.

Mid-range: Hôtel Les Remparts is a charming, recently renovated hotel 50 metres from the centre of Sarlat. The 25 rooms have free Wi-Fi, air conditioning and flat-screen TVs. Staff are happy to suggest places to eat and things to do. Double rooms from €59.

Luxury: All 11 rooms in Clos la Boëtie are named after the châteaux of the Perigord and go some way in suggesting the luxury, romanticism and comfort of the 19th-century residence. The boutique five-star hotel has an indoor heated swimming pool, an organic wellness centre and a sauna. Rooms start at €120.

The average price of a house in Dordogne is €115,000, while the average price of an apartment is €1,210 per m². In general, Dordogne has long been a favourite among British buyers, and it has now caught the attention of Dutch and German property investors. As such a popular tourist destination, Sarlat-la-Canéda could be ideal for people looking for a buy-to-let investment and it is common to see renovated flats and small homes in the medieval quarter being used as such.