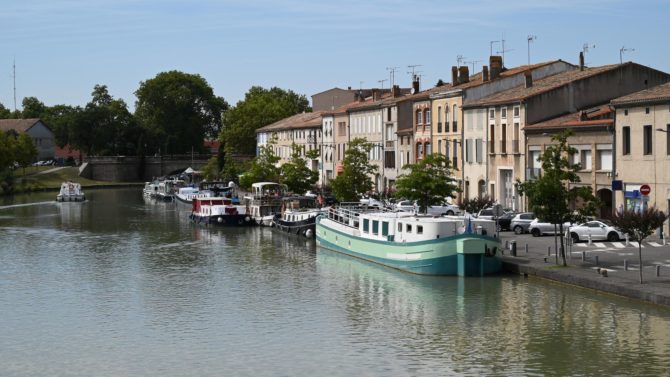 One of the most popular stopping points along the Canal du Midi, and home to the Foreign Legion, the town of Castelnaudary in Aude has long been a destination for travellers. As far back as Roman times, when it was on the main trading route between nearby Toulouse (just 50km away) and the Mediterranean coast, Castelnaudary has offered a place to rest and restore. Capital of the historic territory of Lauragais, it is a rural area, growing produce to feed the surrounding towns and cities. In the 17th century, the town flourished thanks to the building of the Canal du Midi and the resulting increase in trade. The canal now brings hungry visitors to the town, in search of a hearty meal in the ‘world cassoulet capital’.

What should I see and do in Castelnaudary?

The Canal du Midi is one of Castelnaudary’s major attractions, including the Grand Bassin which – at around 7 hectares – is the largest body of open water along the canal.  Take a guided boat trip, hire a small craft, or just enjoy the canalside paths on foot or by bicycle. Visit the Poterie Not which still uses traditional techniques in its production of beautiful pottery, including the cassole pots which gave the famous delicacy its name. On Thursday evenings throughout the summer, visitors can enjoy the best of local produce at one of the night markets., while the last weekend in August brings the cassoulet festival, lively with open-air music events, entertainment, a gourmet market, floral processions and of course cassoulet.

Where should I eat and drink in Castelnaudary?

Castelnaudary is renowned for its cassoulet. The hearty stew made from haricot beans, pork rind, knuckle, shoulder and sausages, as well as confit duck is one of the highlights of traditional rural French cuisine. The dish features as a highlight in many restaurants, such as Le Tirou (mains from €21.50, menus from €36) a rustic family inn mentioned in the Michelin Guide that celebrates the cuisine of the region.

Where should I stay in Castelnaudary?

It’s hard to argue with the notion of a small intimate ten-roomed hotel (including two suites) that also has its own gastronomic restaurant, specialising in, you guessed it, cassoulet! The three-star Hotel Le Centre lives up to its name and offers good value for money and modern decor (doubles from €69 low season/€74 high season).

How do I get to Castelnaudary?

Flights are available from UK to both Carcassonne and Toulouse, around a 30-minute or 50-minute drive from Castelnaudary respectively. It takes about 7 hours 40 minutes to drive to Castelnaudary from the port at St Malo.