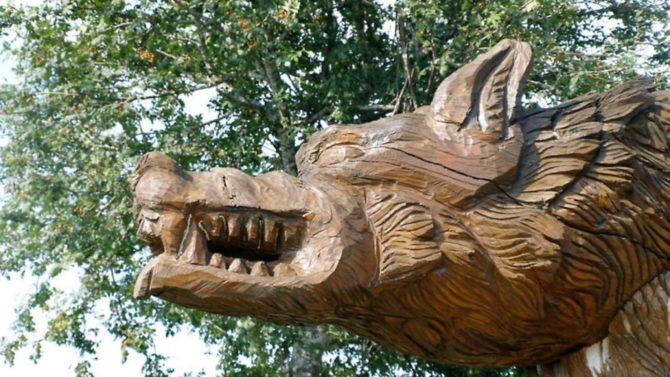 Discover the story of the giant, murderous beast that stalked the inhabitants of a remote region in the south of France

Driving through Lozère, you know instantly that you are in France’s most sparsely populated department. You will encounter far more sheep and cattle than you will people. Ignored by most guidebooks, Lozère’s medieval villages and idyllic pastoral scenes attract few overseas visitors. Yet the region was once renowned throughout France, its notoriety even spreading to London and other major European cities. Back then, it was known by another name – Gévaudan.

From 1764 to 1767, a giant murderous beast stalked the inhabitants of remote Gévaudan. In the space of just a few years, at least 100 women and children (and some reports claim as many as 300) were killed, with more seriously injured. The beast’s reign of terror came to an abrupt end in 1767, but it remains a strong part of local folklore, even though it is still shrouded in mystery.

The best place to begin in search of the beast is Saugues, at the Fantastic Museum of the Beast of Gévaudan (Musée Fantastique de la Bête du Gevaudan). A series of 22 dioramas guides you from the first attack, through various attempts to capture the beast, to its eventual killing (tickets €5.50). Elsewhere around town, a variety of sculptures and carvings depict the beast, which some have claimed was a wolf, others a giant dog, and still others an escaped hyena.

Some 13km west of Saugues lies the village of La-Besseyre-Saint-Mary. This small collection of stone farmhouses has changed little since 1767. There is, however, one reason to visit, and that is to see the small marker dedicated to Jean Chastel. On 19 June, 1767, local farmer Chastel took aim with his rifle and shot the fatal bullet into the chest of the Beast of Gévaudan. Since then, rumours and legends have run rampant. Some argue that far from being a hero, Chastel was, in fact, a serial killer, using a trained mastiff to attack unsuspecting peasants.

A short six-kilometre drive brings us to the next hamlet in our story. With barely a dozen buildings and a small church to house its population of just 54, Auvers was home to a heroine in the tale of the Beast of Gévaudan. Marie-Jeanne Valet was just 19 years old when, in August 1765, she came face to face with what she would later describe as “an unusually large dog”. Fortunately, by this time word of the strange and brutal attacks had spread throughout the region, and so Marie-Jeanne carried a homemade spear with her. She plunged it into the animal’s chest, causing it to howl in pain and retreat across a nearby stream. Stories of her courage were told across France and a statue at the edge of Auvers pays tribute to her actions.

Outside of the villages and hamlets that dot the Haute Loire and Lozère landscape, the gently rolling hills stretch for miles. Here and there, sharp rocky outcrops cast ominous shadows across the otherwise serene countryside. It is easy to imagine the isolation of farm life in the 18th century and to understand how a wild beast could roam unseen, waiting to pounce.

A fortress has stood at Saint-Alban-sur-Limagnole since at least the 12th century. In the 1760s, the château and fort housed a number of troops, sent by the king to defend the local people. Today, the château is used as administrative offices for the town. As such, the interior is not open to the public. Nevertheless, visitors can go into the courtyard and wander the winding lanes where soldiers once marched on their way to hunt down the elusive beast.

One of the first known attacks occurred some 36 km from Saint-Alban-sur-Limagnole in the woods surrounding the Château de la Baume. In 1764, a 12-year-old boy was watching his father’s cows when the beast struck. Luckily the boy survived to tell the tale. Originally constructed in 1630 on the site of an old medieval castle, the château, nicknamed the little Versailles of Gévaudan, was completed in 1720. It was abandoned during the French Revolution and stood untouched for decades. In the 1850s, it was bought by the Las Cases family, who still live here. A guided tour (available by appointment) shows off the well-kept décor, including intricate wood panelling, a sword reputedly used to injure the Beast of Gévaudan, and a magnificent chapel. There is also an extensive collection of pieces related to Napoleon, compiled by Emmanuel de Las Cases who accompanied the Emperor in his exile to St Helena (tickets €7).

By now, there is only one place left to explore. For the last thirty years, Les Loups du Gévaudan in Saint-Léger-du-Peyre has sought to restore the reputation of the wolf (tickets from €9). More than 100 wolves live within the park’s enclosures, with plenty of room to safely roam. An on-site museum charts the history of wolves in France, including the tale of the Beast. It also educates about the different types of wolves and ongoing conservation efforts. Fierce advocates of the lupine species, the park’s staff are quick to dispel the idea that a wolf was responsible for the attacks of 1764 to 1767. Visitors to Lozère can decide for themselves.

What’s it like to live in a National Park in France?

Previous Article FRANCE Magazine February 2021 UK: 7 things we learned about France in our new issue
Next Article Beautiful French properties for sale a stroll from the boulangerie