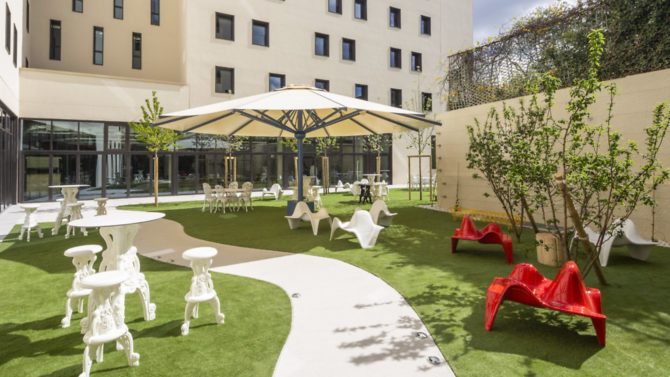 Since launching in Hossegor in south-west France, JO&JOE has arrived in Paris and is on its way to London too

Shaking up the hotel scene in Paris with colourful street art and affordable rooms, JO&JOE is the latest venture to open in the French capital.

Its Open Houses, a sociable mix of hotel and hostel, are open to travellers and Parisians alike serving simple, fresh food, offering a creative space to meet and somewhere to stay in private or shared rooms.

JO&JOE, a new brand from AccorHotels, has just launched its new Open House in Paris-Gentilly and has developed the interiors with UK-based architecture and design studio PENSON. Street art is everywhere, thanks to the work of nine French and international artists and it also has a large garden and outdoor space for relaxing, which also hosts yoga lessons.

The different types of accommodation on offer include ‘Together’ – shared, dormitory-like areas where several people can sleep. They can be made private for four people or more and cost from €25 per bed.

‘Yours’ are private, hotel-style guestrooms for two or three people which cost from €70 a night for two people and ‘Cabins’ offer a mix between the two, a private individual space but with access to a communal bathroom costing from €30 a night.

The restaurant serves a varied menu of homemade, local dishes throughout the day including quiches, burgers, salads and oven-roasted camembert from €7. It operates a cashless payment system with customers paying by mobile and there is also a beer wall where you can pour your own pint using a prepayment card.

JO&JOE Paris-Gentilly is located in Avenue Paul Vaillant Couturier, a short distance from the Cité Internationale Universitaire in the south of Paris, 20 minutes from Orly Airport and the Arc de Triomphe.

Its original Open House is based in Landes, south-west France, a five-minute walk from the sea, and it also has plans to open more sites by 2020 in London’s Shoreditch, Glasgow, Budapest, Rio de Janeiro and in Paris-Nation.

French life is sweet: From San Francisco to baking sensation in Paris

Previous Article 7 things we learned about France in the latest issue of FRANCE Magazine
Next Article Is it easy to get a French mortgage?