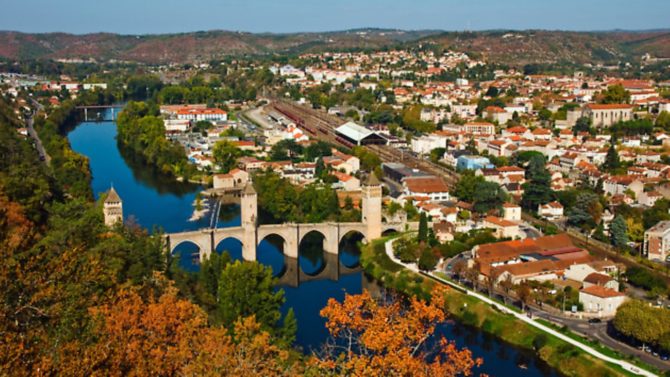 An insider’s guide to Lot in Occitanie, including the main attractions to visit on holiday, the best towns and villages to live in, the major festivals and events, and buying property in Lot

Lot shares a border with Dordogne and is often compared to its hugely popular neighbour. While Dordogne is better known, Lot can more than hold its own and is becoming increasingly popular with those looking to escape the ‘Dordogneshire’. So much more than just a bridge between Dordogne and the sunny climes of the former region of Languedoc-Roussillon, the Lot department is in fact an area of outstanding natural beauty which forms part of the stunning Lot valley.

Holidaymakers and expats searching for a French property in Lot can expect quaint villages bathed in sunshine, heritage, gorgeous food and wine, stunning scenery and fascinating caves to explore. If that isn’t enough, prospective homeowners can also anticipate affordable property and the quintessential French laidback lifestyle.

By train: Eurostar and then jump on the TGV to Montauban then regional services to Lot

By road: Cahors is an 863km drive from Calais

Places to visit in Lot

Cahors, the capital of the department, combines old and new, with its medieval and newly built parts standing side by side in perfect harmony. The city’s iconic feature has to be the Pont Valentré, an impressive 14th-century bridge with arched gateways and three towers which span the river. A well-trodden part of the route to Santiago de Compostela in the Middle Ages, it is now listed as a UNESCO World Heritage Site. It is easy to while away a day exploring the city with its ‘secret gardens’, medieval arcades and Renaissance houses.

Lovers of pretty French villages, certainly won’t be disappointed when in Lot. Located to the north of the department capital is the picture-postcard village of St-Cirq Lapopie. Designated as one of the country’s Plus Beaux Villages and is home to 13 historical monuments, it perches on a cliff high above a bend in the river and seems to reach up and touch the sky. Enchanting and charming, the village truly is the stuff of fairy tales and casts a spell over all those who have the chance to visit.

There’s also the village of Cabrerets, in an impressive cliff side setting and the spot where you can visit the Pech Merle caves, one of the very few caves in France with prehistoric paintings that remains open to the public

Not listed as a Plus Bleaux Village but certainly not to be missed is the stunning village of Rocamadour. The village is on the Saint-Jacques pilgrimage route and visitors come to see the statues of the Black Virgin and the tomb on Saint-Armadour. Walking the patchwork of alleyways of this ancient pilgrimage site is magical.

The towns of Figeac and Gourdon are also worth a visit. The historic gem of Figeac has small, pretty palaces dating back between the 13th-16th centuries which are a wonder to see. While in Gourdon admire the yellow stone properties that dot the town, walk the ramparts of the former fortified castle, shop for local delicacies at the town’s frequent street markets and visit the world famous Cougnac’s cave.

Things to do in Lot

The south-east of the department follows the meandering Lot Valley between Figeac and Cahors, and largely forms part of the Regional Natural Park of the Causses de Quercy. Also the Regional National Park of Causses, stretching over 97 towns, boasts a varied landscape including caves, abysses and underground rivers to explore.

The vast lush countryside is perfect for nature lovers and water sport enthusiasts. Outdoor activities popular in Lot include hiking, mountain biking, climbing, horse riding and golf. In the summer, the River Lot, partly running through Lot Valley, is frequently full with people canoeing and kayaking.

Wine lovers rejoice, the vineyards in and around Cahors produce large quantities of internationally renowned red wine (often called black wine) with the dominant variety being the Malbec. Other regional dishes include foie gras and mique, a soft, bread-like substance made with milk, eggs and duck fat.

The department of Lot is becoming increasingly popular with Brits due to affordable property, the relaxed pace of life and the beautiful scenery and features that can be admired in the department’s town and villages.

The typical property styles found in Lot include Quercy houses, rectangular shaped properties holding a chimney, a long façade wall, shed dormers, covered terrace and a pigeonnier (dovecote) and some may have a swimming pool. There are also bastide houses, charming and attractive properties with exposed stone brickwork, character features and shutters, buried in the department’s countryside.

You can find properties in Lot for sale on the France Property Shop website.

Previous Article April 2017 issue of Living France out now!
Next Article How moving to France made us reality TV stars