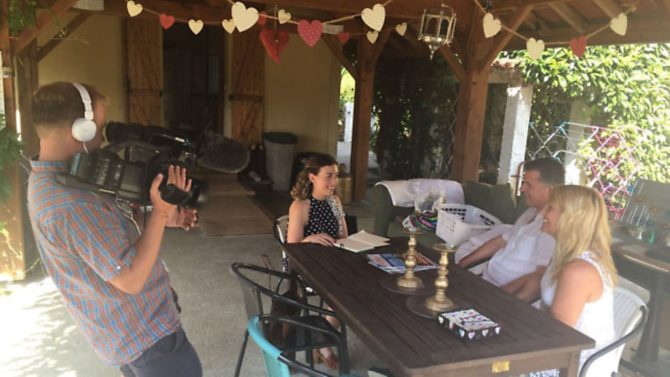 Stars of the Channel 4 series, A New Life in the Sun, Lyndsay and Richard Watterson, took a break from their filming schedule to reveal how setting up a gîte business in France made them stars of the screen…

How did you get involved with the TV show?

Richard: The production company had an advert on their Facebook page, looking for people that were moving to France or Spain who would be renovating properties etc; basically doing the same thing that we were. So it was me who approached them.

A New Life in the Sun is centred on how you set up a gîte business in Gers. What else can viewers expect?

Lyndsay: There’s everything. There’s arguing, bickering, there’s him shouting at me, there’s tears along the way, there’s all sorts. It’s just about life. We don’t create situations, none of it is scripted. We’d maybe do something and the cameraman will say ‘can you do it again?’ There’s nothing fake about it. It’s all been real. And it’s been very, very real. It’s been very personal.

Why did you want to move to France?

R: We wanted a change of pace. I had been in the army for 28 years and I had moved once too often. I think with the last job I just didn’t want to go and then I met Lyndsay who wanted to move to France and I thought, ‘Why not?’

L: It was literally just like that, it’s entirely my fault! Moving to France has been my dream since I was about 13. I just never met anyone to do it with until now.

An interview with stars of Escape to the Château

We cooked for a TV chef at our French B&B

L: I’ve been an amputee for seven years now and I know I’ve only got so many mobile years left. This is one of the things that I wanted to do and there’s no point sitting around until I’m 65 thinking, ‘Oh now it’s time to retire to France’ because by then I could be in a worse state than I am now.

Why did you choose Gers?

R: We wanted to be able to travel to different places in Europe. Here we’re not far from Spain, and we’re close to lovely towns in France. You can also easily go off to ski and have nice trips at the weekend. It was all to do with skiing, really, so it was either going to be within driving distance from the Pyrénées or the Alps.

How did you find the property?

L: We travelled out to the area in Easter of 2016, to look at properties and this was one of the last that we looked at. The dog wouldn’t get back into the car. He found himself a spot by the back door and he wouldn’t move. He still sits there now.

The series shows you undertaking a lot of DIY work on the property. How did you find that side of things?

R: It was a lot of work but I got a real kick out of it. It was great fun to do and there was a real sense of achievement.

L: I don’t know how on earth Richard did it… it just amazes me, even now. I still think we had elves in overnight!

What’s your favourite thing about life in France?

L: We just love being together and being able to have a challenge to work at together. I also love the open space we have here, it’s unbelievable.

What has been your biggest challenge since moving?

L: At Christmas my prosthetic leg started to stop fitting. As soon as we arrived here I was unable to walk and I spent five months sat in my wheelchair whilst I waited for a new leg. For me the hardest part was not being able to contribute as much as we’d planned. Suddenly, a lot was transferred on to Richard, and I found that hard.

Has moving to France taught you anything?