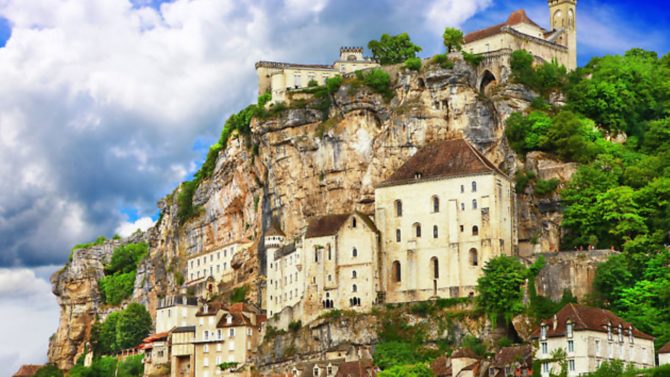 The restructuring of France’s regions in January 2016 meant that the former regions of Languedoc-Roussillon and Midi-Pyrénées were merged together to form a new super region that covers a large part of southern France, including a section of Mediterranean coastline and part of the Pyrénées mountains. The French government is still debating the name of this new region so it is currently called Languedoc-Roussillon-Midi-Pyrénées.

This region is popular with holidaymakers and expats who are drawn to the sunny climate, pretty towns and villages, rolling countryside and vineyards and Mediterranean beaches.

The countryside varies from the Pyrénées mountains, Mediterranean beaches, the marshy Camargue and the Cévennes mountains. The beaches are quieter than there counterparts along the Rivera so are popular with families and the region includes two popular UNESCO World Heritage sites – the medieval cité of Carcassonne and the Canal du Midi. There are also several major towns in Languedoc-Roussillon-Midi-Pyrénées – Toulouse, Montpellier and Perpignan.

Lozère in the north of the region is one of the least populated departments in France and is full of natural wonders including the Aubrac Plateau, Cévennes and the Tarn Gorges. The capital is Mende.

Gard has plenty of Roman heritage to discover including the Pont du Gard and the capital Nîmes.

Hérault has a number of popular beaches on its Mediterranean coastline and the capital is the bustling city of Montpellier.

Aude is home to two UNESCO World Heritage Sites including the capital Carcassonne.

Pyrénées-Orientales is the most southerly department in mainland France and is part of the former Catalonia principality. It has spectacular scenery and the capital is Perpignan.

Ariège is nestled in the Pyrénées mountains and is largely rural and sparsely populated. The capital is Foix.

Haute-Garonne borders Spain via the Pyrénées and has pretty spa towns and ski resorts. The capital is the city of Toulouse.

Hautes-Pyrénées also borders Spain via the Pyrénees mountain range and has the pilgrim town of Lourdes. The capital is the historic town of Tarbes.

Gers is often referred to as Gascony and has a number of pretty bastide towns including the capital, Auch.

Tarn-et-Garonne is one of the smallest departments in France and boasts spectacular landscapes from fertile plains to steep forges. The capital is Montauban, one of the oldest bastide towns in southern France.

Tarn is home to a number of fortified historic villages and the capital city Albi is an UNESCO World Heritage Site.

Aveyron is a rural department full of bastide towns and quaint villages. The capital is the pretty city of Rodez.

Lot neighbours Dordogne and is similarly packed with beautiful towns and villages including the famous Rocamadour. The capital is Cahors.

Plane: The main airport in Languedoc-Roussillon-Midi-Pyrénées is Toulouse International Airport which has regular flights from London and regional UK airports all year round. Other airports in the region with flights from the UK are Lourdes, Carcassonne, Perpignan, Béziers, Montpellier and Nîmes. Marseille airport is just across the border.

Train: There is a TGV line from Paris to Perpignan via Montpellier and from Paris to Toulouse via Bordeaux. They both take around five and a half hours.

Car: You can follow the autoroutes from Paris to Toulouse and Montpellier.

Places to visit in Languedoc-Roussillon-Midi-Pyrénées

The fairy-tale walled cité of Carcassonne is instantly recognisable and one of France’s most visited attractions. Reputedly the inspiration for Walt Disney’s Sleeping Beauty, Carcassonne was restored by Viollet-le-Duc in 1853 and is now an UNESCO World Heritage site. Across the river from the cité is the ville basse where the majority of the town’s inhabitants live.

The vibrant city of Toulouse is the largest city in Languedoc-Roussillon-Midi-Pyrénées and has a large student population and a stong aviation industry. Toulouse is known as la ville rose because of its pink-coloured architecture. The centre is framed by the Canal du Midi and the St-Sernin cathedral is considered to be one of the finest Romanesque buildings in the world.

Montpellier is one of the largest cities along the Mediterranean coast and also has a large student population who attend Montpellier university, one of the oldest in the world. The Place de la Comédie, Jardin des Plantes and the elegant 18th-century hôtels particuliers are not to be missed.

The Episcopal city of Albi is an UNESCO World Heritage Site and home to the huge brick cathedral of Ste-Cécile, the Berbie Palace and the oldest bridge in France, dating back to 1040.

Rodez is the capital of Aveyron and boasts the towering Cathédrale Notre-Dame, a lively Saturday morning market and the recently opened Musée Soulages which exhibits the work of Rodez-born artists Pierre Soulages.

The town of Perpignan was once Catalonia’s second city after Barcelona and it still feels more Spanish or Catalan than it does French.

Part of the region enjoys a Mediterranean coastline with popular resort towns, including the port of Sète with its lively water-jousting tournaments, La Grande Motte and Le Grau du Roi. The stretch of Mediterranean coast which joins the Spanish border is called the Côte Vermeille and includes the stunning beaches of Argelès-sur-Mer, Banyuls-sur-Mer and Collioure.

The region of Languedoc-Roussillon-Midi-Pyrénées boasts no less than 43 of the Plus Beaux Villages de France (the most beautiful villages in France). Some of the best ones to visit are Najac, set on a rocky ridge above the River Aveyron, medieval Lagrasse, Aiguèze overlooking the Ardèche gordes, Villefranche-de-Conflent, fortified by the famous French military engineer Vauban, Carennac and Estaing, both on the banks of the River Lot.

Another Plus Beaux Village to visit is Conques which has been a major stopping point on the Saint-Jacques pilgrimage route since the 12th century. The pilgrims and hikers come to see the Abbaye Sainte-Foy and Pont des Pèlerins. Although not a Plus Beaux Village, Rocamadour in Lot is not to be missed. Built into the rock of a sheer cliff, Rocamadour is also on the Saint-Jacques pilgrimage route and visitors come to see the status of the Black Virgin and the tomb of Saint-Amadour.

A great example of the medieval bastide villages that characterise the former region of Midi-Pyrénees is Cordes-sur-Ciel. Perched on a hillside, Cordes-sur-Ciel boasts cobbled streets, artisan shops and fabulous views. More of a town the a village, Uzès is still worth a visit for its pretty medieval bell tower, castle, Place aux Herbes and colourful markets, as is Pézanas, a medieval village with Renaissance mansions and a 14th-century Jewish ghetto.

The Saint-Jacques isn’t the only pilgrimage route in this region, the sanctuary at Lourdes draws thousands of people every year who make the pilgrimage to Lourdes in the foothills of the Pyrénées.

In Roman times one of the most important towns in the area was Narbonne, the capital of Gaul. It was a prosperous port at the crossroads between Aquitaine, Italy and Spain and you can still see Roman influences in the uncovered Via Domitia road and the Horreum subterranean galleries. Narbonne’s other claim to fame is as the birthplace of legendary French singer Charles Trenet and you can visit his former home. Nîmes was also an important town during the Roman times and now boasts some of the best examples of Roman architecture including Les Arènes amphitheatre and the Maison Carrée temple. Nimes was also the birthplace of denim – the word coming from ‘serge de Nîmes’. The spectacular Roman aqueduct the Pont du Gard is just outside Nîmes and is one of France’s most visited attractions. You can explore on foot or in a kayak.

Things to do in Languedoc-Roussillon-Midi-Pyrénées

The region of Languedoc-Roussillon-Midi-Pyrénées was settled by the Romans and you can see evidence of their civilisation in Narbonne, Nîmes and the Pont du Gard. Continuing your historical tour you can visit the hilltop castles in Aude where the Cathars sought refuge from persecution in the Middle Ages. Some are now ruins but have fabulous views of the countryside. Try Château de Quéribus or Château de Montségur.

The Pyrénees mountains offer a quieter and cheaper alternative to the Alps in winter with a number of ski resorts and also popular with hikers in summer. There are a number of spa towns in the Pyrénees, the best known is probably Bagnères-de-Luchon celebrated for its thermal springs and now a fashionable resort.

To the north of the region is the Aubrac Plateau, another area popular with walkers. During the transhumance festivities in May and October you can watch farmers lead their decorated cow herds to new pastures. If you enjoy walking, then join others in walking the Saint-Jacques de Compostelle pilgrim route which passes through Languedoc-Roussillon-Midi-Pyrénées, including the villages of Rocamadour, Conques and Cahors, just to name a few.

The Cévennes national park is an area of outstanding natural beauty with a landscape of pastures, forests and mountains. Further south is the area known as the Camargue, an expanse of marshes, lakes and canals home to pink flamingos, white horse and black bulls.

The UNESCO World Heritage Site of the Canal du Midi runs from Marseillan near Sète to Toulouse where it joins the Canal de Garonne. This breathtakingly beautiful canal is popular with boaters and cyclists and is a great way to see the region.

The Tour de France route often passes through this region and there are numerous cycle paths to follow whether you would like a challenge like the Col du Tourmalet or a gentle meander along the Canal du Midi or through the Tarn Valley.

A must-do in Languedoc-Roussillon-Midi-Pyrénées is to drive along the Millau viaduct, the tallest bridge in world that links Clermont-Ferrand in Auvergne-Rhône-Alpes to Béziers and Narbonne along the A75.

There are plenty of vineyards in Languedoc-Roussillon-Midi-Pyrénées and so you have plenty of choice including wine from the Corbières, the Minervois and Gallic wines. Limoux produces a good sparkling wine called Crémant de Limoux, and legend has it that the secret of the sparkling wine was smuggled back to Champagne by Dom Pérignon. In terms of food specialities from Languedoc-Roussillon-Midi-Pyrénées you can choose from aligot – a hearty dish of potatoes, cheese, garlic, cream and butter – foie gras, cassoulet which the town of Castelnaudry claims to have invented and Roquefort cheese.

As with most of France, the more expensive areas to buy property in Languedoc-Roussillon-Midi-Pyrénées are near the coast and big towns and popular tourist villages. As a whole property prices in the region are higher than the national average (€158,000) although they vary considerably throughout the region.

Languedoc-Roussillon-Midi-Pyrénées is a large and diverse region and so property styles vary considerably depending on where you are buying. In the Pyrénées mountains you will find mountain chalets and farmhouses while along the Mediterranean coast can buy villas with pools and colourful townhouses with courtyards and rooftop terraces. Other popular property styles in Languedoc-Roussillon-Midi-Pyrénées are spacious mas farmhouses, stone bastide village houses, converted watermills, properties with pigeonniers, maisons vigneronnes and maisons de maîtres.