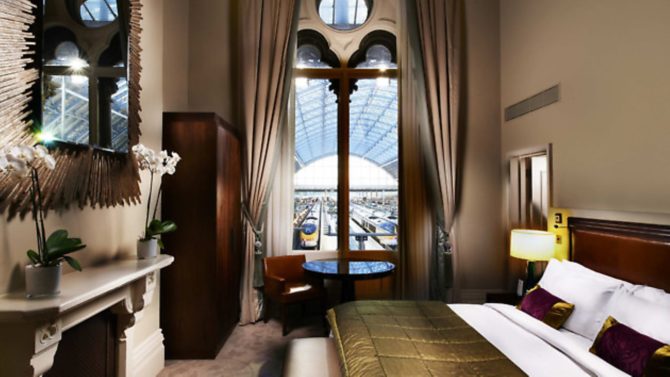 Perfectly located for those taking the Eurostar to France, St Pancras Renaissance Hotel in London has a fascinating history

It can be all too easy to hurry through London en route to the Eurostar terminal at St Pancras, peering fleetingly up at the grand facade of the Renaissance St Pancras hotel as you go. Yet those who linger a little longer, even booking an overnight stay for an early train, will enjoy a travel experience in its own right. Celebrating its fifth anniversary this year, the St Pancras Renaissance has a fascinating tale to tell about rail travel past and present.

The Midland Grand Hotel opened in 1873 after the then Midland Railway wanted a terminus for its own new line into the capital, and Sir George Gilbert Scott came up with an audacious design for a cutting-edge hotel on the site, featuring such mod-cons as flushing toilets and a call-bell system. Sadly, by the 1920s it was considered old hat (other newer hotels offered en suites and other mod cons) and, after year-on-year losses, it closed in 1935. In the ensuing years, it lay empty, was used for offices and, in 1967, was rescued from demolition by Sir John Betjeman, who succeeded in getting it Grade 1 listed. It was also used for film and TV shoots, among the most famous being the backdrop for the Spice Girls’ debut music video for Wannabe in 1996.

What visitors and guests see today is a splendid reincarnation of its former glory. The majority of its rooms are based in the Barlow Wing, but for those who want to soak up the atmosphere and history of the hotel, the Chambers Suites are the rooms to book, especially for those who aren’t in a hurry to board the train.

I checked in at the desk in the buzzing atrium at the centre of the hotel – where once coaches and horses dropped off passengers and luggage, and now business meetings and social gatherings take place. After that, I was welcomed into the Chambers Club, a private lounge available to guests of the suites, where tea, coffee and snacks are served free of charge. It’s a good, quiet place to work (or bring a guest), that is if you can resist the lure of the hotel’s spa, swimming pool and steam room.

A separate staircase from the club leads up to the magnificent corridors that lead between the suites. Even before entering one’s room, this side of the hotel is like a museum piece. Back in 1873, Gilbert Scott’s designs, including Gothic fanlights above each door, 18ft ceilings, ornate stencilling and flamboyant wallpapers, were created to impress, and today’s incarnation is just as awe-inspiring. The pièce de résistance both then and now is the Grand Staircase – a sweeping double stairway with wrought-iron balustrades that climbs up three floors under an amazing vaulted ceiling. The floor tiles at the foot of the staircase are stunning, and work in harmony with the patterned carpet that climbs the stairs. At the top, the Ladies’ Smoking Room was once the height of modernity, offering the first place that women could legally smoke in public. These days it is a stunning reception room, with a sunny terrace overlooking London.

The bedroom are suitably grand, too; even my junior suite (the smallest available) was spacious, with the sun flooding through the huge windows and a large elegant fireplace. The en suite was cleverly tucked behind the back wall on a higher floor level so that it enjoyed a lower ceiling than the room itself. My main concern, however, was the traffic noise outside, and while it was fairly loud in the evening, overnight it was quiet enough to enjoy a sound night’s sleep in the huge, comfortable bed. After breakfast in the Chambers Club, it was time to pack up and head to the train, and if there hadn’t been the joy of arriving in France ahead of me, it would have been very hard indeed to leave.

Stay in a treehouse in France