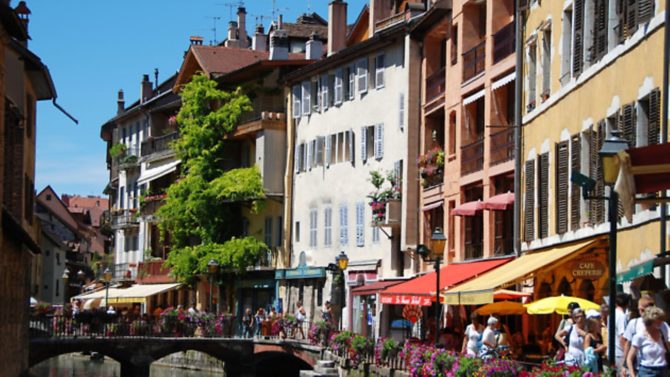 In January 2016 France’s regions were reduced from 22 to 13 and the two regions of Auvergne and Rhône-Alpes in the south-east of France were merged to form one region, currently called Auvergne-Rhône-Alpes. This region stretches from the Swiss and Italian border to the centre of France.

This region now includes the world-famous Alps mountain range and the less well-known Massif Central, as well as the vineyards of the Rhône Valley, the lavender fields of northern Provence and the iconic extinct volcanoes of Auvergne. Parts of the region, especially the Alps, are very popular with tourists, property buyers and expats while other areas remain undiscovered.

As well as rolling countryside and mountains, Auvergne-Rhône-Alpes has a few large cities including gastronomic capital Lyon, Grenoble, Annecy and Clermont-Ferrand. The weather varies considerably. The Alps are covered in snow from late December until May but during the summer the region is sunny and warm, especially in the south.

Allier is the northernmost department in the region and is famous for its spa towns including vichy. The capital is Moulins.

Cantal is located on the edge of the Massif Central and is home to several of the iconic Auvergne volcanoes. The capital is Aurillac.

Haute-Loire is a mostly rural department with a third of its land a forest. The capital is Le Puy en Velay known for its religious heritage.

Puy-de-Dôme is named for the extinct volcano in the department in the heart of the Massif Central. The capital is Clermont-Ferrand.

Ain is in the north of the region, sharing a border with Switzerland. The department is largely rural with the Jura mountains and plains of Dombes. The capital is Bourg-en-Bresse.

Rhône is home to vineyards and rolling hills. The capital is Lyon, France’s third biggest city and a UNESCO World Heritage Site.

Loire is a largely rural department with a wide variety of landscapes and a few large towns. The capital is St-Étienne.

Haute-Savoie borders Italy and Switzerland and is home to the Mont Blanc mountain range. The capital is the beautiful lakeside town of Annecy.

Savoie is where you will find many of the popular Alpine ski resorts, as well as spa towns and pretty mountain villages. The capital is Chambéry.

Isère is in the heart of the Alps with a number of internationally acclaimed ski resorts. The capital is Grenoble.

Drôme borders Provence-Alpes-Côte d’Azur and has all the charm of rural Provence with its lavender fields, sunflowers, olive groves and vineyards. The capital is Valence.

Ardèche boasts a diverse landscape including the mountains of the Massif Central and Cévennes and the fertile Rhône valley. The capital is Privas.

Plane There are four large international airports offering access the Auvergne-Rhône-Alpes region – Lyon, Grenoble, Chambéry and Geneva just over the border in Switzerland.

Train There is a year-round direct Eurostar route to Lyon and during the winter the Eurostar ski train travels from London-St-Pancras to Aime, Moûtiers and Bourg-St-Maurice. There are TGV services to Valence, Clermont-Ferrand and Grenoble.

Car The region is well connected with autoroutes from Paris and the ferry ports. Calais to Lyon takes around 7 hours and to Clermont-Ferrand is around 6 and a half hours.

Places to visit in Auvergne-Rhône-Alpes

The third largest city in France, Lyon sits at the confluence of the Saône and Rhône rivers and is well connected by train and flight routes. The picturesque Vieux-Lyon was once home to the small silk workshops the city was famous for and today is an UNESCO World Heritage Site and the trabours passages are worth exploring. Lyon is known as the gastronomic capital of France so make sure you visit some of the traditional bouchon restaurants or Michelin-starred restaurants.

Lying on the northern tip of Lake Annecy, the town of Annecy is often called the ‘Venice of the Alps’ because of the tributaries which crisscross the old town. A beautiful town, it is popular in both summer and winter. Find out the best ways to explore Annecy

Chambéry lies in an Alpine valley and is close to the ski resorts of the Alps yet benefits from a huge sense of history and culture. It is a peaceful town of cobbled streets and protected buildings, with a busy Saturday morning market.

Known as ‘capital of the Alps’, Grenoble is set against a backdrop of breathtaking mountains and offers access to the Alps. For a breathtaking view ride the cable car from the city to La Bastille fortress overlooking Grenoble.

Clermont-Ferrand stands at the heart of the Puy-de-Dôme department and is one of the oldest cities in France. It gained notoriety as the starting point for the Crusades and is now home to a Gothic cathedral and one of the finest Romanesque churches in the region.

Le-Puy-en-Velay is much visited by modern-day pilgrims walking the Santiago de Compostelle pilgrimage route. As part of the pilgrimage route the Cathédrale Notre-Dame du Puy, perched on a rocky hill, is an UNESCO World Heritage site and the statue of the Virgin Mary also looks down on the town.

Capital of the Ardèche department, Privas is one of the smallest prefectures in France. Surrounded by three rivers, Privas was once a Huguenot stronghold and much of the original town was destroyed during the Wars of Religion. Nowadays it is famous for its marrons glacés (candied chestnuts).

There are a number of Plus Beaux Villages de France (France’s most beautiful villages) in the Auvergne-Rhône-Alpes region. The walled medieval village of Pérouges is a former weavers’ settlement overlooking the Rhône River. Charroux is a fortified village famous for its mustard. Salers has dramatic houses built from black lava stone and St-Flour sits at an altitude of 1,188m. In the Alps are the pretty Alpine village of Bonneval-sur-Arc and Sixt-Fer-à-Cheval with its dramatic waterfall Cascade du Rouget.

The region’s spa towns are home to thermal baths and belle époque architecture. There are three in the department of Allier – Neris-les-Bains, Bourbon l’Archambault and Vichy which was the base of the Vichy government during WWII. Along the banks of Lac du Bourget is the spa town of Aix-les-Bains home to the national thermal baths and the spa town of Évian-les-Bains sits on the bank of Lake Geneva.

Another UNESCO World Heritage Site you will find is the Grotte Chauvet-Pont d’Arc (Chauvet caves). These prehistoric caves contain the oldest-known and best-preserved figurative drawings in the world. A replica has recently opened nearby to allow visitors to explore these prehistoric cave paintings.

Things to do in Auvergne-Rhône-Alpes

The main draw of the Auvergne-Rhône-Alpes region is the Alps mountain range. The Alps is one of the most popular skiing areas in the world and attracts athletes, families and the rich and famous to its resorts. A number have been purpose build for tourism with a vibrant après-ski, but there are also traditional Alpine villages to discover. Some of the most famous ski resorts include Chamonix, Les Gets, Val d’Isère, Val Thorens, Courchevel, Tignes and Morzine, but there are a number of less well-known Alpine ski resorts too. One of Europe’s highest peaks, Mont Blanc is also in the Alps. The Alps are becoming popular in the summer as well with activities such as hiking, mountain biking and even paragliding.

Within the region you will also find the less well known Massif Central and part of the Jura which both offer winter sports away from the crowds.

Auvergne-Rhône-Alpes is perfect for nature-lovers with a number of areas to explore. The Écrins natural regional park has stunning glaciers, the Vercours plateau is an area of steep valleys and gorges, the Parc des Oiseaux is one of the largest bird sanctuaries in Europe and the Vanoise national park was France’s first national park. Not forgetting of course the breathtaking extinct volcanoes of Auvergne. Puy-de-Dôme is the highest volcano (1,456m) and offers a view across 11 departments from the top, while Monts de Cantal and Puy Mary are both popular with hikers.

Cycling is also a popular past time in the region and some of the most challenging climbs of the Tour de France can be found here, including Puy-de-Dôme and Alpe d’Huez.

For those who like watersports there are plenty of options too. Lake Annecy, Lake Bourget and Lake Geneva (also called Lac Léman) are all good place to visit for this along with any of the gorges in the region, including the beautiful Gorges de l’Ardèche – a scenic stretch of river that begins at the village of Vallon-Pont d’Arc and famed for the Pont d’Arc spanning the river.

Hearty food is the regional speciality, most of it involving cheese in some way! Some local specialities found in the mountains include tartiflette, potatoes layered with Réblochon cheese, cream and bacon; raclette, melted cheese and potatoes; truffade, sliced potatoes cooked with cheese and garlic; and cheese fondue. Away from the Alps aligot, creamy mashed potato and cheese, is popular and if often made with Fromage de Cantal AOC cheese. Puy lentils, Charroux mustard and Vichy pastilles are some local specialities you might recognise. Ardèche is the leading chestnut producer in France so make sure you try the marrons glacés if you are in the department.

Part of the famous Rhône valley vineyards lie within the region so make sure you try the local wines. Some vintages to look out for include Hermitage AOC, Côte Rôtie AOC and Côtes du Rhône AOC. In the mountains you will find the liqueur Génépi made from plants. If you’re sticking to non-alcoholic drinks you might recognise a few local brands of bottled water – both Evian and Volvic come from springs in the Auvergne-Rhône-Alpes region.

There are plenty of festivals in the Alps during the ski season, including Rock the Pistes, a series of concerts held on the slopes, and the Grande Odyssée dog sled race. The town of Annonay was where the Montgolfier brothers launched the flight of the first hot-air balloon in 1783 and this event is celebrated with the annual Festival de Montgolfière. If you are in the region for either New Year or Bastille Day, head to Annecy to watch a spectacular fireworks display over the lake.

The former region of Auvergne is often overlooked by British buyers which means it is one of the cheapest areas of France for property buyers – the average property price in Auvergne is just €116,000, ranging from €90,000 in Allier to €152,300 in Puy-de-Dôme. The area is well located offering easy access to Paris, the Riviera and the Alpine ski resorts and it is ideal for nature lovers.

If you are looking for somewhere in the south of France then the department of Drôme could be a good option. Although more expensive, with an average property price of €182,800, it is much cheaper than neighbouring the Provence-Alpes-Côte d’Azur region yet still offers the weather, lavender and sunflower fields and vineyards.

Property styles vary considerably across Auvergne-Rhône-Alpes. In the countryside of the Massif Central you will find large farmhouses with outbuildings and plenty of land, while in the Rhône Valley there are a number of maison vignerons (wine producer’s houses). In the south of the region you will find Provençal villas with coloured walls and dotted across the region are traditional pisé houses where the walls are covered with packed earth.

In the Alps the main property styles are traditional chalets and farmhouses, new-build developments in ski resorts and plenty of apartments. Traditionally most of these are made from wood.

Browse our all our region guides