Explore the Lac du Salagou, a lake like nowhere else in France 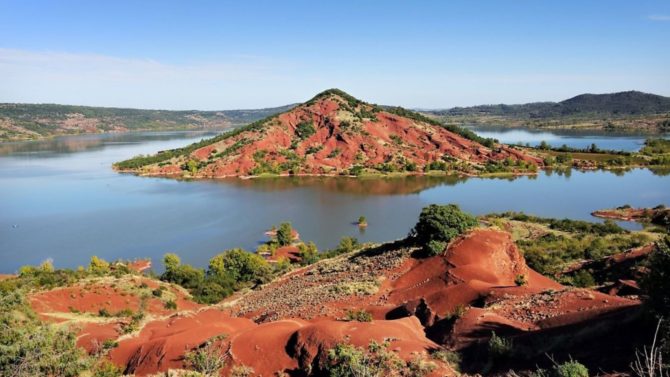 The Lac du Salagou, a ‘Martian marvel’, is like nowhere else in France, or even on Earth, and that’s just the start of what makes it so special

Strictly speaking, the 6.5 km-long Lac du Salagou, at the heart of the Hérault département, is not a lake but a reservoir, created in the late 1960s to mitigate floods and improve local irrigation. But it blends so beautifully into the natural environment you’d never know.

I begin my tour with a walk that takes me along the lakeside past the aquatic activity centre at Vailhés, and I can instantly see why so many make the Martian comparison: I’m surrounded by undulating, rust-red slopes that disappear into the depths of the lake (where the ghostly ruins of a village swallowed up by the reservoir remain). These are what the locals call ‘ruffes’ (Occitan for rouges) and they dominate the landscape as far as the eye can see.

Why is everything so red? It’s a long story stretching back over 250 million years to what geologists call the Permian period. But the key to understanding it is quite simple. Basically the Bassin de Lodève which surrounds Salagou and lies at the Mediterranean end of the Massif Central, held a huge, sedimented layer of iron-rich mud that was increasingly exposed to the elements by erosion and subsidence, causing oxidation.

There are other places, notably Rustrel in Vaucluse, which are similarly reddish in appearance, but none as expansive or with such a rich prehistoric heritage and biodiversity. Hence the area has been protected by the Natura 2000 label and designated a Grand Site of exceptional interest.

Continuing my walk, I begin to feel I’m in an exotic as well as other-worldly location: the crunch of gravel beneath my boots, enormous cacti bursting with maroon-coloured fruit (prickly pears), and frequent examples of ‘desiccation’ – a geological term for cracked patterns in dry soil that, in this instance, look like patches of dragon skin.

Overhead, I spot large birds of prey swirling on the air currents and scanning the ground for their next meal. From a distance, it’s hard to tell whether they’re golden eagles (aigles royaux) or vultures, but both species are a common sight. I also come across wonderful wild irises in yellow and blue, heralding the spring.

Later, I take a moment to admire majestic Mont Liausson on the opposite side of the lake. However, I’m struck by how different (craggy limestone in contrast to ruffes) it looks to the other peaks locally – an important clue, as it turns out, to my next stop.

In dramatic contrast to Salagou barely a stone’s throw away, the Cirque de Mourèze is like walking on the moon. Towering dolomitic rocks have been carved by the hand of time into striking shapes like the evocatively named Sphynx and Demoiselle, and a network of paths surrounding these has turned this natural amphitheatre (the literal meaning of ‘cirque’) into a delightful labyrinth that children and adults alike can enjoy.

Driving through the village of Salasc as I continue my tour, I note how many of its older buildings are a blend of locally sourced sandstone and charcoal-black basalt. The latter reflects the several ‘necks’ and ‘orgues’ I later witness, both of which are vivid testament to the turbulent volcanic activity that further shaped the Salagou landscape aeons ago.

Moments later, I step back in time again to the age of the dinosaurs at the hamlet of La Lieude. Here, a large hangar by the side of the road protects a slope criss-crossed by hundreds of remarkably preserved footprints. These were left by a variety of therapsids – a pre-mammalian species of reptile – and unearthed as recently as the 1980s.

Directly behind the hangar, beneath the mysterious ruins of the Château de Malavielle, I discover more jaw-dropping geology: wave upon wave of ‘millefeuilles’. Technically, these are striated (multi-layered) ruffes that have buckled under enormous tectonic pressure, but the analogy is a valid, as well as endearingly French, one.

Not surprisingly, the extraordinary appeal of the Salagou-Mourèze site draws geologists and palaeontologists from far and wide, as well as naturalists and outdoor activity enthusiasts. But just beyond it, near the winemaking village of Saint-Jean-de-la-Blaquière, there is an equally spectacular spot – the Canyon du Diable (Devil’s Canyon).

Clambering around in this ‘petit Colorado’ as my tour comes to an end, I’m captivated once again by both the marvellous scenery – enhanced by silver-green olive orchards and stone ‘capitelles’ guarding the vines – and the remarkable story behind it. I’m also left in no doubt that the Salagou area as a whole has a unique spirit of place. If you’re lucky enough to visit, you’re sure to be charmed by it too.

No-one has captured the spirit of Salagou better than photographer Georges Souche. His latest book, Planète Salagou, features a stunning collection of photographs with accompanying text (in French) by Jean-Claude Forêt. The book, individual photographs, and calendars can be ordered from georges-souche.com.

The beautiful French mountain lakes you have to visit

Previous Article Ian Moore on the sights and sounds of the French countryside
Next Article Menton Lemons to Mirabelle plums: French fruit and where it grows