Menton Lemons to Mirabelle plums: French fruit and where it grows 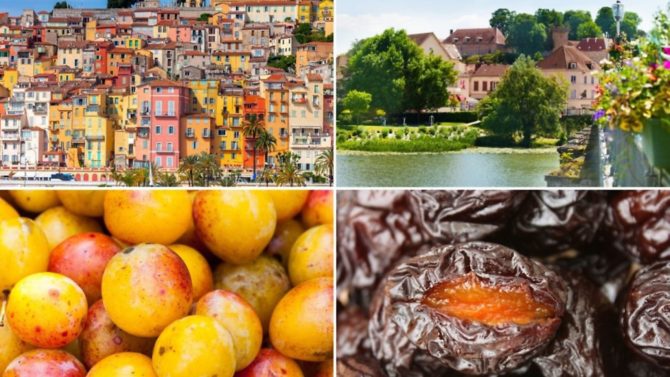 Have you had your five-a-day? We take a look at four of France’s iconic fruits, where they grow, and why you might want to buy a property there.

Lush paysages across France offer more than just a nice view; they are also bountiful in fruit. Festivals celebrate local varieties each year and you only need to find yourself a house with a garden to have a go at growing your own. Plenty of properties even have enough land for an orchard. Let’s explore what’s in France’s regional fruit bowls.

If you like to live life in full colour then Menton may be the place for you. Yellow and pink properties sing of summer and the Alpes-Maritimes department certainly has the hot Mediterranean climate to back that up. Holiday homes in the area come in the form of apartments, townhouses and villas and if you have the right budget a sea view wouldn’t be out of the question.

There certainly is a price tag attached to owning a bolthole on the famous French Riviera, however. According to Notaires de France, the average property price in Menton is €4,470/m².

While you might think a place like this thrives best in summer with an influx of tourists during les grandes vacances, it is actually February when the town is at its liveliest and most vibrant for the annual Fête du Citron when 180 tonnes of citrus fruit and 240,000 annual visitors join together to display a spectacular zest for life. There is music, dancing and a carnival atmosphere on the packed-out streets as complex citrus sculptures inspired by themes such as ‘Under the Sea’ and ‘Broadway’ are paraded through the town, and Menton’s parks and gardens host displays too. Unfortunately, and for obvious reason, crowds have not been able to gather to celebrate for a couple of years, but the event organisers are hoping to return in great style for the 88th festival in 2022.

Why le citron (lemon), you may ask. Legend says that Eve, having taken the fruit from paradise, buried it in the beautiful southern French landscapes that reminded her of Eden and this led to the juicy bright yellow lemon growing in the area that became Menton. Today, the Menton lemon has IGP certification. Cultivated only in authorised groves, the fruits are left to ripen on the tree, are harvested by hand, not coated with wax and sold with one or two leaves attached to guarantee freshness.

Mid-August to mid-September is harvest time in the Agenais area. This is when you get the ripest sweetest plums – the test, apparently, is to shake the tree and if the fruit falls off easily you know they are fully mature. Then the transformation happens; the mauve-blue coloured plums are put on racks in a drying tunnel for 20-24 hours, and emerge as the glossy, almost black, Pruneaux d’agen.

Named after the town of Agen, the prunes are produced across the Lot-et-Garonne department and parts of Gironde, Dordogne and Lot, while the busiest area for the plum orchards and prune production is in the valley around Villeneuve-sur-Lot. The sector generates 10,000 local jobs and produces 42,000 tonnes of IGP-certified prunes a year. In order to officially hold this certification, the prunes must be ‘whole, fleshy, have a wrinkled skin, neither split nor cracked’ and be made from the Ente variety of plum. Rich in fibre and vitamins and easy to store, the prunes were once popular with sailors on long journeys and were widely traded abroad. In the 18th and 19th centuries the prunes were recognised around the globe.

The eponymous Agen in Lot-et-Garonne, “is a lively town with lots of bars and restaurants and fantastic architectural features such as lovely old Haussmannian-style buildings.” says Daniel Taylor, senior sales consultant in the Agen area for Beaux Villages. It is also home to the unusual Pont-Canal d’Agen where the Canal de Garonne has its own aqueduct bridge over the larger River Garonne. With a pavement on either side, it is a popular route for walkers and joggers and offers a lovely view of the river.

“The beautiful Ermitage hills overlooking Agen offer great views and are an ideal location to buy a property,” says Daniel, and a property here is also well placed for access to the rest of south-west France. “The city has easy access to the A62 motorway, which allows you to be in Bordeaux and Toulouse in under an 1h30, and also has easy access to the beach and mountains. It also has fantastic direct railway links to Paris and other major cities in France,” he explains.

The cherry on top

Spring is marked by the blossoming of delicate white and pink flowers in the rural department of Haute-Saône in eastern France.

The second half of April is the best time to see the beautiful display of the cherry trees in full bloom, and the orchards of the Ecomusée du Pays de la Cerise in Fougerolles are a great place to do so. The museum, set in a former 1830s distillery, takes you through two centuries of Fougerollaise life and celebrates the town’s cherries and the Kirsch liqueur made from them that brought business and growth to the area. Sweet, juicy and fragrant with large stones, the cherries are harvested from mid-June to mid-July and, while many will go to the distillers, local residents today will also use them in pies, jams and syrups.

Cherries aren’t the only fruit to grow in the department however; apples, pears, plums, and figs also flourish in the same climate as cherries, according to Ido Bakker, an estate agent at Leggett Immobilier. “Most people (ourselves included) have several fruit trees in the garden,” says Ido. “As Haute-Saône is a rural area, many of the houses which are up for sale are old farmhouses in need of some TLC, but we also have some prestige properties with large grounds.”

Located in Burgundy-Franche-Comté, Haute-Saône has the city of Dijon to the west and the German and Swiss borders (and Basel airport) less than two hours’ drive to the east. In the north of the department, you enter into the Parc naturel régional des Ballons des Vosges which offers beautiful landscapes for an invigorating hike. One of the smaller mountain ranges in France (the highest peak is the 1,424m summit of the Grand Ballon), it offers plenty of walks that are not too challenging, making it perfect for families.

The area is ideal for those wanting a slow pace of life or looking for a property on a budget. “Haute-Saône has not yet been discovered by mass tourism so it is relatively quiet here and the property prices are among the lowest in France,” says Ido. Notaires de France put the average property price in the area at €950/m².

Lorraine and its plums are close-knit companions. While Mirabelle plums do grow elsewhere, more than 70% of the worldwide production occurs in the former Lorraine region, made up of the Meurthe-et-Moselle, Meuse, Moselle and Vosges departments, which are now encompassed within the Grand Est region.

The local clay soil, which holds water well, along with the warm climate with alternating hot days and cold nights are optimal conditions for the sweet and juicy yellow plum. There are hundreds of thousands of Mirabelle plum trees planted in orchards across the region, some of which can be seen interspersed with vineyards along the Meuse river. Pilgrimage destination Sion hill, site of the Notre-Dame-de-Sion Basilica in Meurthe-et-Moselle, is also a great spot to take in the fruitful landscapes and the ridges of the Vosges Mountains.

Delicious eaten as they are, the plums can also be made into jam, baked in tarts or distilled into an eau de vie brandy. The Maison de la Mirabelle in Rozelieures, where the Grallet-Dupic family have owned plum orchards for five generations, is the place to go to learn more about the fruit and the tipples made from it.

Of the four departments in Lorraine, you will find the cheapest properties in Meuse where the average house price is €870/m², according to Notaires de France. The most expensive are found in Moselle, where there is an average property price of €1,820/m², although there is quite a contrast between the prices in the western half of the department surrounding the city of Metz, and the cheaper eastern half. Each year in August, Metz is host to the Mirabelle festival where locals celebrate the golden fruit with food markets, concerts, a parade and the election of a Mirabelle Queen.

Over in Meurthe-et-Moselle, the city of Nancy is home to the Palace of the Dukes of Lorraine and the iconic gilded wrought-iron gates and ornate fountains on Place Stanislas. A property in this culturally rich city would cost you an average of €2,000/m² but could bear fruit as a holiday let for visitors wanting a taste of the region.

Previous Article Explore the Lac du Salagou, a lake like nowhere else in France
Next Article Quiz: French Fact or Fallacy, True or False