Island paradise: Why you should visit Vendée’s Île d’Yeu and Noirmoutier 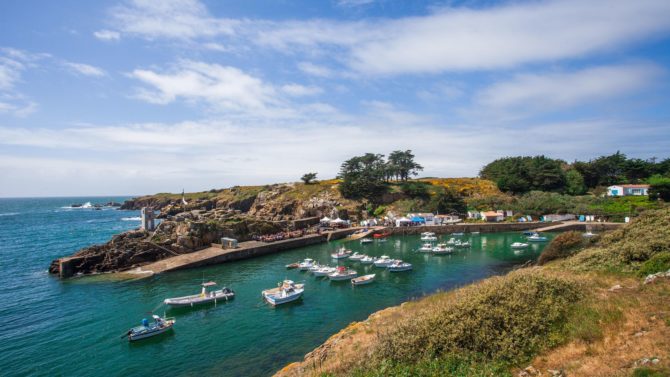 If you’re lured by the thought of sand dunes, shellfish and the whip of the Atlantic breeze on a summer’s evening, but put off by hordes of Brits heading to Île de Ré, choose these islands instead.

The Île d’Yeu and Noirmoutier offer everything the Île de Ré does – beaches, fine food and adventure – but are much friendlier on the budget.

Both islands are situated off the coast of La Vendée, starting point of the famous round-the-world solo yacht race. While the Île d’Yeu is reached by ferry, Noirmoutier is a “presqu’île” joined to the mainland by a road bridge, and a natural causeway, the Passage du Gois, that can only be crossed at low tide.

The Île d’Yeu’s remoteness means the ideal destination for parents who want to let their children run a little wild and experience a cycling holiday for the first time. The island has been inhabited since Neolithic times – there are dolmens and menhirs scattered around – and, despite its tiny size, has seen a lot of action.

In the 6th century, Irish monks set up home here, before being ousted by Vikings and during the Hundred Years’ War it was attacked by the English who ruled for 37 years. Inevitably, fishing became the island’s main source of income, with islanders living in simple one or two-storey cottages. While property prices are rising thanks to in-the-know Parisians snapping up these houses as second homes, Yeu remains much less chi-chi than its more famous island neighbour.

The ferry arrives in the capital of Port-Joinville. It’s only 45 minutes from the mainland, but as soon as you step off, it feels like you are further away than France. The quaint whitewashed buildings, coloured shutters and red-tile roofs unmistakably say “seaside town”, but one that’s got more in common with the French West Indies than Saint-Tropez. The battered bagnoles add to an impression you’ve travelled back in time too – you’re much more likely to see an old Renault 4 or cult Citroen Méharis than a sports car.

It’s the same with the clothing worn by islanders and visitors alike – nothing too flashy for a night out here, but rather ancient sailing garb, faded red trousers or denims with a cosy sweater to ward off the night-time chill.

When we visit with our children in May half term, we see two facets of the island: the earlier part of the week quiet and laid-back, with deserted beaches, the second buzzing with French holidaymakers keen to make the most of ‘Le Pont’ on Ascension weekend.

The best way to explore is by bike – no need to bring a car – with rental shops on the corner of most streets in Port-Joinville. Many visitors come for the day, and while the circuit of 28km is doable in that time, you need longer to truly experience the delights of the island.

Leaving the main town, our first expedition takes us past a stretch of beaches, including the Plage de la Grande Conche, leading to the charming lighthouse at Point des Corbeaux. Here, the tree-lined bays are wider and more open, and perfect for a spot of sunbathing on a still day. Around the point, the landscape gets wilder and rockier. The croissant-shaped Plage des Vieilles has interesting nooks and crannies to explore, and if you venture into the sea in a kayak like we did, it’s a good way to explore sandy coves that are harder to get to from land – or known only to locals!

You could happily while away hours exploring the small cycle tracks that lead from the coastal road, but the two main highlights from here are the charming Port de la Meule and Le Vieux Château beyond.

Any keen Tintin fan will immediately notice a resemblance between this castle, built at the start of the Hundred Years’ War, and the illustration on the front of Hergé’s The Black Island. That alone makes it worth visiting, but for children it embodies everything a castle should: turrets, passageways, bridges, the lot. They can even dress up as an English soldier to carry out an attack.

Similarly engaging for children is a visit to the Le Grand Phare, a striking modernist lighthouse which replaced one destroyed by occupying Germans in 1944. There is a testing climb up the vertiginous spiral stairway to the top, where there are spectacular views over the island.

Although there are rentals in La Meule and Saint-Saveur, the picturesque former capital, Port-Joinville is the best place to be based for easy access to seafood restaurants and evening ambience. There’s a busy market during the day – good for stocking up on the island’s famous prune tart and for picnics – and in the evening a wide selection of bars that look out over the harbour, perfect for a cocktail at sundown.

It’s hard not to leave Île D’Yeu without checking out a few estate agent boards: it’s the kind of place you’ll want to revisit time and again.

Both Yeu and Noirmoutier make the most of their YE and NO maritime abbreviations and you’ll see them everywhere, on drying up cloths, posters, mugs and bottle openers. No doubt there’s some rivalry between the two destinations but despite their similar architecture, both have very different vibes.

Inevitably, Noirmoutier feels busier. Unless you head right for the upper reaches of the island, a holiday here is less about getting away from it all and more about indulgence. Plus, it’s easily accessible from Nantes airport if you want to whisk your partner away for a long weekend of gourmet seafood and romantic walks among the sand dunes.

The first part of the island, Barbâtre is the least appealing on first sight, although away from the main road, behind the forest, there’s 7km of fine beach. Most visitors head further north, where Noirmoutier is divided in two by acres of salt marshes. To the west there’s the town of L’Épine and miles of shingle and sand which runs alongside the Bois des Eloux, and to the east, the town of Noirmoutier-en-L’île and the unspoilt fin-de-siècle resorts beyond the Bois de la Chaise.

Like Yeu, the island was the scene of many invasions, from the English to the Dutch. But the salt industry has been constant since the first monks arrived in the fifth century, and turned the wetlands into salt farms, and has provided income for islanders since.

There can be a lot of traffic on Noirmoutier but getting around on bike is easy thanks to three main marked cycle routes. “From Gois to Forests” is a 23.3km tour around Barbâtre, while Marshes to Mills is the best route to take to fit in some oyster-tasting at one of the many shacks dotted around the island, and to experience the salt marshes at close hand. The 18.3km route runs from the village of L’Épine, past the famous Four Court Mills in La Guérinière (there are windmills dotted all over the island) and along the length of the Bois des Eloux.

Our hotel is on the third route, “From Beaches to Harbours”, which takes cyclists from Noirmoutier-en-l’île through the woods, along the coast to the port, and back via the salt marsh.

Sightseeing by bike is one thing, but it’s even better by boat. Joël Léauté offers trips in his traditional wooden boat from the L’Estacade, a pier next to the Plage des Dames. From the water, you can see the authentic 19th century beach huts sitting on stilts on the sand, constructed for the grand residents of the huge villas that were built in the forest during the same era. It’s not hard to imagine the beau-monde dipping their feet into the sparking waters here and on the neighbouring, more intimate cove of L’Anse Rouge.

More striking mansions rear up out of the forest as we sail up the coast, until we reach the Plage de Mardi Gras next to the windy streets of the village of Le Vieil. It’s the place to stay if you are kind enough to let your kids come with you on your weekend break. Charming cottages crowd right up to the beach, so it’s easy to keep an eye on toddlers playing on the sand. If you make it this far, the pizzas at Le Chat Perché are worth a try.

You could spend the best part of a week in Noirmoutier just getting acquainted with the different beaches – there’s one to suit every mood, or type of activity. But there is also plenty on offer, including fine dining, in the main town as well – not least the extraordinarily busy market in Place de la Republique, which takes place every Friday throughout the year and on Tuesdays and Sundays in the summer.

It’s a good place to stock up on all varieties of salt, including the finest fleur de sel, the “nectar of the marshes”, which crystallizes on the surface of the water. You might also wonder why some of the potatoes are so expensive. The climate suits spud-growing, and the Bonnotte variety is only grown in Noirmoutier, accounting for just 100 out of every 10,000 potatoes produced on the island. They are delicious eaten with freshly caught sardines at one of the many restaurants in the town’s bustling streets (or in the port of L’Herbaudière, where you can watch the sun set over the fishing boats).

No trip to the town is complete without a visit to the 12th-century château that towers over the buildings around it, and is one of the best-preserved castles in Western France. It houses a museum which tells the history of the island, and offers spectacular views over the whole of Noirmoutier. It’s not quite as romantic as Yeu’s Vieux Château, but it certainly gives it a run for its money.

For oyster-tasting, head to one of the many shacks close to Bonhomme Oyster Port, where the shellfish are brought in. There are a variety of oysters to choose from, each renowned for their delicate flavour – and the island is also famous for its particularly plump mussels. Both are delicious washed down with a glass of white.

If you plan ahead the best way to leave Noirmoutier is via the Passage du Gois – ideally at sunset or sunrise – so you can experience the unique feeling of driving through the middle of an ocean. It’s the site of an annual running race, les Foulées du Gois, where athletes attempt a round trip of 8.3km and often end up with the sea lapping at their ankles.

The journey is somewhat safer in a car, and with a 90-minute window both sides of low tide to make the 4.2km crossing, it makes for a spectacular way to end a holiday.

How to get to the Île d’Yeu and Noirmoutier

For both islands, fly to Nantes-Atlantique with easyJet from £70 return. We hired a car with avis.fr, and there are also bus services to Noirmoutier and Fromentine, where we caught a ferry to Île d’Yeu. Book in advance at Yeu Continent Compagnie (compagnie-yeu-continent.fr).

Previous Article I have a holiday home in France – do I need a French mobile number?
Next Article Regional Architecture: The stepped-gables of the Vercors and their history