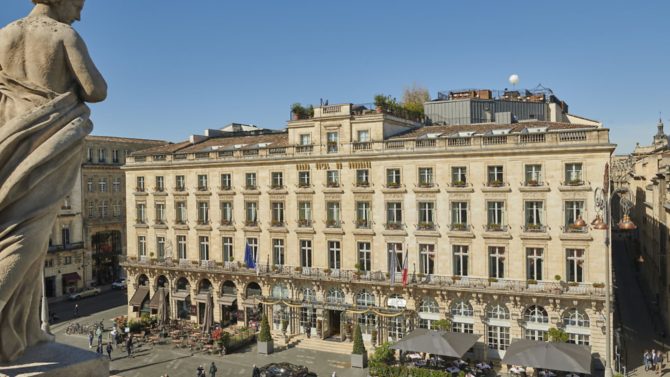 The best French theme park, resort, boutique and city hotels have been unveiled from Paris to Provence

France’s leading hotels, resorts and tour operators have been crowned following a year’s search for the world’s top travel and tourism destinations.

The World Travel Awards, which recognise and reward excellence in travel and tourism, has announced its Europe 2020 winners which include Disneyland Paris as Europe’s Leading Theme Park Resort; DFDS, which operates ferries from Dover to Calais, as Europe’s Leading Ferry Operator and Hilton Hotels & Resorts as Europe’s Leading Hotel Brand, with many other hotels in France singled out for success too.

Nostalgic French décor and UNESCO World Heritage architecture set the scene at this hotel in Bordeaux, with classic rooms decorated with tasteful, 19th-century furnishings and executive rooms boasting marble bathrooms with heated floors. The hotel, which has won the award for the second year running, has a gourmet restaurant inspired by Gordon Ramsay, as well as an indoor swimming pool and Guerlain Spa.

Hôtel Crillon le Brave is a 5-star hotel in the heart of Vaucluse, Provence, surrounded by beautiful scenery, vineyards and olive trees. The hotel consists of 10 ancient houses, with 16 rooms and 18 suites decorated with antique furniture and carefully selected artefacts. Produce from Provence’s markets is given pride of place on the menus of its two restaurants – La Madeleine gastronomic restaurant which serves Mediterranean-style cuisine and relaxed La Table du Ventoux.

This prestigious Parisian hotel in Avenue Hoche is devoted to modern art and even has its own art concierge. Within its walls you’ll find a bookshop, private cinema, contemporary art gallery and a private art collection consisting of over 300 works. Its rooms and suites are the epitome of Parisian chic and there are four restaurants to choose from, offering everything from Peruvian-Japanese to Italian cuisine.

Situated in Avenue Kléber, The Peninsula is in the heart of the French capital within walking distance of some of the world’s most famous monuments, museums and shopping districts. The hotel has 200 luxurious rooms, terraces, gardens and stunning skyline views. Enjoy the Peninsula Afternoon Tea served in The Lobby before taking a dip in the 20m indoor pool.

A French Riviera destination since 1908, Grand-Hôtel du Cap-Ferrat enjoys an enviable location overlooking the Mediterranean Sea. Its luxurious sea-view suites occupy the corners of the hotel’s heritage building with windows looking out to the sparkling sea from two directions. The residential-style suites have a separate living area, king bedroom and a wide terrace to enjoy those ocean views.

Located among the Grand Cru vineyards of Château Smith Haut Lafitte, in Bordeaux-Martillac, Les Sources de Caudalie is a 5-star hotel with a Vinothérapie Spa offering exclusive treatments in a natural setting. The treatments combine the virtues of hot spring water with the most recent scientific discoveries of the benefits of grapes and vines for skin health. Once you’ve been pampered, enjoy a feast at the two Michelin star restaurant La Grande’Vigne or bistro-style food at La Table du Lavoir.

La Réserve is located a stone’s throw from the Champs-Élysées overlooking the Grand Palais, Eiffel Tower and Panthéon in Paris. It has all the elegance of a 19th-century private apartment where ultra-personalised services can be tailored to your requirements. It boasts more suites than rooms, a library reserved for guests and their friends, a smoking lounge, 16m indoor pool and wine cellars in the suites. If entertaining in style, the menu at its Michelin two-starred Le Gabriel restaurant revisits the great classics of French gastronomy.

Offering historic charm in central Paris, this luxury hotel has superb views of the Palais Garnier, home to the esteemed Paris Opera. It has an illustrious history of hosting Paris’ most exclusive events and its Salon Opera ballroom has been magnificently restored.

Votes were cast by travel industry professionals and the public, with the nominee gaining the most votes in a category named as the winner.

Graham Cooke, World Travel Awards founder, says: “Our winners represent the very best of Europe’s travel and tourism sector and my congratulations to each of them. They have all demonstrated remarkable resilience in a year of unprecedented challenges.”

Previous Article Who are the French stars of Emily in Paris?
Next Article Win a copy of The Adventures of Dofesaba II 2018 by Peter Bell